House prices in regional NSW have climbed at a faster rate than those in Sydney over the past year, new data shows, soaring by $500,000 in some popular coastal pockets. 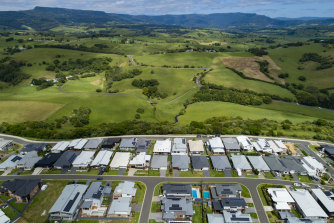 However, experts say price growth may have peaked in many markets, with demand from Sydneysiders easing as more people return to CBD offices, and rising mortgage rates and stretched affordability weighing on buyer demand.

The Snowy Monaro Regional Council area recorded the largest house price jump for the year, with the median increasing 63 per cent to $660,000.

It was followed by the Kiama, Lismore and Byron local government areas, where house prices lifted more than 40 per cent. Median house prices in Kiama ($1.6 million) and Byron ($1.8 million) jumped by $500,000 and $550,000 respectively, and are higher than Greater Sydney’s median of about $1.59 million.

While Sydney’s sharp house price growth stalled over the quarter, lifting a marginal 0.2 per cent, the median for the rest of NSW lifted 2.8 per cent and is up about 28 per cent for the year — outstripping Sydney’s annual growth of 21 per cent — to hit $730,000.

Domain’s chief of research and economics Dr Nicola Powell said heightened demand from sea and tree changers and those looking for secondary homes during the pandemic had pushed up prices and pushed out local buyers in some communities.

“These rates of price growth are unsustainable long term and are particularly painful for local buyers who can’t compete with somebody with deeper pockets coming from Sydney,” Powell said.

Such out-of-area demand was easing, as more workers returned to CBD offices, resulting in a slowdown in price growth in some markets, she noted. However, she expected areas close to cities and regional centres would continue to attract strong buyer interest.

“[There’s a] need to address the supply side in these regional areas, to look at land releases and how [governments] are going to address the affordability of new supply,” Powell said.

Barrenjoey chief economist Jo Masters felt the flight to the regions had peaked. The pandemic had likely brought forward demand, and she expected some who relocated may look to return to cities in the coming months and years.

“We might start to see people going, it’s actually not as easy as I thought to commute three days a week from 150 kilometres away,” she said.

Increased interest from investors off the back of rapidly rising rents and Snowy 2.0 was also a key factor, particularly in Cooma. The supply of new homes in the region had also been limited. 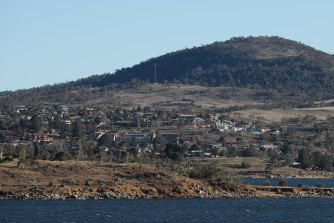 The median house price in the Snowy Monaro Regional Council area lifted almost $255,000 over the year to March.Credit:Alex Ellinghausen

However, there had been a significant shift in recent months, Henley said, with a slowdown in relocating Sydneysiders, the upcoming election, rising inflation and stretched affordability reducing buyer demand.

“The market is not in the fear of missing out stage anymore, there’s now more a fear of paying too much,” he said.

Prices in the region more than doubled in the past five years, as did those in the Byron, Eurobodalla and Yass Valley regions. Prices in the Bega Valley, Lismore, Orange, Kiama and Ballina were up more than 90 per cent.

In Kiama, the “insane” property price growth has come to an end, said selling agent Owen Taylor of First National Coast & Country. While homes were still selling well, some heat had come out of the market and there was a more even balance of out of area and local buyers. 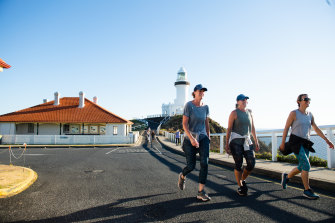 Property prices in Byron Bay have more than doubled in the past five years. Credit:Elise Derwin

“The craziness, where we were having 40 or 50 groups at any open home, is over, now we might get a calmer 10 to 15 [groups] which is still extremely healthy,” he said.

Prices could not go up forever, he added, and put the shift down to affordability constraints, the prospect of rising interest rates and the upcoming election.