Did I just time-travel in a DeLorean? What's this I hear about Crowded House having a new single?
It's true. The band just released their first new music in more than a decade, a single titled Whatever You Want. 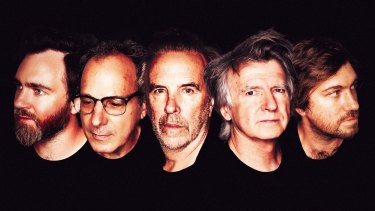 Crowded House are back with a new lineup and their first new music in over a decade.Credit:EMI

That's unexpected.
Yes, and so is the music video, directed by Nina Ljeti (Phoebe Bridgers' Kyoto) and starring Gen Z indie icon Mac DeMarco. More than 35 years on and Crowded House are still doing it for the kids. "Waking up with the fear after last night's revelry. We can all relate to that. Thanks to Mac for working through the pain and showing us redemption," Neil Finn said of the video.

What's the song like?
It's a short and bouncy number hinged on a slinky bassline, jangly guitars and echoing harmonies, contrasting with bitter lyrics: "Some people will tell you whatever you want, keep you in your place."

Trump?
Sure, isn't everything?

Shouldn't Neil Finn be out moonlighting as Lindsey Buckingham in the new-look Fleetwood Mac?
He has been, and he toured the world with them for over 80 shows on their 2018-19 An Evening with Fleetwood Mac tour. But with the band busy re-enacting viral TikTok videos lately, it's perhaps understandable Neil had some time to turn his attention back to The Crowdies. The reformed lineup was even supposed to headline this year's Blues and Roots Festival in April, before the pandemic struck.

This isn't the first time the band's reunited?
Not in the slightest. After their famous farewell shows outside the Sydney Opera House in 1996 and the death of original drummer Paul Hester in 2005, an altered lineup emerged in 2007 for albums Time On Earth and Intriguer. After a slight hiatus, the band reunited again in 2016 for a 20th anniversary reprise of their farewell gigs.

So who's even in Crowded House now?
It's pretty much a family affair. Alongside Finn, original bassist Nick Seymour and the band's original producer Mitchell Froom on keyboards, the lineup now features Neil's sons Liam on guitars/vocals and Elroy on drums.

Does this mean we can expect a new Crowded House album soon?
No announcement yet but it's likely. Neil hinted as much in a blog post in the Before COVID times, aka December 2019, when he first revealed the new lineup and suggested "new music" was on its way. In the meantime, they've already announced dates for some live gigs.

Live gigs? Where, in their dreams?
No, in New Zealand where there are no restrictions on mass gatherings or social distancing requirements. It's a 10-date tour with the first gig set to be held in Hamilton on March 4.