Happy Swedish National Day! Crown Princess Victoria is joined by her children Estelle, 10, and Oscar, 6, in traditional dress as they lead celebrations in Stockholm

Crown Princess Victoria was joined by her children Princess Estelle and Prince Oscar, in traditional dress as they lead celebrations for National Day in Stockholm today.

Dressed in a yellow and blue folk costume an adorable Princess Estelle, 10, walked hand-in-hand with her father Prince Daniel in Stockholm as the royal family marked the start of the celebrations.

She was accompanied by her mother Crown Princess Victoria, 44, who looked equally festive in the traditional ensemble, her father Prince Daniel, and her brother Prince Oscar, six, who both wore suave blue suits.

Swedes celebrate their National Day on 6 June in honour of two historical events: on 6 June 1523, Gustav Vasa was elected king and, on the same date in 1809, the country adopted a new constitution. It became a public holiday in 2004.

Crown Princess Victoria, 44, was elegant wearing a traditional Swedish outfit as she gave a speech on National Day 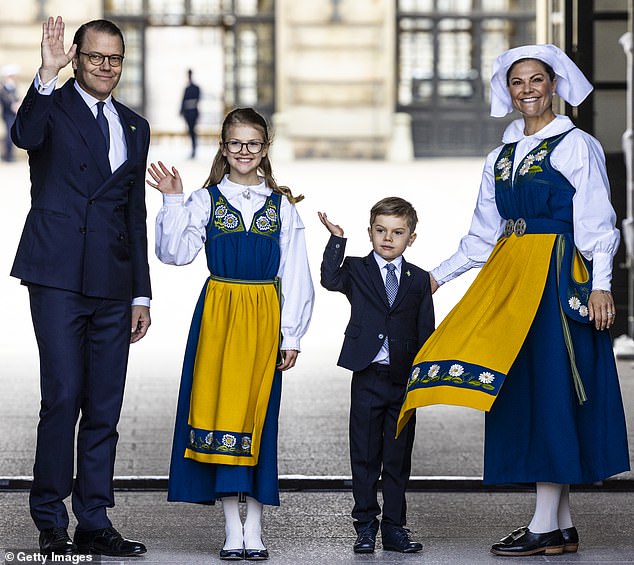 The royal was joined by her husband Prince Daniel and their children Princess Estelle, 10, and Prince Oscar

Mother and daughter were matching in the blues and yellows of the ‘Sverigedräkten’ folk dress costume, consisting of a white shirt or blouse, blue skirt or dress and a yellow overskirt, in the colours of the Swedish flag.

But the 44-year-old wore a white headscarf with her outfit, which symbolises that she is married, unlike her young daughter.

She kept her makeup minimal and completed her look with silver earrings, and grinning as she smiled and waved at the public along with her family.

Meanwhile, her husband and son were also wearing similar outfits, opting for blue suits and ties. 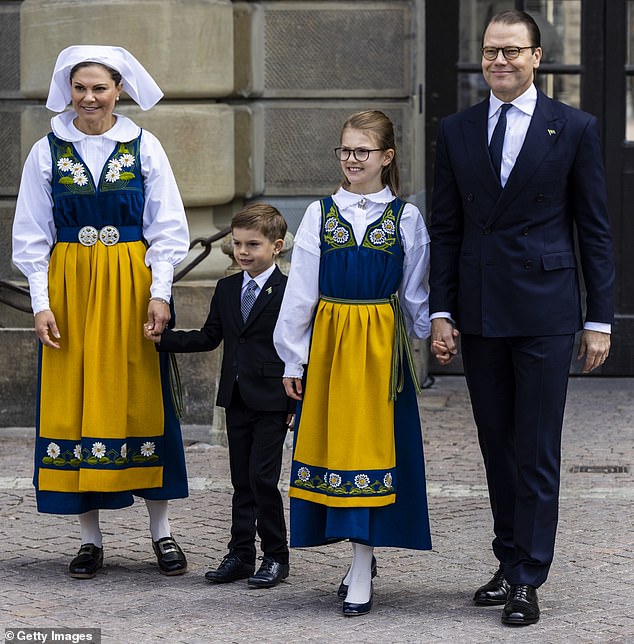 Every year the King and Queen take part in a ceremony at Skansen, Stockholm’s open-air museum, where the yellow and blue Swedish flag is run up the mast, and children in traditional peasant costume present the royal couple with bouquets of summer flowers.

Other festivities which usually take place on the National Day of Sweden, also known as Svenska Flaggans Day (Swedish Flag Day) include a ceremony at Skansen which is Stockholm’s open-air museum.

The Swedish flag is raised and children present the King and Queen of Sweden with bouquets of summer flowers.

The Swedish parliament voted to make the day a public holiday in 2005.

Crown Princess Victoria held her young son’s hand during the ceremony on Sweden’s National Day, which was made a public holiday in 2005 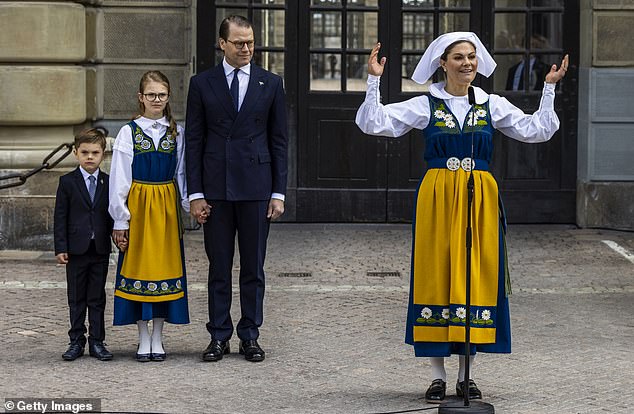 Crown Princess Victoria’s appearance for the National Day of Sweden with her family comes after she attended the Polar Music Prize ceremony at the end of last month with her husband.

They were also joined by her father King Carl XVI Gustaf, 76, and his wife Queen Silvia, 78, and Prince Carl Philip.

Victoria, Crown Princess of Sweden looked chic in a black bardot off the shoulder jumpsuit for the occasion.

The royal family attended the award, which is often described as the Nobel Prize of music.

It celebrates two laureates, one contemporary and one classical, for significant achievements in the music industry.

The 2022 laureates were presented with their prizes by His Majesty King Carl XVI Gustaf of Sweden at the gala prize ceremony.