The head of Australia’s cyber spy agency will declare that it is deeply engaged in offensive operations against adversaries, warning the future of warfare was likely to begin in cyberspace.

Australian Signals Directorate boss Rachel Noble will also suggest that it is impossible to draw a line between its offensive and defensive capabilities, saying the agency has to be “poacher and the gamekeeper”. 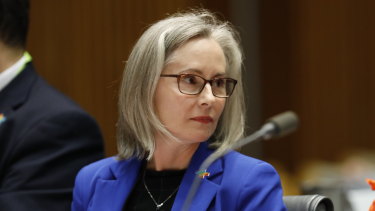 There has been an internal debate within the federal government about whether Australia’s defensive cyber security remit should remain within ASD or move to another agency, while Labor has said it would establish a national anti-scam centre.

The Australian Cyber Security Centre, which is responsible for monitoring and responding to cyber threats targeting Australian interests, currently sits within ASD.

Ms Noble’s description of her agency’s offensive capabilities includes the most detail an ASD head has revealed about those operations.

“The youngest of ASD’s functions, offensive cyber started out as a boutique effort using computer network attack and covert online operations to disrupt terrorist threats,” Ms Noble will say in a speech at the National Press Club in Canberra on Thursday.

“Since then, offensive cyber has been fully integrated into ASD’s signals intelligence and cyber security functions and is a mature component of the OneASD mission – to protect our national security.”

Ms Noble will also say the two roles should not be split because the agency that has offensive cyber capabilities is best placed to defend against attacks.

“The idea that we could draw a line somehow between these functions would take away the very cutting edge that Australia has, and needs, over our adversaries,” she will say, according to a draft of the speech.

“In ASD those functions are fully integrated, our people move seamlessly among those teams, and we are committed to continuing to ensure we are one ASD team in pursuit of one mission – to protect the security of Australia.

“Sometimes in public discussion, there is contemplation of a stand alone cyber security agency. For the reasons I have just outlined, this is why I would counsel against it.”

Prime Minister Scott Morrison last year revealed a wave of sophisticated cyber attacks on all levels of government, industry and critical infrastructure including hospitals, local councils and state-owned utilities. Australian security agencies believe China was behind the cyber raids, but the government decided not to publicly name the state actor involved.

Ms Noble says the future of warfare was predicted by some to be “more likely to begin in cyberspace”.

“In cyberspace, ASD is increasingly becoming the first and last line of digital defence that protects our country from cyber attacks, and thwarts those who seek to attack Australia by launching offensive cyber operations of our own,” she will say.

“And we are right now fighting that battle with criminals – state actors and serious and organised crime.

“And to be very clear, under Australian law we consider both state actors and serious and organised criminals to be undertaking criminal activity when going after Australian networks.”

Ms Noble will say that 25 per cent of cyber security incidents the ASD responded to last year were against the nation’s critical infrastructure including energy, water, telcos and health networks.

“Some were state actors undertaking intelligence gathering, reconnaissance and pre-positioning malicious software most likely with a view to activate it at a time of their choosing to deny, degrade or disrupt critical services to Australians.

“Our goal is to defend our networks by pushing them off before harm is done and to undertake offensive cyber operations to deny them the benefits of their crime.”

She will say the ASD wants to send a clear message: “that the cost an adversary would incur in threatening our interests outweighs the benefits of doing so”.

“We are here to make an adversary think: today is not the day,” she will say. “We are, as some say, the poacher and the gamekeeper.”

Ms Noble will also warn that Australia is heading into “one of the most strategically uncertain times of my generation and perhaps even the generation before me”.

“We are at the crossroads, some are opining, of a potential major global power shift.”