DAN HODGES: Stop playing ‘whack a mole’, Boris Johnson – or it WILL be YOU who gets whacked

Boris loves the whack-a-mole line,’ a Minister reveals. ‘It’s clear he came up with it himself. If you’re in a meeting with him, he’ll keep using it.’

He shouldn’t. Whack-a-mole – the children’s game involving a frantic but futile attempt to batter the furry mammal into submission – was originally coined to describe the strategy of placing Covid-19 hotspots swiftly into local lockdown. But after days of chaos and confusion, it’s starting to characterise the entire Government.

It began with senior Ministers directly contradicting each other over the use of masks. Then there was further turmoil over whether or not people should be returning to work. 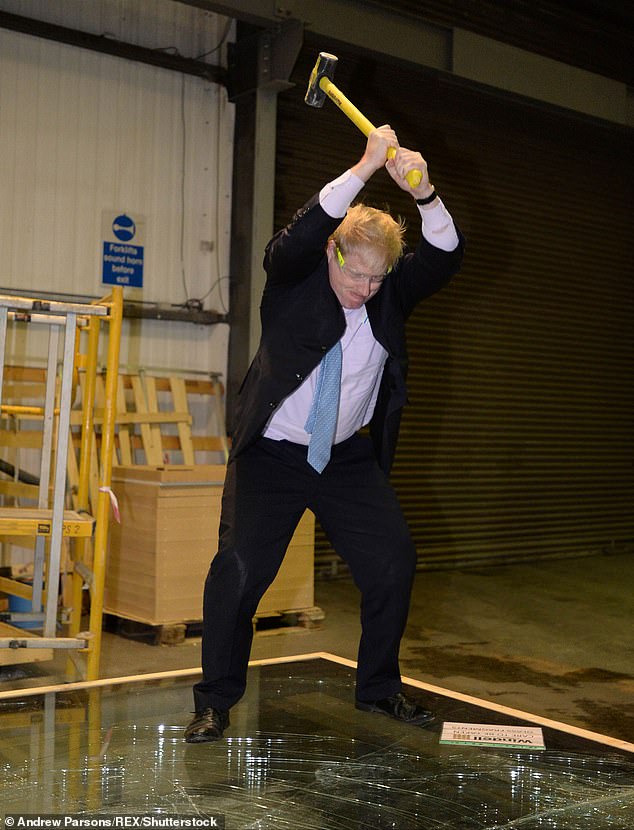 Boris Johnson attempts to smash bullet proof glass with a sledge hammer while on a visit to Windell Ltd in Magherafelt, Nothern Ireland, in February 2016

Finally, Health Secretary Matt Hancock was forced to conduct an urgent review into Public Health England’s coronavirus death statistics, after it emerged the quango had been registering anyone who died at any point after contracting the disease as a Covid-19 fatality.

The plan within No 10 was that this would be the week when Boris began to lay out a road-map for a ‘return to normality’. But it ended with the Government’s chief scientific adviser, Sir Patrick Vallance, warning: ‘It’s highly likely that this disease will continue to circulate and come back in waves and may well be seasonal.’

Some people saw Sir Patrick’s comments as evidence of a widening split between scientists and their political masters over the next stage of the pandemic response. But in truth it simply reflects a broader divide within Government – one that’s destroying any attempt at providing a clear, coherent message on how lockdown is to be ended.

Soon after being elected Mayor of London, Johnson was asked who his political hero was. He replied it was the cynical mayor from the film Jaws. ‘He kept the beaches open,’ he explained. Mayor Larry Vaughn did. But he didn’t just open the beaches. He also proudly announced a large shark had recently been caught, and the water was now perfectly safe.

With the mandatory imposition of masks, warnings that it is not yet appropriate for everyone to return to work, and preparations for a second major winter outbreak, the Government is effectively saying: ‘The shark’s still out there. If it catches you, it will eat you and your family. But if you keep your eyes peeled and your wits about you, you’ll probably be fine.’

Anyone walking around a ghost- like Central London last week will have been only too aware how well that message is going down. Speak to a Minister, MP or adviser and they will immediately start spouting the ‘C-word’ – Confidence. ‘It’s the only thing that will save us from total economic implosion,’ one explained to me. ‘We have to give people confidence they can start to live their lives again. We’re hoping making masks mandatory will give them that sense of security.’

But public confidence will be secured only if the Government looks as if it’s on top of the crisis. And last week Ministers looked like a rabble. ‘The problem is at the top,’ one explained. ‘Boris just isn’t focusing at the moment. I was in a briefing with him a few days ago and it just wasn’t registering. I thought, ‘What am I doing here?’ ‘

But it’s not just that the Prime Minister doesn’t seem to have a grip on his Government. It’s as if he no longer wants it to be seen as his Government at all. No one within Whitehall even pays lip-service to the existence of a Boris strategy any more. All the talk within Government departments is of The Gove Plan or The Cummings Plan or The Sunak Plan.

When Michael Gove said on Sunday morning ‘It’s always best to trust people’s common sense’, rather than making the wearing of masks mandatory, it was viewed as another example of chaotic messaging. But some insiders saw it as something more. ‘Michael never does anything by accident,’ one Minister told me.

There’s been talk for months about the Chancellor of the Duchy of Lancaster becoming de-facto chief executive of the Government, to Boris’s chairman of the board. But if that is the ambition, at the moment the CEO has too many things coming across his desk.

Gove is leading the Brexit negotiations. Two weeks ago, he made a major speech unveiling an audacious plan for root-and-branch reorganisation of the Civil Service. He is said to be working closely with Dominic Cummings on further centralising control in what is being dubbed ‘The Office of the Prime Minister’.

All of which may represent radical and much needed reform. But up in the ‘Red Wall’ seats the Tories stormed in December, the priority is not of the identity of the National Security Adviser or the number of press officers in the Department for Education. It’s about when will we genuinely set foot on the road back to normality.

All this talk of CEOs and chairman is great for Westminster-watchers. But in Britain we traditionally have a Prime Minister. And he needs to stop playing whack-a-mole, and get a grip on his Government. The country needs clarity. Is it safe for us to go about our lives again, or is it not?

There are no risk-free options in life. Everyone understands the danger posed by Covid will not vanish overnight. But if we can go into a shop today without a mask, and the number of Covid cases is declining, the people deserve an explanation of why it won’t be safe in a week’s time. The country also needs consistency. Are we trying to bolster national confidence, or destroy it? Giving everyone a £10 restaurant voucher is all very nice. But when set against talk of mass vaccination programmes, a reopening of the Nightingale hospitals, and deadly second, third or fourth pandemic waves, it won’t be enough to convince us all to rush out and embrace the new Roaring Twenties.

If the virus comes at us again, we must be ready. But in the meantime we all need a break from apocalyptic scenarios that may never come to pass.

And we need one other thing.

The country’s priorities must again become the Government’s priorities. Every minute of every hour of every Minister’s day needs to be focused on getting Britain out of lockdown and back to work.

Civil Service reform, super-forecasting, who chairs this or that committee – each of these worthy but unimperative pet projects needs to be set aside for another day. A day when we are not confronting the worst pandemic for a century, and the spectre of the worst economic downturn since the Second World War.

The era of whack-a-mole Government must end. Or else the person who ends up getting whacked will be Boris himself.