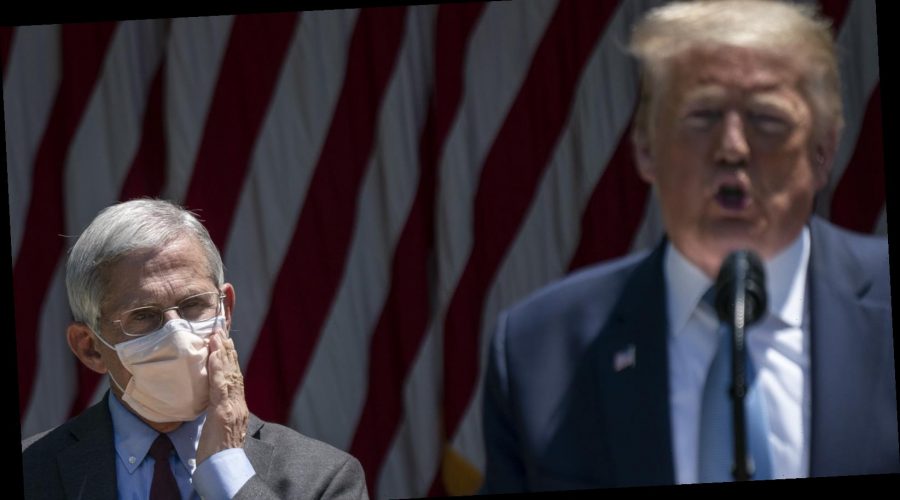 Donald Trump only left office a few days ago, but already comparisons are being made between how the long-suffering Dr. Fauci behaved at his briefings versus President Joe Biden’s. As this handy, side-by-side video from The Recount showcases, Fauci generally looked exasperated, confused or just plain annoyed during Trump’s briefings while he’s downright giddy during Biden’s. All joking aside, though, Fauci remained resolutely professional during Trump’s presidency. His facial expressions, however, told a different story.

The head of the National Institute of Allergy and Infectious Diseases admitted, during his first press briefing for Biden on January 22, “The idea that you can get up here and talk about what you know, what the evidence, what the science is and know that’s it, let the science speak. It is somewhat of a liberating feeling” (via CBS News). Although Fauci insisted he didn’t like being the one who publicly disagreed with the president, his relief was evident. Now, the medical expert is opening up about just how frustrating it was trying to work under Trump.

Dr. Fauci was in an impossible position

During a lengthy chat with the New York Times, the longtime presidential adviser, who’s worked with seven different administrations from Ronald Reagan up to now, described himself as the “skunk at the picnic.” Fauci was stymied by his role in Trump’s coronavirus task force, which often made the public health expert feel as though he was “complicit in the distortions emanating from the stage” during the president’s frequently off-the-rails briefings.

Resigning wasn’t an option, however, as Fauci knew, “someone’s got to not be afraid to speak out the truth.” The administration consistently tried to play down the threat of COVID-19, forcing Fauci to reiterate how dangerous the situation was to people who clearly didn’t want to hear it. Even his wife suggested stepping down, but Fauci “felt it would be better for the country and better for the cause for me to stay, as opposed to walk away.”

The presidential adviser know his worth

Trump often sent his loyal supporters after Fauci, leading to deafening “Fire Fauci” chants at his rallies, which the then-president often publicly teased (“It was just, you know, Donald Trump being Donald Trump” Fauci reasoned to the Times). The highly-respected medical expert stood accused, among other things, of creating the virus for profit, leading Fauci’s family to receive horrifying death threats. However, he remains utterly committed to the cause.

As the director of the National Institute of Allergy and Infectious Diseases argued, “my whole life professionally has been fighting pandemics… This is what I do.” He added, “I think what I bring to the table is something that’s very much value-added. I want to keep doing it until I see us crushing this outbreak, so that people can get back to normality.” Fauci intends on continuing his work fighting AIDS once COVID-19 is under control.

25/01/2021 Lifestyle Comments Off on Dr. Fauci Reveals What Donald Trump Was Really Like
Lifestyle