Former federal staffers say alcohol is not the root cause of sexual harassment and assault problems in politics, in the wake of testimonies about MPs voting while drunk and requiring their drivers’ help to get out of Commonwealth cars because they are so inebriated.

Sex Discrimination Commissioner Kate Jenkins’ report Set the Standard describes how a ‘work hard, play hard’ ethos and frequent free alcohol in Parliament, often from lobbyists, creates an environment where some employees can be pressured into drinking. But some former staffers say pockets of white-collar corporate Australia are little different. 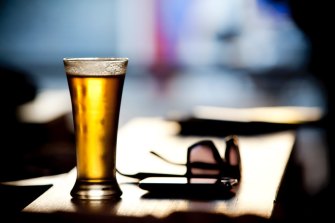 Staffers and MPs work very long hours and some drink heavily as they unwind.Credit:Arsineh Houspian

“In some situations, unsafe drinking and blurred professional boundaries fostered environments where sexual harassment or assault could occur,” the report reads.

But it also notes that the drinking does not cause bullying, harassment or assault alone and the report’s figures show pressure to consume alcohol is one of the rarest forms of bullying, experienced by just 4 per cent of those surveyed.

Former staffers who have worked in the corporate world but spoke anonymously because of their roles said the business sector did not have a different approach to alcohol to politics as a whole, instead varying between different firms and different MPs.

“It’s the exact same,” one former staffer said. “Every company I’ve ever worked for I’d say they’re on par, if not worse.”

Drinking, she said, could be an enjoyable way to unwind and was sometimes used as a scapegoat for the problems in Parliament House, which instead lay with the parties, culture and people.

Labor’s shadow minister for women, Tanya Plibersek agreed with that sentiment at a press conference on Wednesday.

“I think alcohol can be an exacerbating factor, but the root cause of bad behaviour is gender inequality, inequality in power relationships, the feeling that many staff have that they could be dismissed at the whim of their employer,” Ms Plibersek said. “Those sorts of power imbalances really are at the heart of the problem.”

Steve Knott, chief executive of the resources industry group AMMA, said in his sector alcohol bans were common both on worksites and in corporate offices. Mr Knott did not advocate for that in politics, but said MPs had to ensure they were fit for duty when Parliament was in operation.

Ms Jenkins’ report does not recommend banning alcohol in Parliament but calls for an alcohol policy “with a view to restricting availability in line with work health and safety obligations, and the principle of harm minimisation.”

Labor leader Anthony Albanese already has a dry office, except for his suite, according to testimony in the report and the party will run an alcohol-free free campaign headquarters for the next election, joining the Liberal Party, which has banned drinking at its campaign office since John Howard was Prime Minister.

“That is now broadly recognised in the modern workplace,” Dr Allen said. “So the recommendations on responsible drinking guidelines in Parliament House are very welcome.

“This will help bring Parliament House in line with other workplaces in Australia. We all want to make sure all women are safe in the workplace but more than that we want to encourage and inspire women to wish work here.”

01/12/2021 Lifestyle Comments Off on Drinking not the cause of bad behaviour in Parliament, former staffers say
Lifestyle