The election's over. But how do you feel about the result?

Voting can have a big impact on the mood of a nation. Just look at the last time America elected a president. 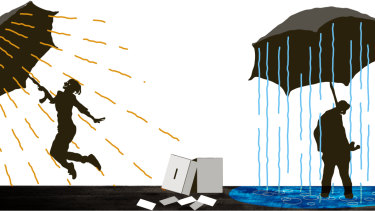 The day after Republican Donald Trump pulled off his unexpected victory in 2016, happiness levels plunged among those who identified with the losing Democrats.

The collective despondency showed up in the Gallup Healthways survey which asks a sample of Americans to rate their own wellbeing every day.

It revealed a steep drop in life satisfaction reported by Democrats in the wake of Trump’s election.

A new academic study used that survey to gauge how the past two presidential elections affected the wellbeing of the American people. 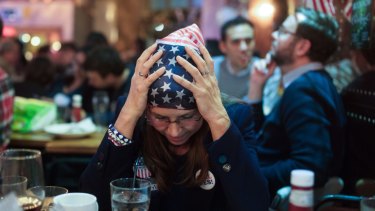 It found the decline in life satisfaction of Democrats after Trump’s 2016 win was akin to when a person loses their job or suffers a health problem which prevents normal activities. In other words, the election result caused misery for a large group in the community.

And the gloom took a long time to lift – the level of life satisfaction reported by Democratic Party supporters had still not recovered 50 days after the 2016 election.

Die-hard supporters of a sporting team might identify with this. Many people feel strongly when their side goes down, whether it’s in an election or a football match.

“The negative wellbeing effects experienced by Democrats following the 2016 election were particularly prevalent among women,” says the study by Sergio Pinto, Panka Bencsik, Tuugi Chuluun and Carol Graham titled Presidential Elections, Divided Politics, and Happiness in the US.

But election results cut both ways, of course. Four years before Trump’s victory the wellbeing of Republican supporters slumped when his predecessor in the White House, Barack Obama, won a second term. The magnitude of the wellbeing decline among Republicans after the 2012 election was less pronounced than the effect on Democrats four years later.

Being on the losing side of either the 2012 election or the 2016 election tarnished how people perceived the strength of the economy and their own financial wellbeing.

But does supporting the election winner make people happy?

Surprisingly, the researchers who examined the impact the two presidential election results couldn't find a noticeable surge in happiness among the supporters of the triumphant candidates.

The overall conclusion is sobering: the aftermath of the last two presidential elections seems to have produced a net decline in America’s happiness.

Although a separate 2005 study conducted across multiple countries found people are considerably happier when the party they support is in power, even after taking account of domestic economic conditions.

There are other important links between voting and life satisfaction.

Not only are happier people more likely volunteer in the community and donate money to charity – they are also more predisposed to engage with politics.

In countries where voting is optional, for instance, people reporting higher levels of life satisfaction are more likely to turn out for elections.

According to the World Happiness Report, published last month, very happy people "are around 9.3 percentage points more likely to be interested in politics than not at all happy people" after adjusting for a range of demographic factors.

In America those who work on political campaigns and contribute to political candidates tend to report relatively high levels of life satisfaction.

Unhappy people, however, are prone to be disengaged from politics. They are also more likely to vote for populist causes.

The Brexit referendum is a case in point. Research has shown a disproportionate share of leave voters also had lower levels of life satisfaction.

According to one study, those who reported being “dissatisfied with life overall” were about 2.5 percentage points more likely to answer yes to the question of whether the United Kingdom should leave the European Union.

There’s evidence that happier people are more likely to vote for incumbent parties.

For a long time the key indictor of a government’s success has been economic growth as measured by gross domestic product. That’s not surprising – there’s a swag of international evidence that incumbents are more likely to be re-elected when the economy is doing well.

But when researcher George Ward evaluated wellbeing data alongside general election results in 15 European countries over time he found the level of happiness among voters correlated strongly with election results.

When life satisfaction among voters was high before an election, governing parties performed well. When voters were relatively miserable, governments were thrown out.

There was a “clear and significant positive relationship” between national happiness in the run-up to general elections and the subsequent electoral success of governing parties.

“This has significant implications for the electoral incentives that politicians face while in office,” Ward wrote in the World Happiness Report.

“There appears to be a significant electoral dividend to improving happiness, beyond ensuring a buoyant economic situation.”

The upshot? Governments that hope to be re-elected should devote much more time and energy trying to understanding what makes voters happier, not just richer.

18/05/2019 Lifestyle Comments Off on Election results can make you miserable, but can they make you happy?
Lifestyle