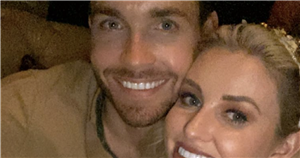 The blonde reality star, 28, took to Instagram to share a picture with her new beau on Sunday 29 August, with the caption: "Good things come to those who wait," alongside a heart eye and Champagne emoji.

Posing in front of a Ferris wheel, Amy flaunted her toned legs as she stunned in a gold dress and heels while her boyfriend wore a white shirt, black trousers and a bow tie.

Amy was inundated with messages from her 1.1million Instagram followers and posted a loved-up selfie of the pair to thank her well-wishers.

She penned: "Thanks for all the lovely messages! We are very happy and to everyone saying this has given them hope, don't settle! Wait for the right person they will come."

But what do we know about Sam? Let's take a look… What does Sam do?

Sam is a 6ft model, according to Morello Bookings.

He is also an entrepreneur and studied International Business at Bournemouth University.

According to his LinkedIn, Sam is the co-founder of tech company VIVACITY, which he set up in 2015, which helps to connect brands with customers in China.

What has Sam starred in?

The model featured in supermarket Aldi's 2016 Easter advert where he starred as a topless hunk.

Sam is seen mowing the lawn in the ad before an office full of women rush to the window to see the shirtless gardener in action.

Opening two packets of hot cross buns, the gardener throws the baked goods over himself as he closes his eyes in the slow-motion scene.

Where is Sam from?

Sam is based in London, according to his Instagram, and has garnered 17,600 followers.

It comes after Amy teased her new romance by sharing a message from a fan which read: "Amy! You seem to have really come out of your shell and have a new found confidence and fabulous-ness recently!! Whatever has changed, keep it up because you just seem so happy!"

The star then answered the fan by writing: "This is why…" before sharing the photo of herself and her new man.

Amy hit the headlines while in Love Island in 2019 after her romance with Curtis Pritchard came to an end.

She previously explained to OK! that while she and Curtis don't speak every day, they do get along and enjoy each other's company now.

"I mean, we don't speak often. We message occasionally, just to check in," she said.