The union representing Victorian state school teachers and principals has taken the first step towards industrial action, including a possible statewide strike, over its stalled workplace agreement negotiations with the Andrews government.

As tensions rise between “exhausted” teachers demanding a 7 per cent annual pay rise and a state government intent on tightening its public sector wage bill, the Australian Education Union’s Victorian branch unanimously agreed on Friday to finalise plans for a ballot where teachers would vote on what action to take. 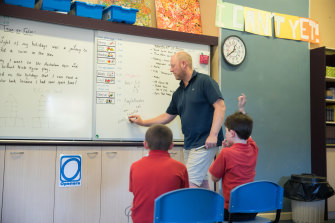 The union says teachers are exhausted and working an average of 15 hours’ overtime a week.Credit:Simon Schluter

A strike would follow if the dispute was not resolved. The last strike occurred under the Baillieu government in 2012 when thousands of teachers filled Rod Laver Arena in protest.

Teachers and principals want a wage increase amounting to 21 per cent over the next three years, along with significant cuts to face-to-face teaching hours, and 16.5 per cent superannuation.

Class sizes would shrink to a maximum of 20 students at all year levels under the union’s log of claims, down from current maximums of 26 at primary level and 25 in secondary schools.

The 7 per cent request is at odds with the Andrews government’s decision to tighten its wage policy in the May budget so public servants’ annual wage increase would drop from 3 per cent (including wages and entitlement) to 2 per cent from January.

It was one of several cost-saving measures as the state contends with an expected $11 billion deficit by next July due to the coronavirus pandemic.

Goodwill remains between the two parties but the union has grown frustrated at the government’s failure to make an official offer despite 50 negotiation meetings dating back to December — the equivalent of about seven a month — and the existing workplace agreement expiring in April.

It still expects to sign a deal before the new wages policy comes into effect next year.

The union’s Victorian president, Meredith Peace, has repeatedly warned the state’s “underfunded” school system was driving thousands of teachers out of the profession. 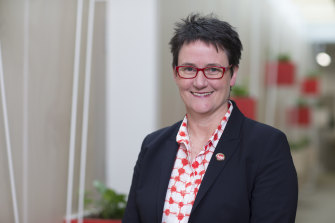 A union survey of 10,800 government school staff found four in every 10 Victorian state school teachers were considering switching jobs and that they work an average of 15 hours of unpaid overtime a week.

The requested 7 per cent pay rise each year exceeds the 3.5 per cent increase granted to Victorian train and tram drivers last year and 3 per cent rise given to public sector nurses and midwives.

RMIT economist Leonora Risse, who specialises in the economics of education, said teacher and skills shortages were a real risk and could become an acute problem if staff felt they were underpaid.

She suggested school education should be viewed as an investment in the future, akin to the Reserve Bank of Australia’s recommendation that state governments invest their way out of deficit.

The union has also called on the Andrews government to cut face-to-face teaching hours to 18 per week, down from the current 22½ hours in primary school and 20 hours in secondary school. 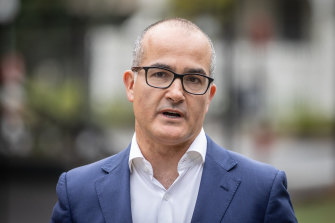 Education Minister James Merlino’s department has been in discussions with the union since December.Credit:Simon Schluter

Jordana Hunter, school education program director at the Grattan Institute, said the past 18 months had been “one of the most massive transformations of the way we deliver schooling” with extended periods of remote learning.

Ms Hunter said even when the country was fully vaccinated and school closures were no longer necessary, school staff would face a significant challenge bringing some students up to speed.

Victoria’s public sector wage bill is set to rise 9.5 per cent in the 2021-22 financial year. Speaking after delivering the budget in May, Treasurer Tim Pallas said that growth was largely down to pandemic-specific investments in areas such as contact tracing but admitted it was not sustainable.

That the AEU Joint Primary and Secondary Sector Council note the comprehensive report on the progress of negotiations for an agreement to replace the Victorian Schools Agreement 2017 (VGSA).

Whilst negotiations continue to be constructive, Council notes the failure of the Andrews government to formally address the union’s log of claims not least with respect to measures that would address the excessive workload, salaries and conditions of teacher, principal, assistant principal, and education support members.

The Joint Primary and Secondary Council authorises the AEU Branch Executive to monitor the on-going negotiations and to prepare and finalise an application to the Fair Work Commission for a protected action ballot.