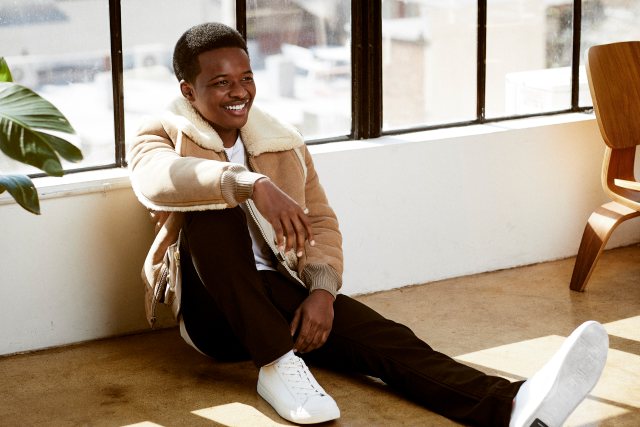 Résumé: Brown can’t remember a time when he wasn’t positive he would be in filmmaking. While completing high school on Zoom and starting his freshman year at Chapman University (still virtual but at least from the dorms), he became a U.S. Presidential Scholar in Arts and Film and a 2020 National YoungArts foundation winner in film. His breakout was scoring a part alongside Viola Davis and Chadwick Boseman in “Ma Rainey’s Black Bottom,” which now enters awards season.

Why We Care: Brown first heard of “Ma Rainey” in play form, when his brother Dante did a monologue of another August Wilson work. “I was like man, this writing is really interesting.’ My parents were like, ‘yo, you got to know who this guy is,’” Brown says. He plays Davis’ nephew, Sylvester, who Ma Rainey wants featured on her song against the wishes of Boseman’s Levee. “I learned as much as I could and tried to pick up on as much as possible. They gave me so much,” he says of working with his costars. He describes both as family: Davis as an aunt, Boseman as a big brother.

“She’s very kind, but she also has this tenacity that you can feel. You could be talking to her about Fruit Loops — it comes through in every way,” he says. “Her and Chad taught me very similar things; we had this long conversation about her career from college all the way up until now. She was telling me your time will come when your time will come, and to not take every moment for granted. Every job opportunity, it’s all part of your journey. Take it in stride and learn from every experience.”

The movie was Boseman’s last, and Brown says that watching the film now, after he has passed, can only be described as “trippy.”

“You’re watching it and you’re like, ‘this guy is so good, I can’t wait to see what he does next.’ It’s hard,” he says. “He had such warmth that exudes from him, and he was so calm. The energy that he brought, it was almost magical. He was such a strong guy, we had no clue [that he was sick]. It was two days apart from when my grandma died.”

While promoting the film’s awards campaign, he’s focused, too, on getting the feature he wrote during lockdown into production and seeing what other roles might be out there.

“I like movies that pose questions to you. Movies like ‘Waves’ and ‘Joker.’ And ‘Tenet’ — though he wasn’t making any questionable decisions, I just like action movies. And John David Washington — that guy’s a beast,” he says. “I’m down for whatever. I’m down to clown. My next dream project would be like if A24 called me and was like, ‘yo man, we got $6 million, make whatever movie you want.’”

15/02/2021 Lifestyle Comments Off on Eyes On: Dusan Brown
Lifestyle