Father builds a two-storey playhouse for his toddler daughter complete with a sleeping nook, heating and a TV for just £800 – after being quoted £3,800 by a professional

A father gave his daughter the ultimate gift this Christmas after building her a luxury playhouse – and saved £3,000 by doing it himself.

Rich Saunders, 40, from Dorset, created a playhouse in their garden complete with a split-level design, sleeping nook, heating, carpets and even a TV on the wall for his two-year-old daughter.

Spending 40 hours over multiple evenings and weekends he built the house himself using online tutorials for advice for just £800 – £3,000 less than he was quoted by a professional.

Rich, who works in digital forensics, said: ‘My wife Sophie had a playhouse built for her as a child and wanted our daughter to have the same experience, so that was the drive behind it. 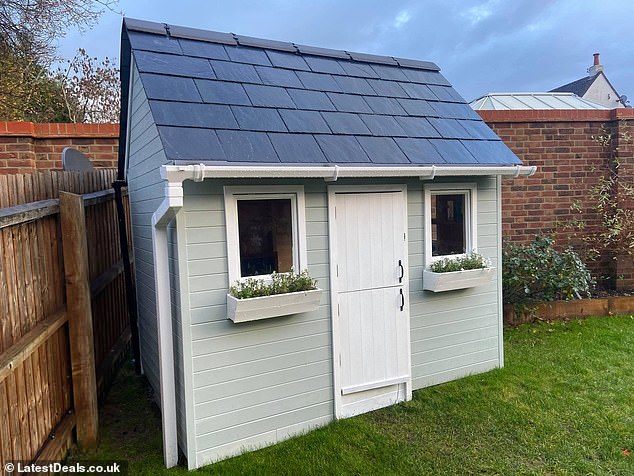 Rich Saunders, 40, from Dorset, created a playhouse in their garden complete with a split-level design, sleeping nook, heating, carpets and even a TV on the wall for his two-year-old daughter. Pictured, the outside of the sweet country cottage 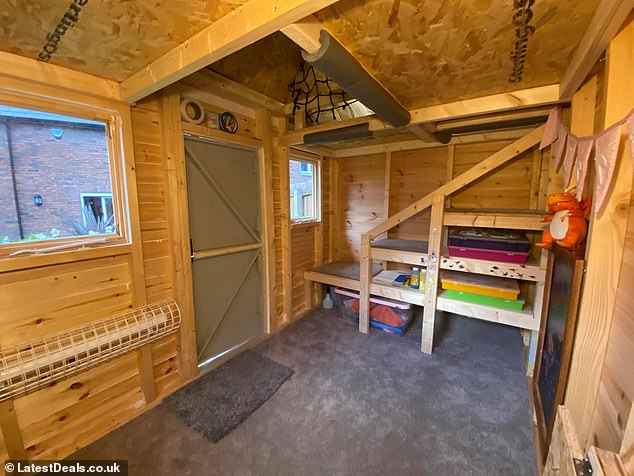 The inside of the house was fitted with a fluffy carpet, heating and insulation to make sure his daughter could enjoy it during the colder months 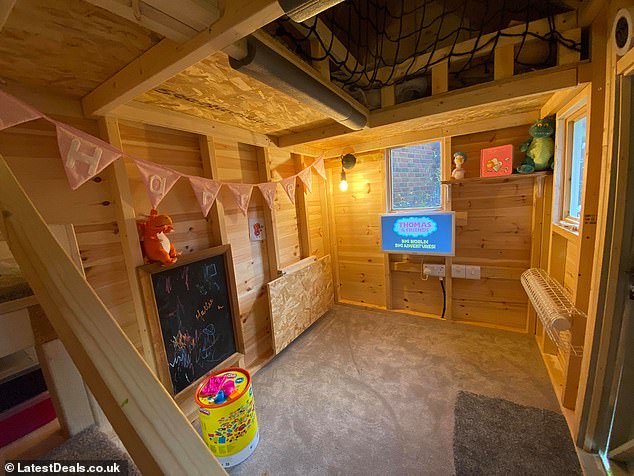 ‘We were quoted £3,800 by a tradesman to build one, however that was just for a bare shell. Plus, it wasn’t as tall as the one I ended up making. We simply couldn’t afford to spend that much on it.’

After deciding they couldn’t afford to hire the tradesman, Rich decided to make his own version, putting his passion for DIY to good use.

He said: ‘I love DIY of any kind, whether it’s working on the car or gardening, but my favourite pastime is building stuff.

‘When we moved into our house two years ago I built myself a shed, so I thought that constructing a playhouse wouldn’t be too different.

‘I started working out where I wanted it to go and drew up some very rough plans. I knew in the back of my head that these would go out of the window when I started building, however, as that’s how my brain works.’

Rich started his project by purchasing 3 x 2m timbers to make the shell.

He said: ‘I started by working out how big I wanted the playhouse to be so that it didn’t take up too much of our quite small garden. I marked out an area and removed the grass and topsoil on the plot where I wanted it to go. 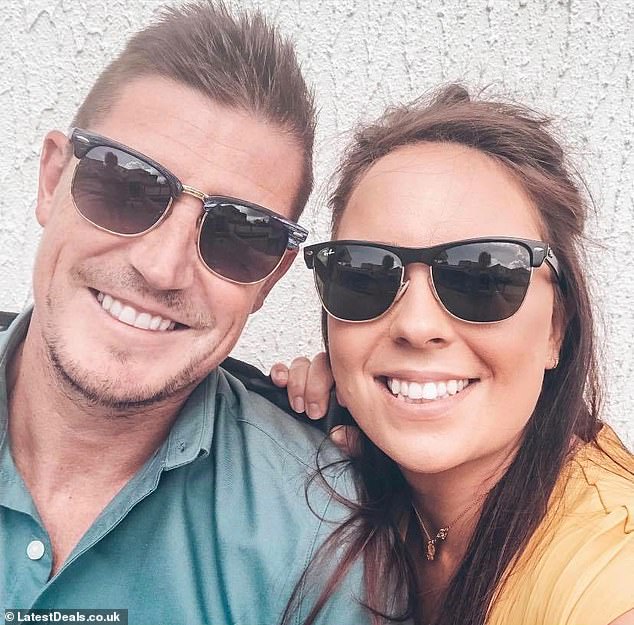 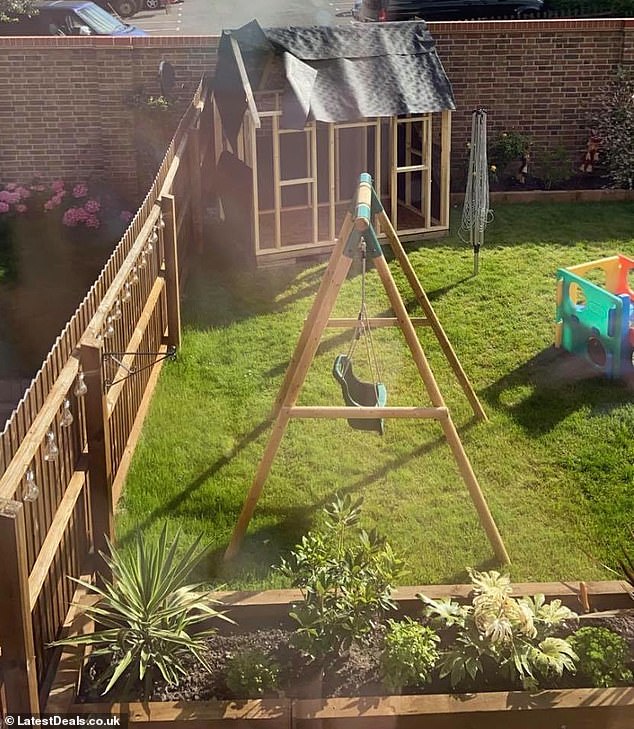 By using online tutorials, Rich was able to build the entire house himself for just £800, saving  whopping £3,000 in the process. Pictured, the frame while it was being built 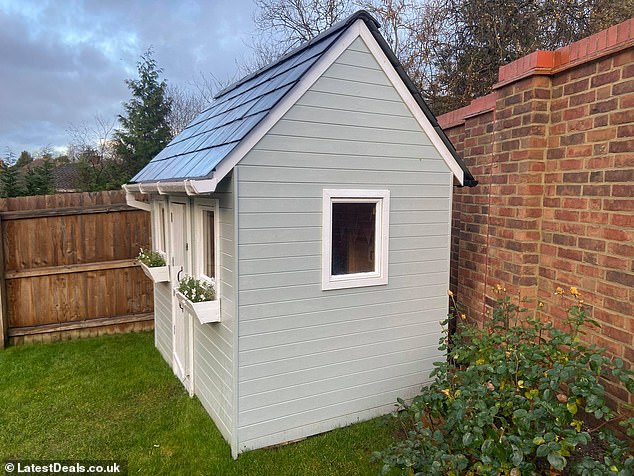 ‘Next, I mixed some sand and cement and made a base using reclaimed patio slabs. This dictated the size of the frame I was able to build, which was 2.4m wide by 1.8m deep and just under 2m in height.’

To calculate the size of door and window needed for the playhouse, Rich scaled down the sizes used in a real house. He also turned to online tutorials to him him build the roof rafters and make them waterproof.

‘I sourced the slate tiles from Gumtree for £20, which was an absolute bargain,’ he said. ‘The windows were more of a challenge.’

‘With safety in mind, I used normal glass instead of Perspex, but as I knew children would be playing in it, I did some online research and found a company who could supply clear laminated sheets that I could add to both sides of the glass. 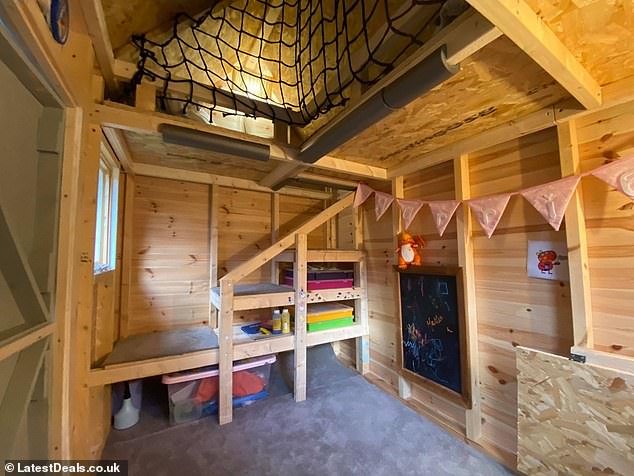 The inside of the house boasts a whiteboard, TV and room to store games and craft supplies 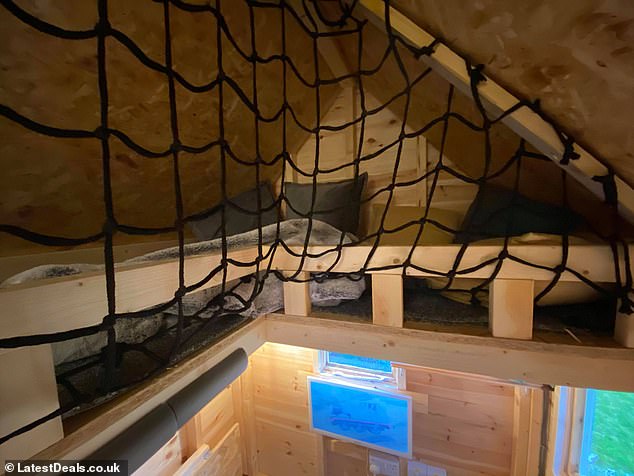 ‘This means that if the glass were to break, there would be no splinters and the whole pane of glass would stay intact.’

The playhouse was finished off with its very own guttering and window boxes as well as a final lick of paint in a shade of green to mimic a country cottage.

With the exterior finished, Rich then got to work putting together the playhouse’s interior.

He said: ‘For me, the fun really began when I could set about creating a dream environment inside. I added an upstairs nook that she could climb up to with friends. It’s possible that she may like to camp out there and even sleepover when she’s a bit older.

‘I finished the house towards the end of the summer, and it was okay to play out there at that time of the year. However, the evenings start to get colder from September so I knew that I would want an electricity supply to provide some heating.

‘A friend of mine, who is an electrician, kindly and professionally installed a couple of plug sockets so that we could use a plug-in heater.

‘He also popped in a couple of lights, which meant she could carry on playing even when it was dark outside. The TV inside was a Gumtree special.’

The final detail was the installation of a fluffy carpet so that the playhouse could be used the whole year round.

Rich said that the time and money spent on the playhouse was worth it now that he has seen how much his daughter loves the finished article. 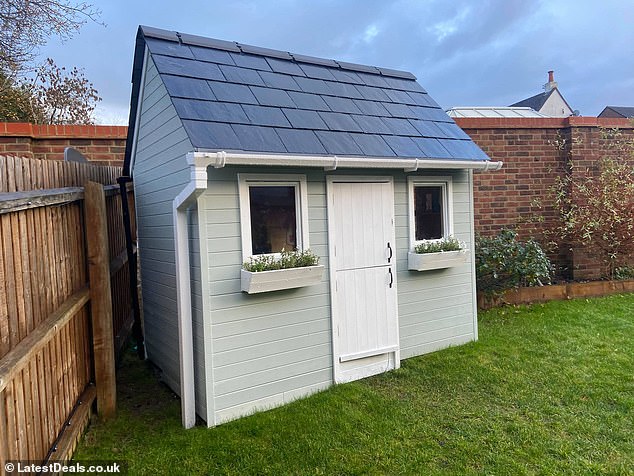 ‘I always knew I wanted the playhouse to be cute, which was my wife’s desire, but in my head I also wanted it to be a place she could also learn while having fun with the both of us, as well as her friends.

‘As she grows older, I think she will come to realise how special it is and I can see her having years of fun out there with her friends, and maybe one day a brother or sister.

‘I’m so happy with positive feedback I have received about the project. I posted some details about it in two Facebook groups I’m in and got a total of 6k likes and 1,200 comments all praising the work. It was a crazy positive reaction, which was so lovely.’

Tom Church, Co-Founder of LatestDeals.co.uk commented: ‘Rich’s playhouse is the stuff that dreams are made of and a brilliant gift from dad to daughter.

‘If the shop-bought or professionally made versions are out of your budget, it’s well worth investigating the DIY route.

‘Always seek professional advice when it comes to added extras, such as an electricity supply, to ensure the safety aspect is well covered.’