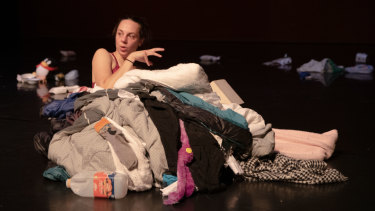 Watan Tusi, the founder of TAI Body Theatre, has spent years notating traditional dance; Sheppard more often puts aside traditional technique. What unites them is an interest in finding a contemporary indigenous expression beyond traditional ceremonies and tourist performances – and also a humorously monstrous aesthetic.

The first piece, Red Earth, is performed on a stage strewn with garbage and green mesh, representing a polluted habitat. Four dystopian creatures appear, dressed only in long wigs, underwear and day-glo body paint. From a highly alert, flat-footed step through this wasteland, they build up a pacing rhythm to a techno beat (what is it with techno in contemporary dance lately?), then slip into a shadow play of natural selection.

It takes a while to find Sheppard in her solo piece, Negotiating Home, as she is costumed as a pile of laundry. Engulfed by never-ending chores, Sheppard rolls around the stage, from a bowl of Weet-Bix, via feeding plushies, to a desperate phone call to cancel her shift at work.

Together, these (very young) artists seem to have found common ground in social critique, and a collaborative, open approach. One hopes they will continue to build a bridge between our cultures: as they are currently, both pieces suffer from a lack of context.