‘I’m sorry I enhanced my breasts’: ‘Fit Mom’ apologizes for ‘normalizing an unnatural body standard’ and has her implants removed

A fitness influencer who is best known for her controversial ‘no excuses’ workout policy has apologized for ‘normalizing an unnatural body standard’ after having her breast implants removed.

‘Fit Mom’ Maria Kang, 39, from Sacramento, California, made headlines in 2013 when she shared a photo of herself showing off her toned figure while posing with her three young sons, asking: ‘What’s Your Excuse?’

Six years later, she has admitted to her 75,000 followers that she has struggled with eating disorders, body dysmorphia, and depression — all of which were made worse by her breast implants. 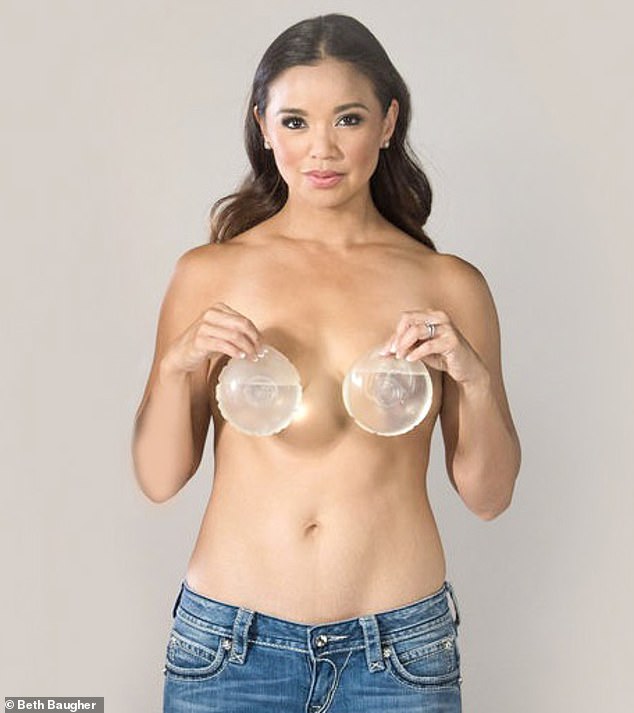 Au naturale: ‘Fit Mom’ Maria Kang, 39, from Sacramento, California, posed for a topless shoot after having her breast implants removed a month ago

Then and now: The fitness influencer had her implants for 16 years. She pictured in 2018 (left) and two weeks after her explant surgery (right)

In her latest Instagram post, Maria shared a photo of herself holding her bare breasts with her hands after having in implants removed.

She explained in the caption that it took her years to finally convince herself to have them taken out, even though they caused her a great deal of physical and mental anguish.

‘I don’t like regrets, but I have a few in life,’ she wrote. ‘As I look at my scarred, numb and deflated breasts today, I regret ever thinking they weren’t good enough. I fell into the insecurity trap.’

Maria was an aspiring fitness model and about to compete in a national competition in the Philippines when she decided to get breast implants in 2003.

She opted for 225 cc saline implants that were placed underneath the chest muscle, taking her from an A cup to a full B cup.

‘I remember the day I made the decision to augment my breasts clearly. I didn’t research,’ she recalled. ‘I never thought about needing or wanting it before. But, when I was told it was something I “had” to do to win — I did it. Without question.

‘A part of me died that day,’ she said, explaining that she spent years struggling with binge eating, bulimia, body dysmorphia, and depression.

She admitted she felt ‘disconnected’ in the objectification of her body but was too ‘scared and insecure’ to have her implants removed. 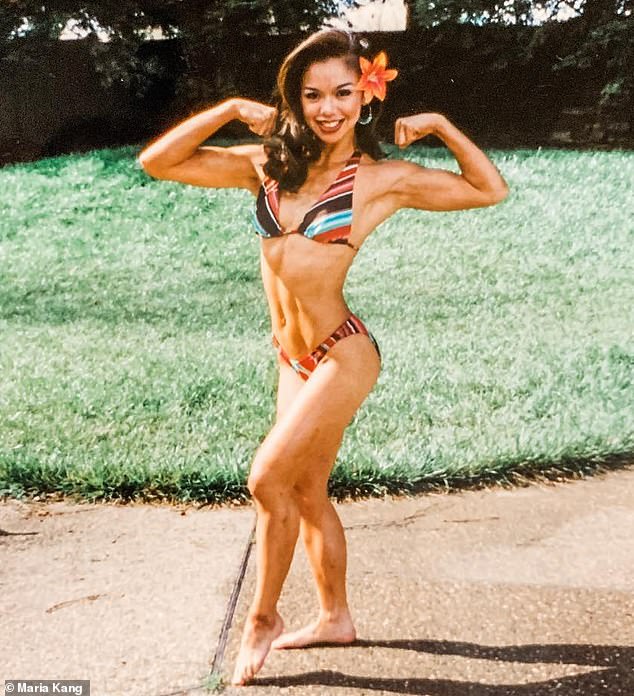 Throwback: Maria was an aspiring fitness model (pictured) and about to compete in a national competition when she decided to get breast implants. She went from an A cup to a full B cup 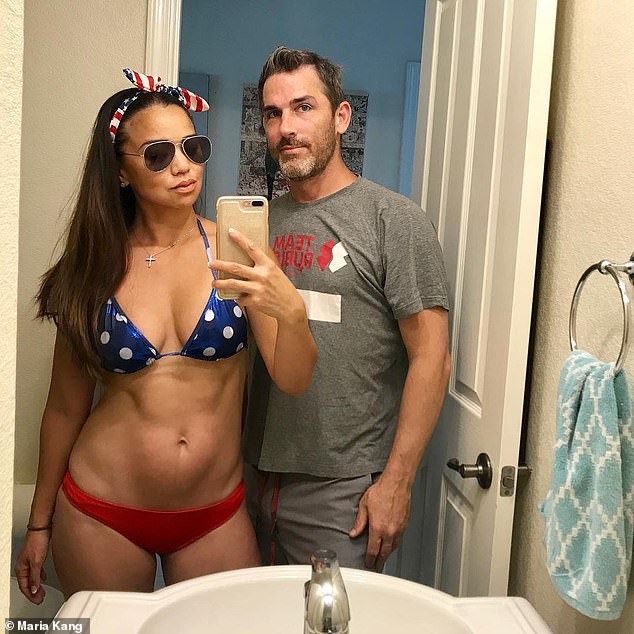 Honest: Although she suffered from physical and mental ailments because of the implants, she said she was too ‘vain’ and ‘insecure’ to have them removed. She’s pictured in July 2018 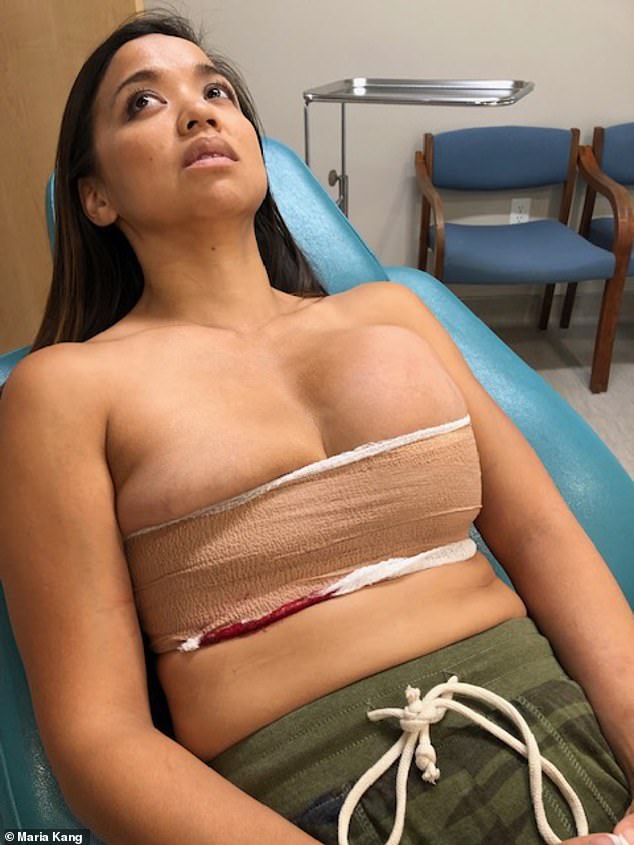 Complications: She suffered a painful hematoma after having explant surgery

‘I was stuck in the social media world, where fake physiques are rewarded, “liked,” and valued,’ she said. ‘I feared my husband’s opinion. I liked how I looked in clothes and swimsuits. I was vain. And I own that.’

Maria explained that it wasn’t until she started struggling with rapid heart palpitations, heavy chest pain, and chronic fatigue that she decided to have them taken out.

She believes her physical ailments were signs of breast implant illness, a term used to describe various systemic symptoms that are thought to be related to breast implants.

‘I’m sorry for my presence — for unconsciously normalizing an unnatural body standard, not expressing my challenges with body image and not being strong enough to unfix this years ago,’ she wrote at the end of her post. 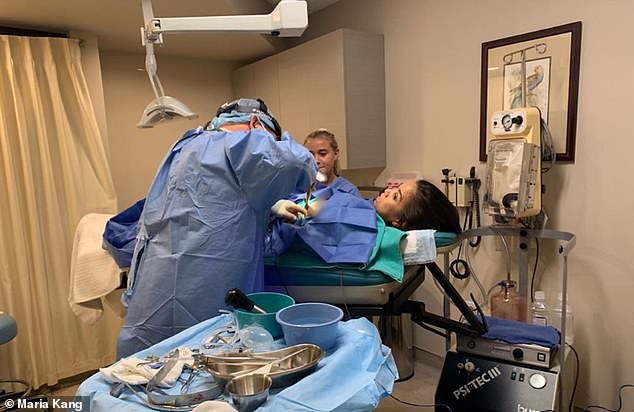 Scary moment: Maria had to have emergency surgery for internal bleeding, and she was awake the entire time 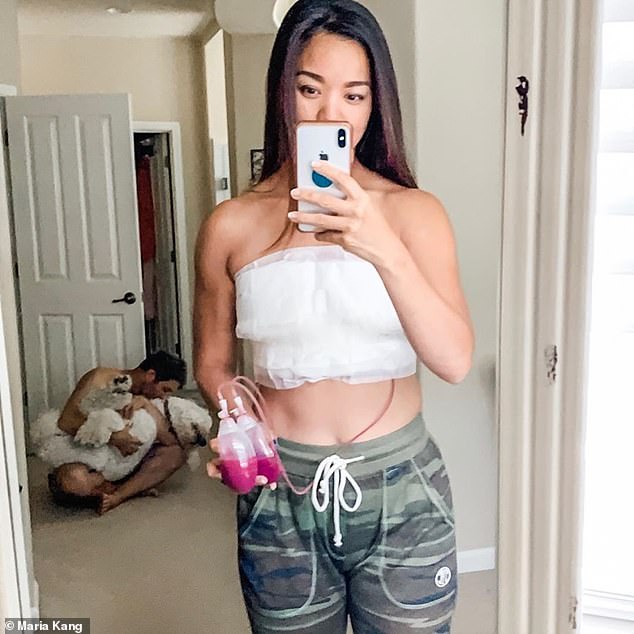 Final free: The fitness influencer (pictured after surgery) admitted that the breast implants she got in 2003 contributed to her eating disorders, body dysmorphia, and depression

‘I hope my vulnerability will encourage you to love your body and to value spirits that love their bodies too.

‘I hope you know that all the filters, body-altering apps, fillers, and fake body parts will not make you more beautiful than you are right now.⁣

‘You are beautiful. You are enough. You are valued. You are prized. You are “liked.”⁣ Thank you for being with me on MY journey knowing that yours may look different and still, that’s OK. We are OK.’

Maria had her implants removed a month ago and developed a hematoma after the explant procedure. She suffered from internal bleeding and had to have emergency surgery. 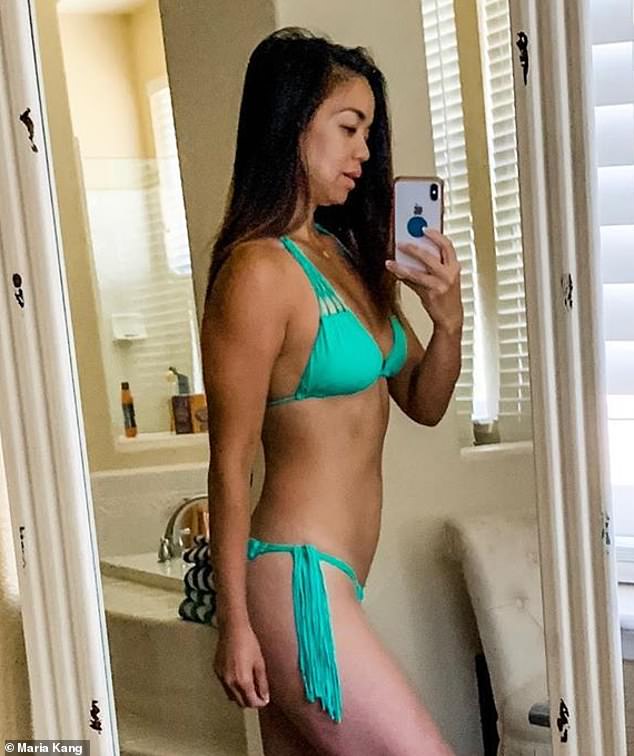 New look: ‘I didn’t get a lift or fat transfer. I just got my 225 cc saline implants taken out,’ she explained on Instagram 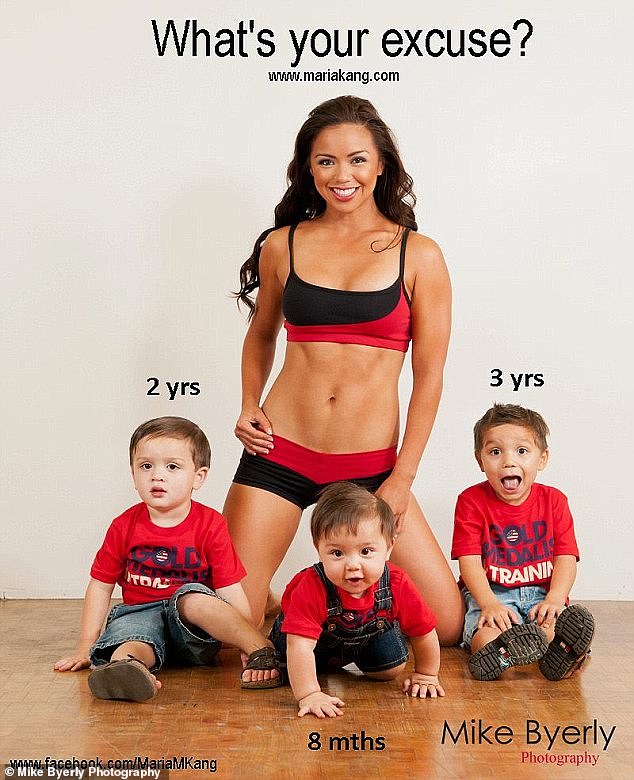 Fame: Maria went viral in 2013 when she shared a photo of herself showing off her toned figure while posing with her three sons, asking: ‘What’s Your Excuse?’

Neither the US Food and Drug Administration (FDA) nor the NHS acknowledge a single condition called breast implant illness.

They do, however, provide long lists of potential – and publicly known – side effects of having breast implants.

Implants are not designed to last a lifetime, the FDA says, and the longer a woman has the implants in her body the higher the risk of complications occurring.

Complications occur in around one per cent of all patients and can happen at any time after the surgery.

As well as changes to the appearance and feel of the breast some potential side effects include pain, infection, swelling or irritation, swollen lymph nodes, skin rashes or bruising.

‘I didn’t get a lift or fat transfer. I just got my 225cc saline implants taken out, alongside the capsule that formed around it and the scar tissue that needed to get scraped off my chest muscle and ribs,’ she explained in an Instagram post from July.

In a recent update shared earlier this week, Maria said she is already feeling better just weeks after having her implants removed.

‘I explanted one month ago and since then my fatigue immediately went away. My eyes don’t feel heavy. My inflammation has declined and most of all — I feel FREE. I feel ME,’ she wrote.

‘I feel like I’m finally leaving the young, insecure, and impressionable girl I once was and am coming into the strong and confident woman I am today.

‘When you know better, you do better.’