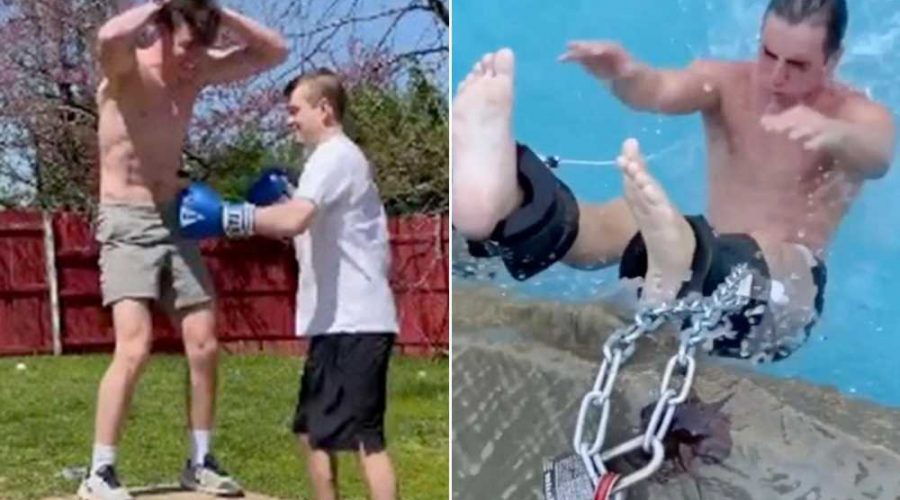 On the sauce: Why this gross spaghetti trick is making waves on Twitter

It’s like fruit-smashing comedian Gallagher is hitting the gym.

A New Jersey fitfluencer has devised an unconventional way to stay swoll — by having trainers hit him with watermelons, doing underwater situps and performing other unorthodox routines that would put “Rocky” to shame. A montage of his hardcore training regimen has amassed more than 2.6 million views on TikTok.

“My training process is different — it’s a bit unusual,” Cory Rosenthal, 20, told Jam Press of his extreme routine, which he reportedly dreamed up during the COVID-19 pandemic to prepare for a bear-crawl competition.

“You’re not going to see me squatting, curling, benching, because I get bored of doing those things,” the exercise junkie added. “I like to always be actively moving.”

Indeed, in one high-flying video, the Indiana University student can be seen back-flipping off a cable machine, performing a pushup and then doing a pullup in one fluid sequence. Another gravity-defying clip shows Rosenthal executing a squat while perched precariously atop a balance board — which is teetering on top of a foam roller.

“I also enjoy standing on a balance board just to loosen up my hips and always end my workouts by going into the sauna for 5 to 10 minutes,” said the fitness freak, who trains two hours a day, six days a week, the Daily Mail reported. He supposedly started working out at his father’s gym at age 16.

Another intense clip shows the intrepid gym shark doing situps while dangling from leg shackles upside-down in a pool, like a medieval torture victim. Each time Rosenthal relaxes from a crunch, his entire upper torso gets submerged.

And the gym rat redefines “hardcore” with a series of painful-looking ab workouts that involve a trainer hitting his stomach with everything from watermelons to baseball bats, as if he’s a human piñata.

“I love workouts that fire up my heart rate,” Rosenthal explained. “I go into them saying, ‘How I am going to shock my body today?’ “

The self-made muscleman added: “Am I going to flip off a car? Am I going to pistol-squat on a balance board?”

Needless to say, Rosenthal’s avant-garde workout sessions have made waves on TikTok.

“Bro is training to join the Avengers,” quipped one awestruck admirer of his superhero-esque feats

“Bro what you training for? The hunger games?” wrote another.

One aghast commenter also wondered, “Is there a war I don’t know about?”

The stunts may seem nail-biting; however, the daredevil has plenty of experts on hand to ensure he doesn’t get injured during his routines.

“For myself, I have worked with a ton of coaches; I had a backflip and calisthenics coach, a boxing coach, even a bear-crawling coach,” said Rosenthal, who often enlists people to spot him while he flips.

Ultimately, the young gym groupie hopes to “raise the bar” for what’s possible regarding workouts.

“To be the new era of fitness, I like to change the game and not do the normal,” he said.

Here’s hoping he steers clear of the infamous “Iron Crotch” exercise, in which Chinese martial artists batter their groin with a steel-capped log to increase their testicular fortitude.

12/05/2021 Lifestyle Comments Off on Fitfluencer stays ripped by getting hit with watermelons, baseball bats
Lifestyle