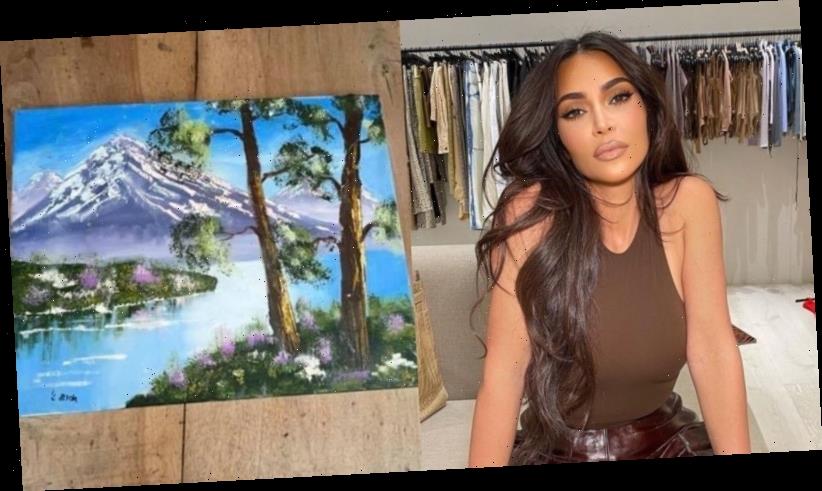 When is a painting not just a painting? If you’re Kim Kardashian West, you may have discovered the answer.

For those not following the latest Kardashian West painting-gate drama, a recap: On Wednesday, the mother of four posted a landscape oil painting to her Instagram stories, with the caption, “My little artist, North”. 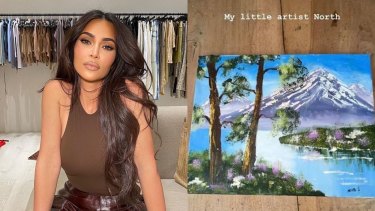 The picture, signed by her seven-year-old daughter, was sophisticated enough to provoke scepticism. Was a girl still in primary school capable of such a masterpiece?

“I will bet anything (even my life) that this painting was not done by North West,” tweeted one commenter.

“Kim Kardashian’s daughter did not paint this,” wrote another.

“It’s Kim K so you have to take everything she says with a heavy spoonful of salt.”

Kardashian West came roaring back via her Instagram stories, advising both the mainstream and social media to step away from her daughter while reiterating that yes, North really is blessed with a prodigy’s ability to paint and if you doubt this you are, to summarise, jealous.

“Don’t play with me when it comes to my children,” Kardashian West said, explaining that North, who turns eight in June, had been taking a “serious oil painting class”.

“North worked incredibly hard on her painting which took several weeks to complete.”

She continued, “as a proud mum, I wanted to share her work with everyone”.

Psychologist Debra Campbell says bragging about your kid’s achievements usually comes from a place of pride, and while that’s not a bad thing, it pays to read the room before you post.

“Bragging can be fun and positive when it’s amongst close friends and extended family you love, those who are emotionally connected and can easily share in your children’s successes,” Campbell says.

But this all depends on the relationship those online have, not just with the child, but the parent as well, Campbell says. “The wider circles of friends on socials may whole-heartedly join the congratulations, but in some cases, they might get caught up in social comparison, worried that their family isn’t up to scratch in some way.”

This is the “dark side” of social media, Campbell says: “The impact of social comparison on people’s self-esteem.”

North’s art teacher spoke out to verify the young painter’s integrity, but to be fair, if she did have help, it wouldn’t be the first time the Kardashians have tried to fool the public. Just last year, Forbes magazine launched their own investigation after crowning Kylie Jenner a billionaire in 2019 thanks to her make-up empire. According to Forbes, Jenner had been fudging the numbers.

Such tales reiterate the widespread dismissal of their success and suggestion they are merely “famous for being famous”. So what happens when one of them displays raw, unfettered talent for something other than provocative self-promotion? It might be disorienting.

And, though we find the behaviour of the Kardashians gauche and jarring at times, like when they jovially vacation during a pandemic, or edit their photos into blank, cartoonish versions of themselves, there is a core ideal perpetuated by every member, but none more so than matriarch, Kris: that behind every spat and every Instagram display of their surgically-enhanced bodies, is an authentic family.

This is the jewel in the crown of the Kardashian-Jenner industrial complex: low level wholesomeness, a “we’re-just-like-every-other-family” vibe, displayed via vacations, photos of babies and kids; genuinely loving moments on their show.

The backlash then, to a child’s painting might reflect the public’s own feelings of betrayal – we’re used to such conspiracies from the adults – but a child?

Perhaps the outcry of disbelief is also in part because North really isn’t like the rest of the kids in the US right now, huddled down in their houses, while a devastating pandemic rolls on. North is having proper art lessons.

Still. The kid has talent. Is it so wrong to want to brag about it? “The internet unfortunately isn’t a safe, happy playground,” says Campbell. “It’s a part of the job of parenting to be mindful of exposing any aspect of children’s lives publicly, lest the exposure puts them at risk emotionally or physically.”

It might be a little late for that. Huge chunks of North’s life are already visible in the public domain; she is already a highly lucrative product.

And the painting by North, arriving as it does during Kardashian West’s rumoured divorce from Kanye West, carries perhaps more significance than it normally would.

One wonders if part of her subconscious motivation behind showing the painting was to somehow manifest a high-functioning family unit, complete with child prodigy, despite rumours of separation from Kanye. Or, it could be just a proud mum. Blithely unaware of anything outside of her immediate surrounds.

Get a little more outta life

Start your week with practical tips and expert advice to help you make the most of your personal health, relationships, fitness and nutrition. Sign up to our Live Well newsletter sent every Monday.

12/02/2021 Lifestyle Comments Off on For Kardashian West, being a proud mum on Instagram is complicated
Lifestyle