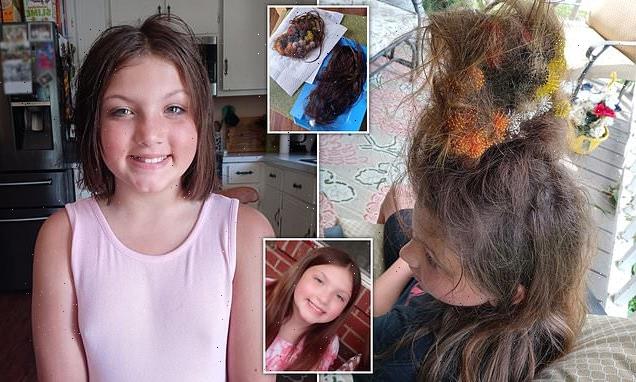 Girl, 11, is left ‘traumatized’ after getting FIFTY Bunchems tangled in her hair – which had to be chopped off

A little girl was ‘traumatized’ after getting more than fifty Bunchems toys tangled in her hair – forcing her ‘scared’ mother to chop her long locks off.

Cierra-Jane Darling, 34 from Kannapolis, North Carolina, said that her daughters Lileigh and Emma Strider were playing with the colourful balls when a mountain of them accidentally got stuck in 11-year-old Lileigh’s hair.

The youngsters were supposed to be in bed so, worried about angering their parents, they opted to wait until the morning to raise the alarm – getting the Bunchems even more ensnared.

Cierra-Jane desperately battled to prise the velcro-like toys from Lileigh’s frazzled hair, but only managed to untangle two in three and a half hours. 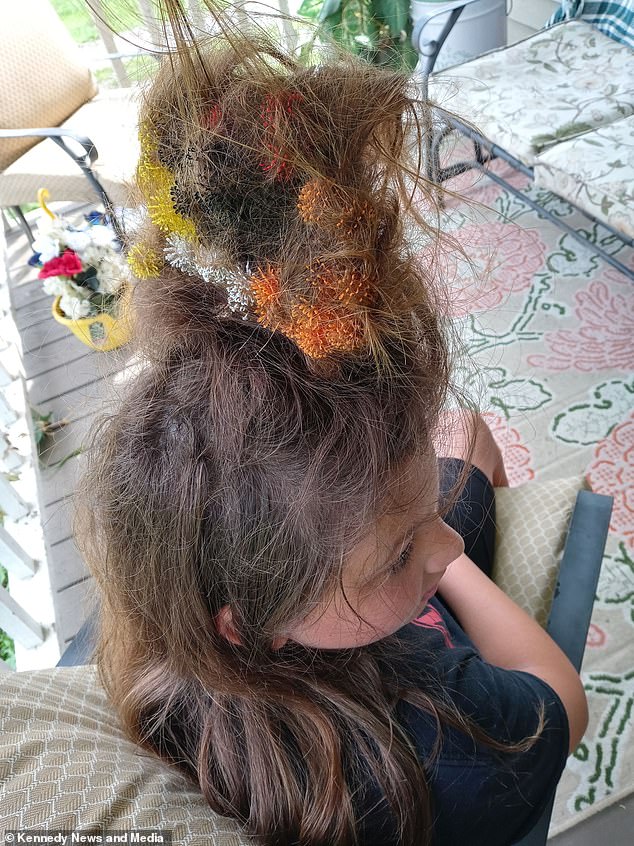 A mother desperately battled to prise the velcro-like toys from Lileigh’s frazzled hair, but only managed to untangle two in three and a half hours

The mother-of-three claims she was worried that husband Stacey Strider, 35, would be forced to shave off Lileigh’s long locks, but luckily managed to salvage some into a short bob.

However she was still forced to lop off more than 22 inches of hair that was too entangled in the Bunchems.

After a ‘traumatizing’ experience, the stay-at-home-mother is urging fellow parents to bin the toys – given that the risk of getting them stuck in any form of hair is simply ‘not worth the headache’.

This isn’t the first time the discontinued toy has caused issues- last year a child from Louisville got 150 Bunchems stuck in her hair – forcing her mother to spend 20 hours detangling them. 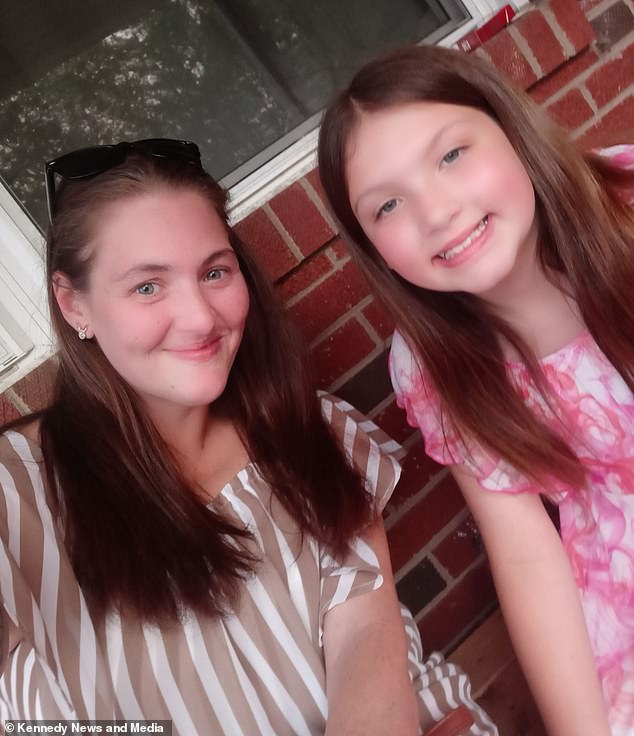 11-year-old Lileigh Strider (right) had long hair before the incident, which has left her with a short bob and 22 inches of hair lopped off 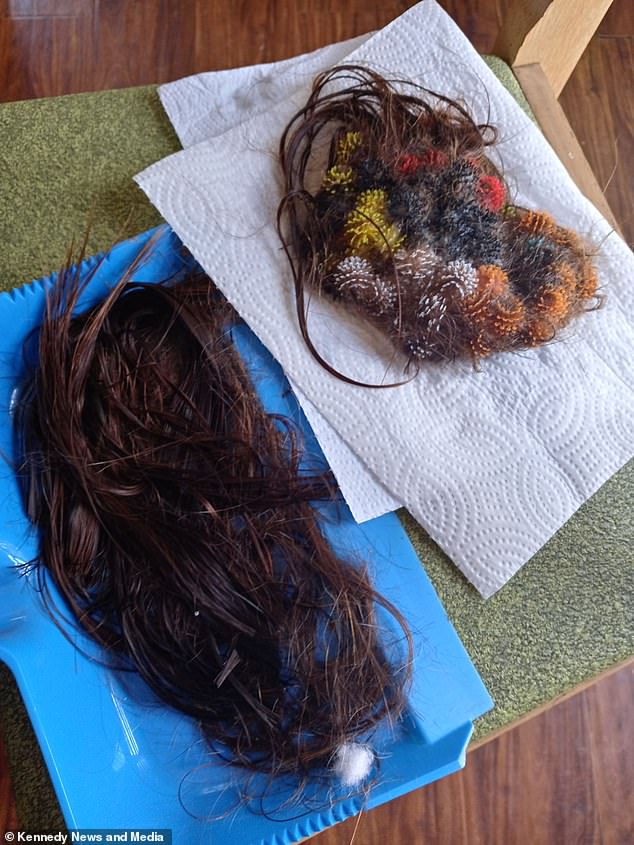 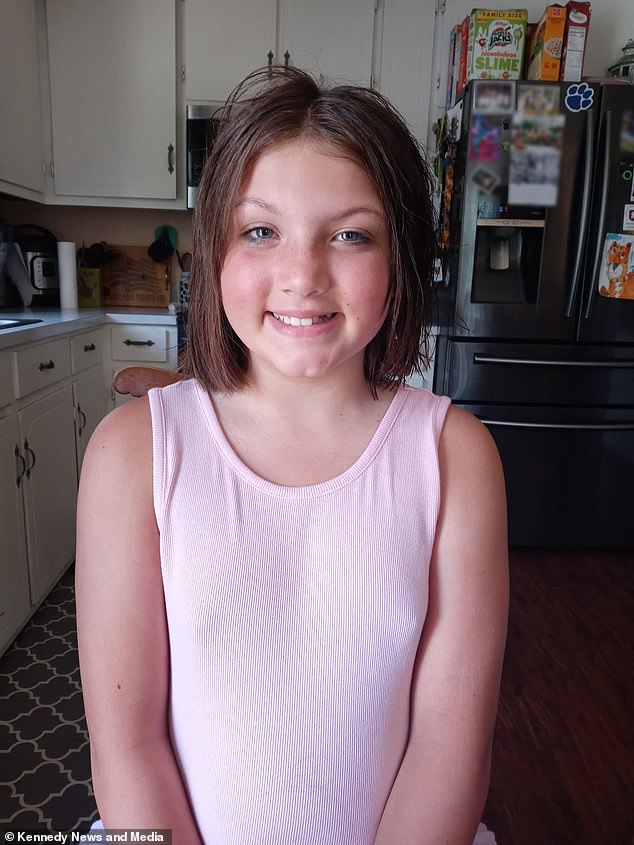 The bob cut Lileigh now has. Her mother said: ‘She’s a very girly girl and had to chop all of her hair off and she had been working so hard on growing it out’

The toy came under fire after several parents had to rush their children to the hairdresser, after finding it impossible to remove them at home.

A spokesperson for the toy manufacturer Spin Master, who launched Bunchems in 2015, said that they’re no longer in production and they encourage those that still have them in their homes to read the directions carefully.

Cierra-Jane, said: ‘There were at least 50 of them at the very minimum, but they were so tangled in her hair.

‘It was very traumatizing for my daughter, I will say that. She was also very upset because she loves her hair. 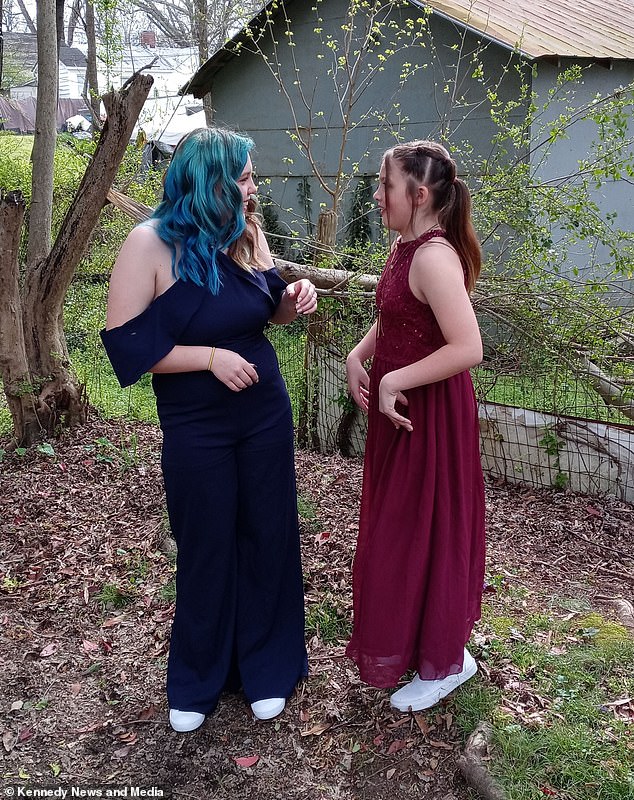 Lileigh with her older sister before her haircut. The 11-year-old was meant to be in bed, so waited until morning to tell her mother what had happened 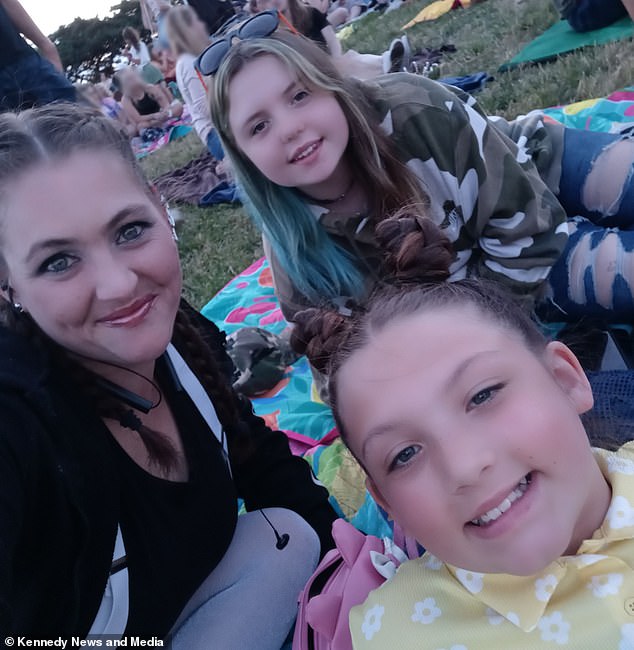 Lileigh with both of her sisters. She was playing with the Bunchems with sister Emma (pictured right) 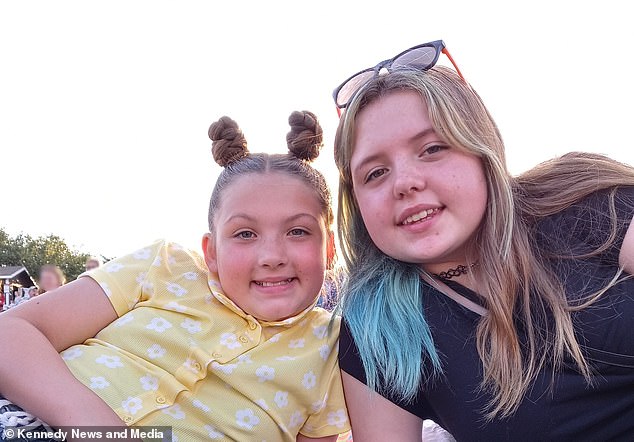 Lileigh and Emma, pictured before the Bunchems blunder. Their mother Ceirra has warned against the toys – and a spokesperson said they are now discontinued 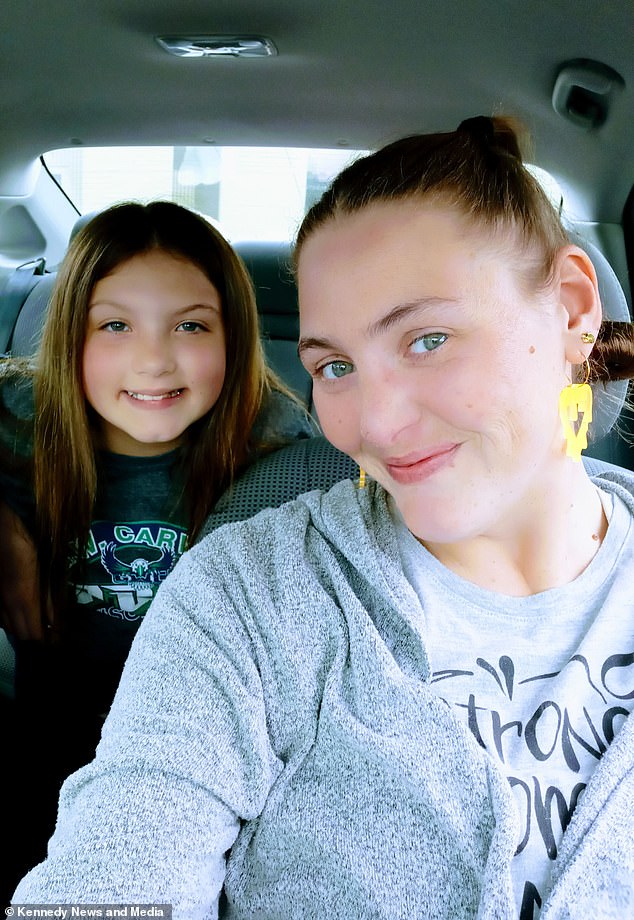 Lileigh with her mother, the youngster was said to be ‘traumatised’ after the toys got caught in her hair 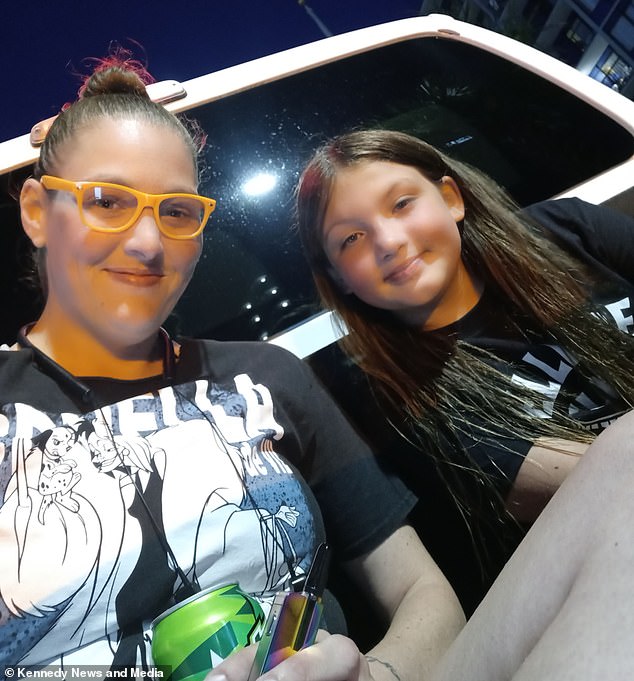 Cierra,34, said she was ‘scared’ when she couldn’t get the little plastic toys out of her daughter’s hair

Girly Lileigh pictured with her father and older sister, she spent a long time growing out her hair before it was lopped off

‘She’s a very girly girl and had to chop all of her hair off and she had been working so hard on growing it out.

‘I worried I’d have to shave her head. I called her dad at work and he said that if we didn’t have it figured out by the time he got home, then he would get the clippers out.

‘It was pretty scary for me, it was crazy.’

Cierra-Jane said that before the incident Lileigh’s brunette hair reached just above her behind and was at least 26 inches long.

But she was forced to cut it down to around three and a half inches. 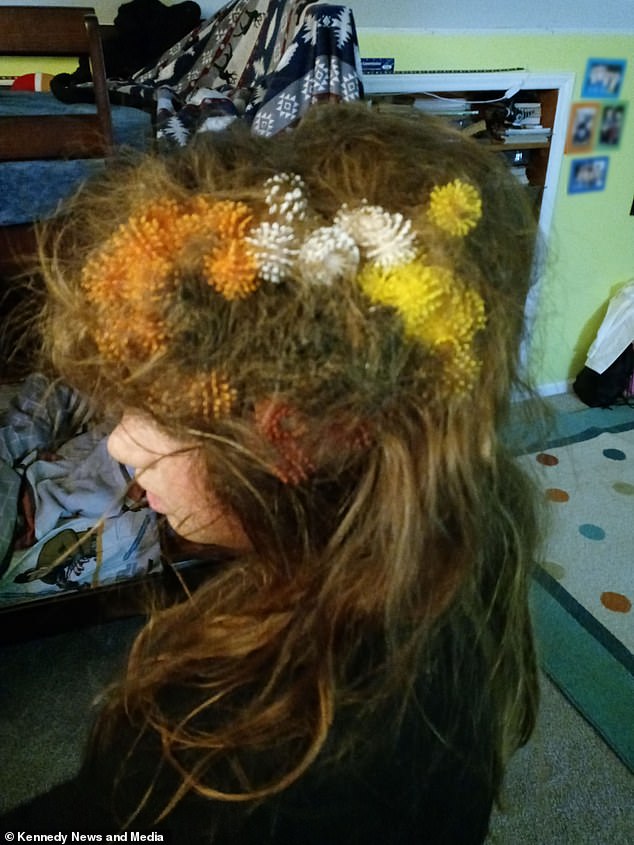 Around 50 Bunchems were tangled up in Lileigh’s 26-inch long hair, she didn’t want to wake her parents up to tell them and they became even more tangled overnight 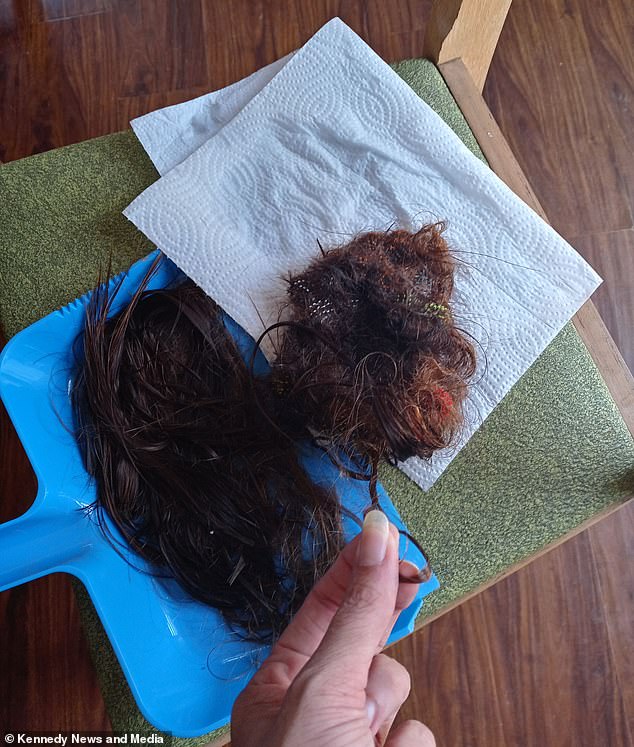 Hair ‘mare! The clump of hair, full of fifty Bunchems, had to be chopped right off in order to help the 11-year-old after she became distressed 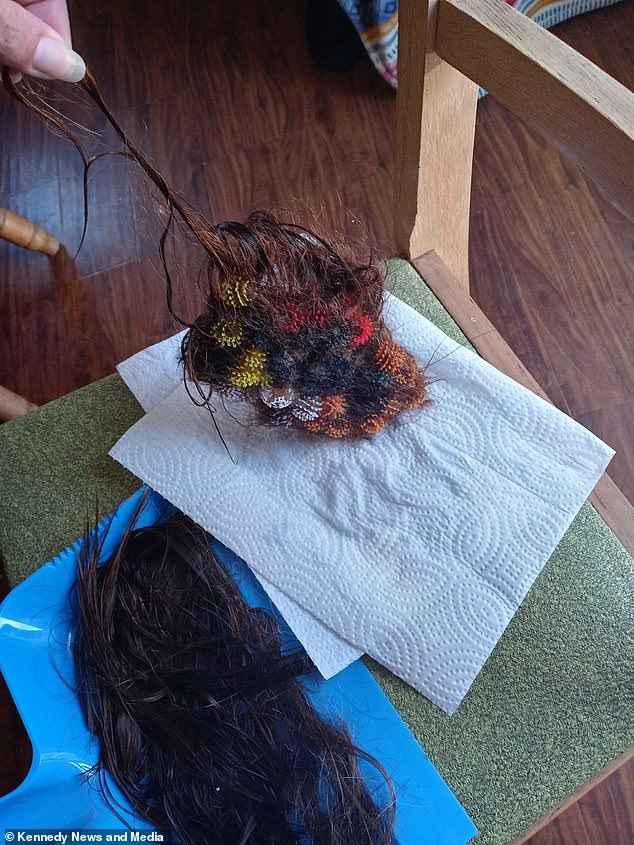 Cierra had no idea what Bunchems were, and they appeared in the home after her daughters were playing with them at a cousin’s 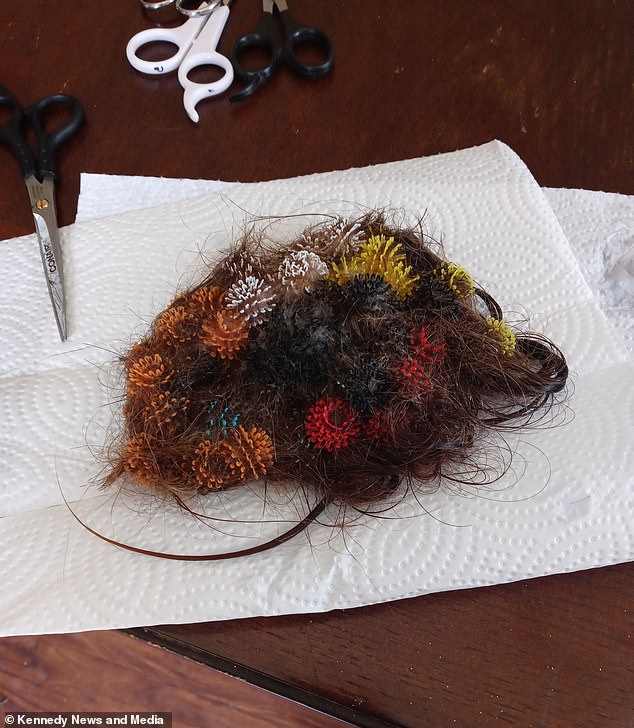 The Bunchems design means they stick together very easily when put together, causing the hair to tangle

Cierra-Jane said: ‘My two youngest daughters were playing with them and were just tossing them back and forth, and my eldest daughter threw them at my youngest, she turned her head and they got stuck in her hair.

‘And they also fell asleep while trying to take them out of her hair.

‘I had no idea what Buchems were. We were house sitting at my cousin’s while they were on vacation and they were my niece or nephew’s toys and the girls had found them.

‘I didn’t even know that they were playing with them or anything and then the next morning we got up and bang, it was just craziness.

‘It was terrible. We had to chop all of her hair off because there was just no getting them out.’

The Bunchems became lodged on the top right side of Lileigh’s head near the crown of her head. 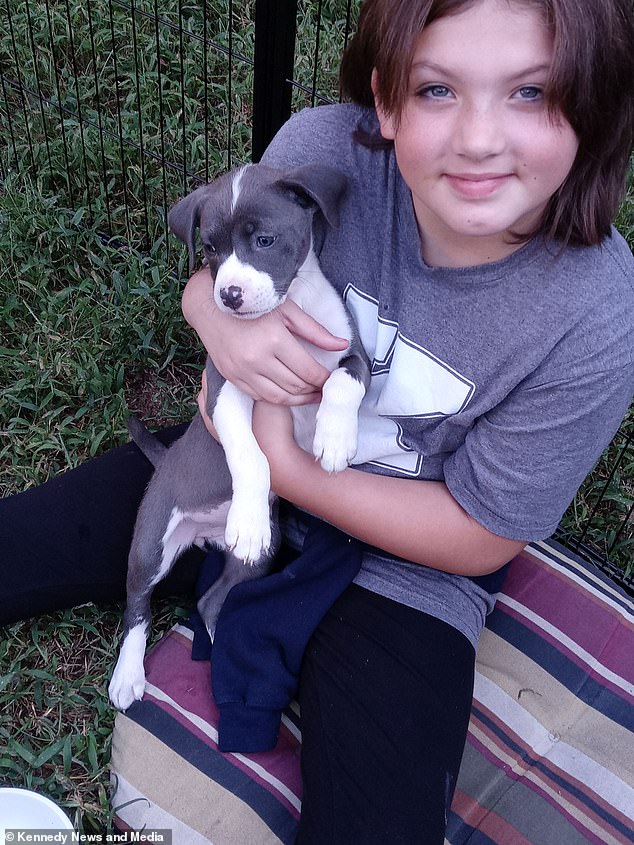 Lileigh now, with her new shorter style, her mother was worried she might miss Summer camp if she didn’t get the toys out of her hair 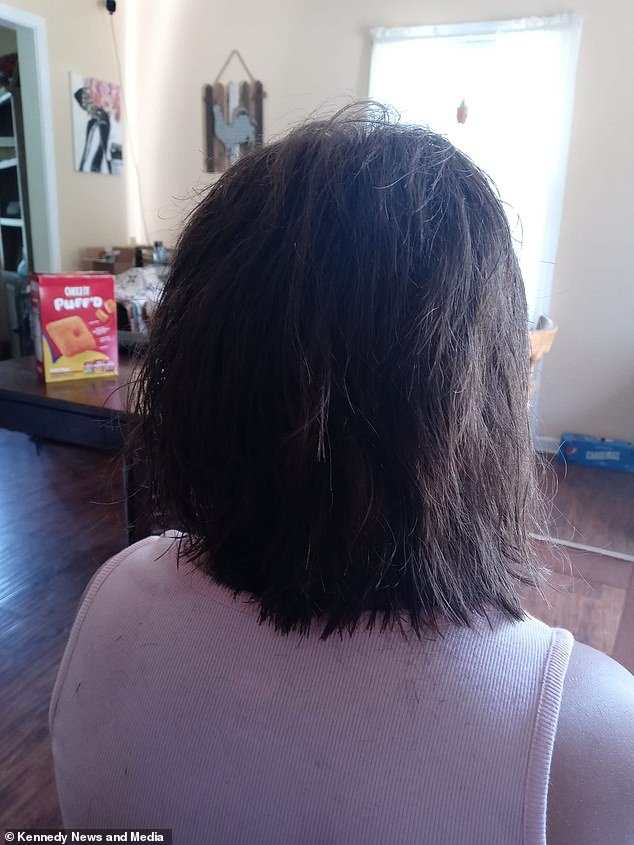 The mother said she used her hands, water, a rat tail comb and detangler to try and remove them.

Cierra-Jane said: ‘I called my best friend who’s a hair stylist and we tried for three and a half hours and only got two of them out of her hair.

‘The very next day my daughter was leaving for summer camp and was going to be gone for a week so all I was thinking was oh my gosh, if we don’t get these out she can’t go and we’ve already paid almost $1,000 and now she might miss it.

‘I was just thinking wow, we’re going to have to chop it all off and when I finally did she went from long hair down to the middle of her back close to her butt to her hair maybe being three inches long.

‘It was so tangled. Even after they were cut out there was no untangling it. I never would have got them out without cutting her hair.’ 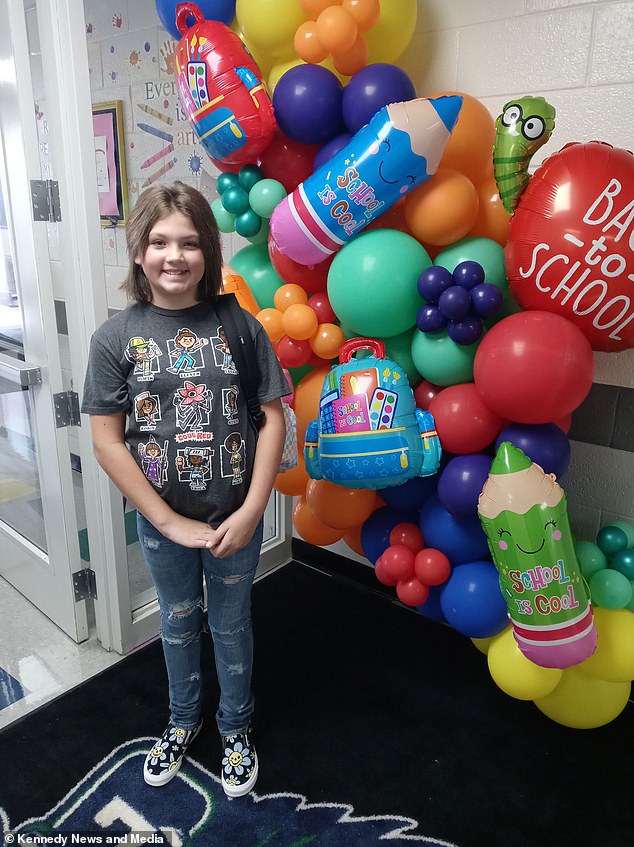 Lileigh now, with her new short hairstyle ready for school, Cierra said that parents who have Bunchems in their home should chuck them straight in the bin

After the whirlwind experience, the mother posted online to warn other parents to keep the tiny toys away from their children.

‘I’d tell other parents to just don’t buy them because in my personal opinion it’s not worth the headache.

‘Because if they get stuck in people’s hair like that, who’s to say if your cat or dog rolls on top of them that they won’t get stuck on them? I would not buy them.

‘Parents who have them should think about putting them in the bin.

‘And if you absolutely have to buy them, make sure that you as the parents put them up somewhere when the kids aren’t messing with them, and only let them have them under supervision.’

A spokesperson from Spin Master said: ‘Children’s product safety is paramount at Spin Master. All of our toys undergo rigorous testing for safety and product integrity.

‘We encourage any customers who have concerns with the product to contact our customer care team directly.

‘Bunchems are no longer in production.

‘For those parents who may still have the item in their home, we encourage them to read the directions carefully and leverage our online resources to help guide play with the product.’