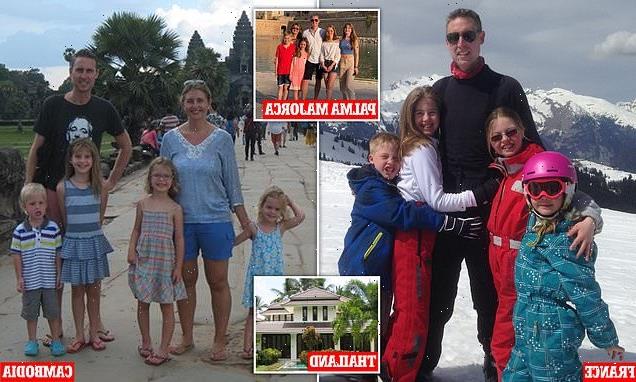 A couple reveal how they spent more than two years travelling with their four children without spending any money on accommodation by house swapping with homeowners from around the world.

Daniel Prince and his wife Clair, both 46, originally from Essex, came up with the idea while raising their family in Singapore and realising they weren’t enjoying the quality time together they wanted.

Believing there ‘had to be more to life’, Clair and Daniel sold their property and most of their belongings, and decided to swap a holiday home they had bought in Thailand.

Using a website, the couple were able to hand over the keys to their luxurious villa in exchange for stays in equally plush houses in the US, Canada, Australia and across Europe.

While home-schooling their four children, Kaitlyn, now 17, Sophia, 14, and twins Lauren and Samuel, 11, the family ticked off an incredible 80 properties across the globe before settling in France for a few years, including during the pandemic when travel was restricted. 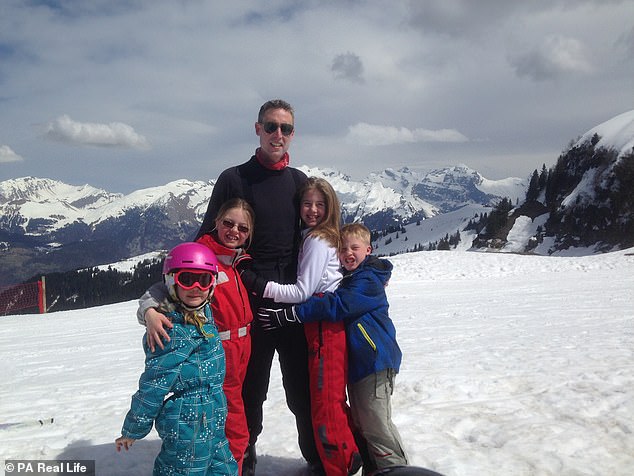 Daniel Prince with his four children enjoying the French Alps in 2018, four years after deciding a grueling desk job wasn’t worth it 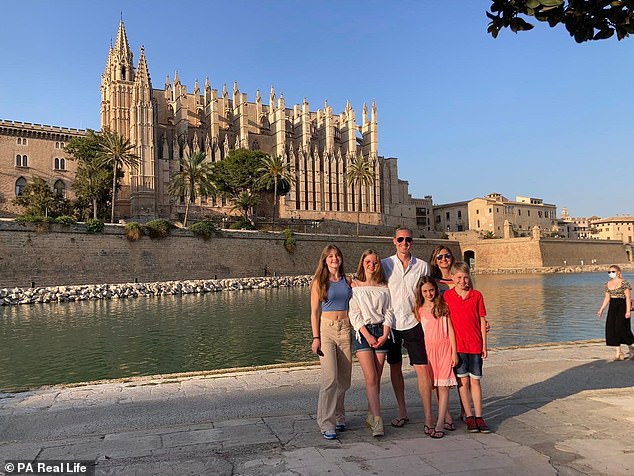 The Prince family soaking up the rays  in Palma Majorca in July last year, they travelled the world even though the pandemic 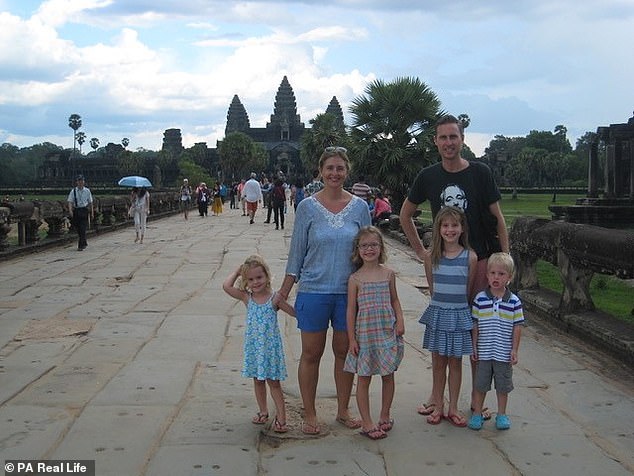 The first year of the trip, where the young family decided to travel around Asia, they are pictured here in Cambodia in 2014 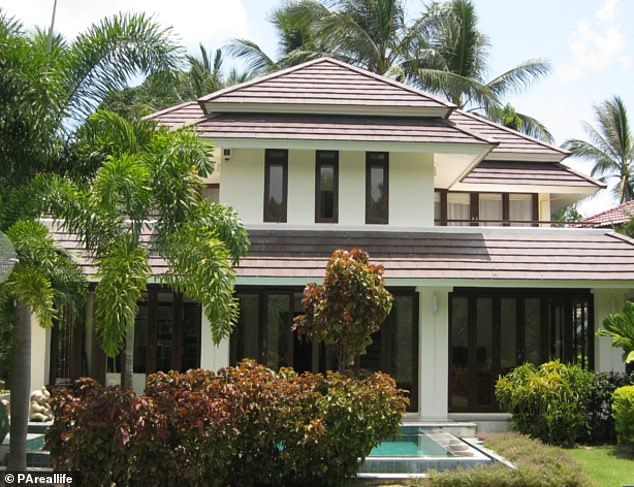 The Prince’s Thai holiday home, which they used to start house swapping with other travellers back in 2014 upon selling their home in Singapore and most of their belongings

Now raring to travel again through house-swapping, Clair said: ‘Eight years ago, we thought, “this can’t be what life is meant to be”.

‘Daniel was constantly working and I was here, there and everywhere, looking after four children.

‘We just thought, “life has to be more fun than this”. And we have done exactly that – we made life fun.

‘We could never have travelled the world like this with such a big family without house swapping, which has saved us so much money and allowed us to travel in a luxurious way without compromise.

‘It has been amazing – and it doesn’t need to stop yet.’ 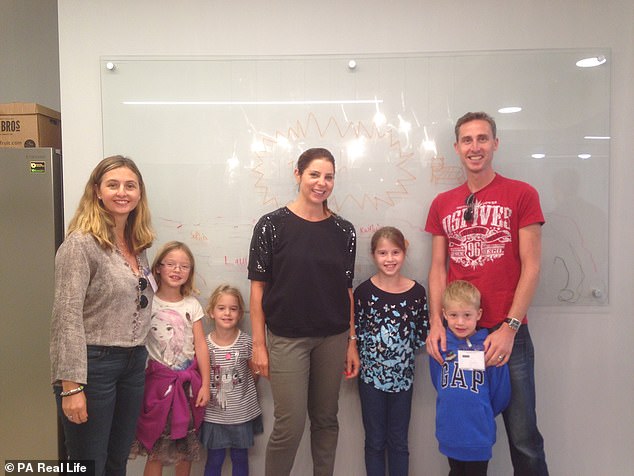 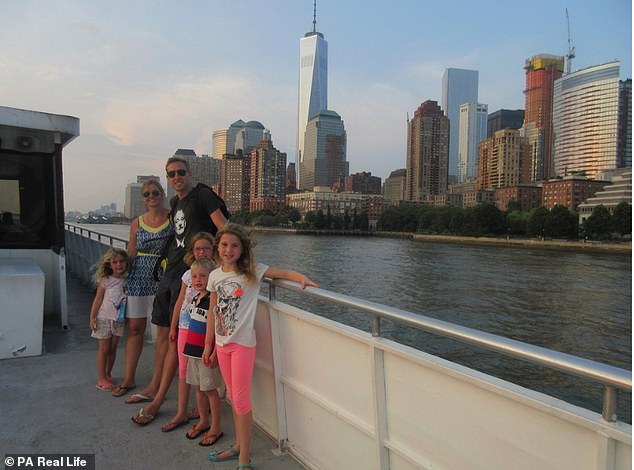 The Prince family on a boat in New York, enjoying the sights of the Big Apple on their adventure – which has seen them traverse 25 countries in eight years 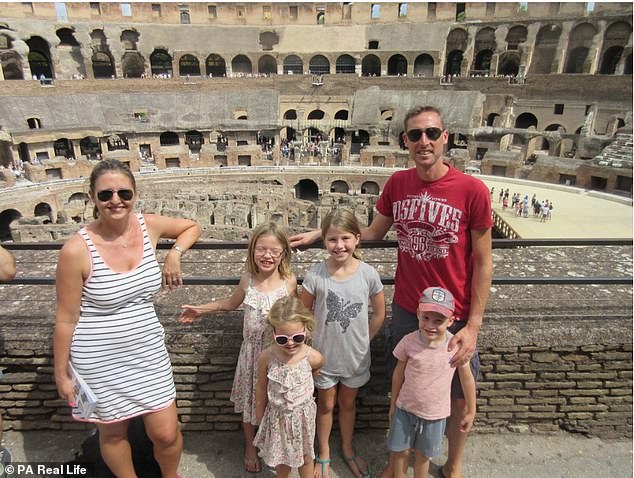 After the couple visited friends and family in the UK, they headed off for Europe. Pictured at the Colosseum in Rome 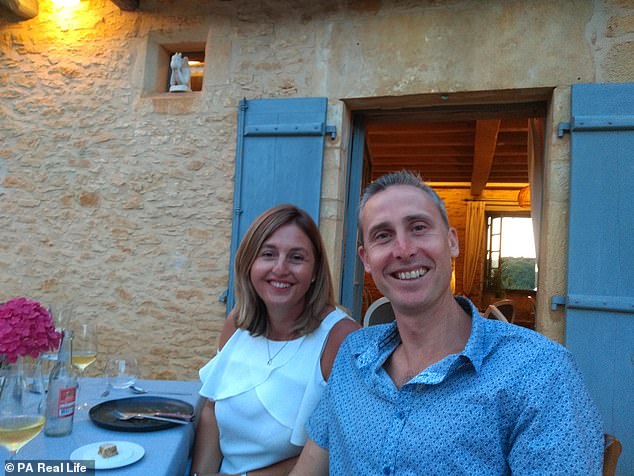 Dan and Clair in France during the pandemic, they had a countryside house in Dodogne, in the sunny South

Moving to Singapore in 1999 for Daniel’s work in foreign exchange, the couple enjoyed travelling around Asia, before settling down with the children.

But they found themselves stuck in a frustrating cycle, where childcare was expensive, leaving Clair little option but to stay at home with the children and her husband was absent most of the time in a demanding desk job.

Clair said: ‘The cost of childcare was so expensive that it was cheaper for me to look after the kids.

‘I was at home with the four kids, trying to keep up with the Joneses, while travelling here, there and everywhere for the kids’ ballet and music and school. 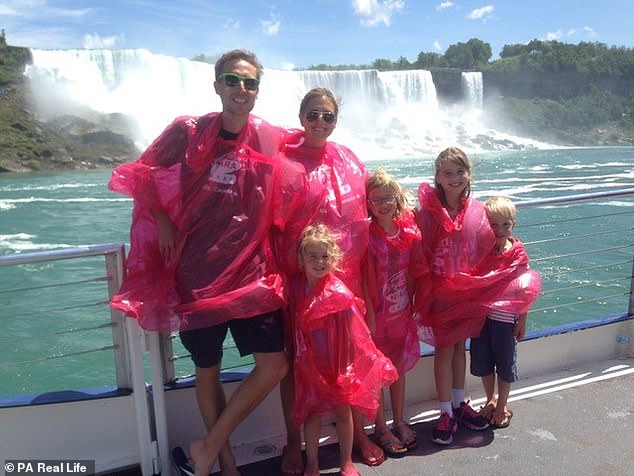 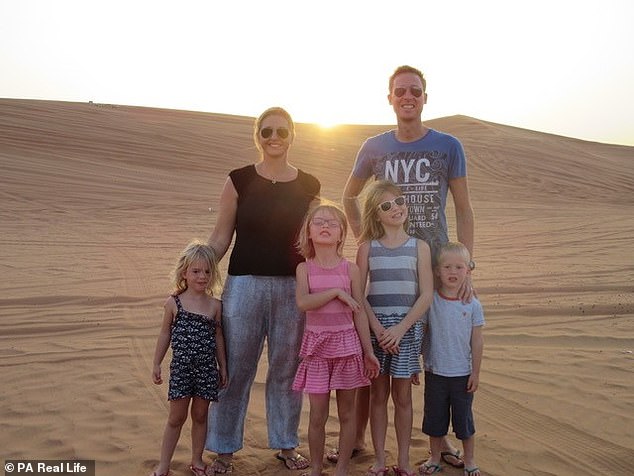 A desert safari in Dubai in 2014, the Prince’s say the house-swapping is the ‘best thing they’ve ever done’ 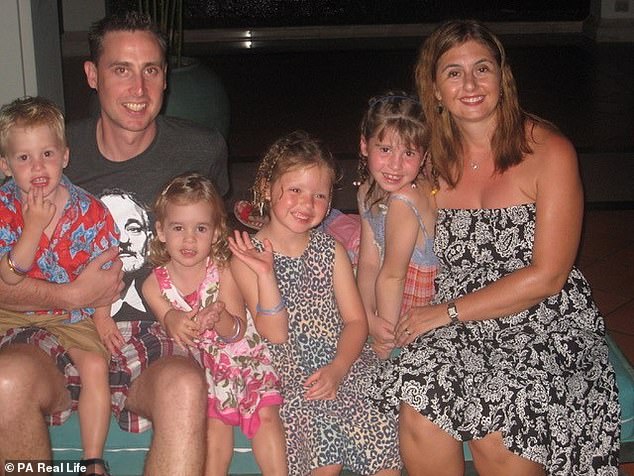 ‘Meanwhile, Daniel was working 24/7 to get food on the table but we would never see him.’

Holidays were also a rarity during that time because of the cost.

Clair said: ‘We would need two hotel rooms, which would be £150 a night, plus lunch and dinners every day, which could be £500 a day. It just wasn’t affordable.’

Desperate for a change, the couple began looking for a way out and stumbled on a website called lovehomeswap.com

Clair said: ‘It sounded amazing and we immediately thought, should we do this?’

For months, the couple agonised over the decision but decided to take the leap of faith in early 2014 and haven’t looked back since.

Selling their Singapore home and most of their belongings, left Clair and Daniel their holiday home in Thailand to swap with other travellers. 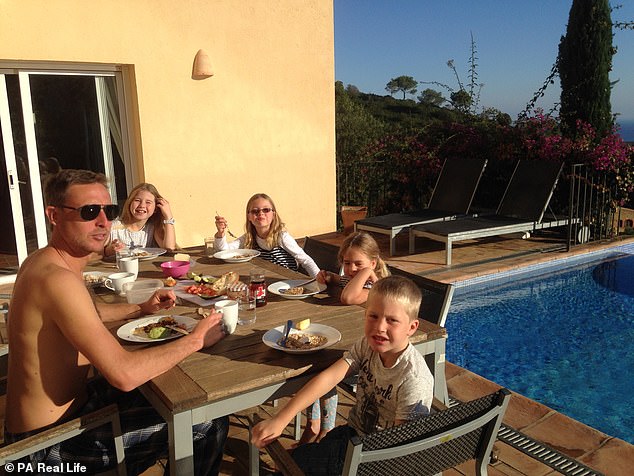 At a home swap in Sa Riera in Spain in 2016, the Prince family enjoys dinner by the pool in the Spanish sunset 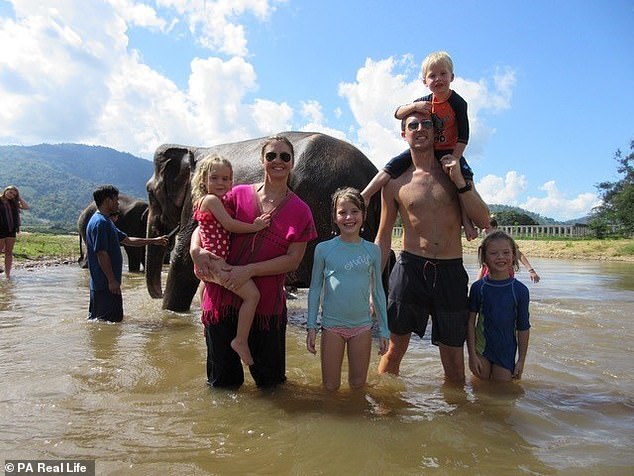 Heading to house swaps in the UK first, to visit family and friends, then travelled to Croatia, Dubai, Thailand and Cambodia before arriving in Australia for Christmas 2014.

Clair said: ‘We stopped in Sydney, Perth, Melbourne, and ended our year of travels in New Zealand for three months, which was incredible.

‘We couldn’t believe how amazing it was. We thought: “Why isn’t everyone doing this?”‘

With a steady income of around £1,000 a month they earned by renting out their Thailand home in between house swapping guests, while paying just £120 for their lovehomeswap.com annual membership, Daniel and Clair were able to live humbly.

‘When you swap your home, you pay for the electricity in your own home but the rental money we made would offset any bills we accrued,’ she said.

‘All of the homes were so peaceful and comfortable and we were able to live on a reasonable budget.

‘Some days we would have zero-dollar days, where we wouldn’t spend anything and go explore and take a picnic or find a free activity to do.’

And while they quickly settled into their exciting new life, Clair admitted it took some settling in.

‘It took a long time to realise this was our reality,’ she said.

‘With home-schooling we kept it very flexible, depending on where we were – so for example, when we were in Rome, it was a history lesson wherever we walked. Whereas in New Zealand, we had time to chill outside the house and sit and do schoolwork.’

After a stint in New Zealand, the family upped sticks again to home swap across the United States, starting in San Francisco before going into Seattle, Vancouver, New York and Virginia.

‘Of all the places, Croatia was probably our favourite place because it was stunningly beautiful and had such a lovely community feel among the village we stayed in,’ she said.

‘There were so many moments that blew our minds – like horse riding along the beach in New Zealand or sailing on a yacht out of the port of Marbella or having a picnic at Sydney Opera House on Christmas Eve.’

Heading back to Europe after two years of travelling, to visit the UK and Italy, Daniel and Clair then decided to slow down their travels.

‘We had been travelling for two and a half years which was incredible but we wanted our kids to learn another language and the best way to do that is to be completely immersed into it,’ she said.

‘So we house swapped around France until we were offered to rent one of the properties out and we ended up staying for the next two years.

‘We still did a bit of house-swapping for holidays while we were in France in 2018 – including a ski house swap in the French Alps. We borrowed clothes so we only had to hire the ski boots and ski passes.’

While the family only briefly settled, the pandemic elongated their stay by a few years, and Daniel began working as an online consultant, before starting a financial podcast co-hosted by daughter Lauren – Once Bitten! A Bitcoin Podcast.

Now with the borders open again, Daniel and Clair are itching to get back out travelling.

‘Daniel is now being invited to speak at conferences for his podcast so he is going to tie in house-swapping with work.

‘The difference it has made to the kids’ lives is amazing – they have such an incredible outlook on life and acceptance of different people regardless of wherever we are in the world.

‘For the twins especially, who were three when we started this, this is the life they have only ever known.

‘They are all so independent, adventurous and confident.

‘We’ve probably made it harder for us as parents in the future though, because they all have plans to live in different corners of the world.’

With plans to start home-swapping again, Daniel said: ‘It’s nearly ten years since we made the decision to go for it, and if we hadn’t, we would never have had the experiences we have had sat in an office or classroom.

‘There is no way we could have ever done what we have done without house swapping and I can’t wait to get going again.

‘There is a big world out there with plenty to explore and we would be crazy not to make the most of it while we can.’