The federal government has avoided a funding cliff for community organisations that help people dealing with family violence, isolation and drug problems with a multimillion dollar commitment to the sector.

More than half a billion dollars in annual funding set aside for the sector almost a decade ago was due to run out next year raising concerns about possible job losses, but the Department of Social Services and Attorney-General's Department said in the budget they would keep contributing the lion's share of their funding. 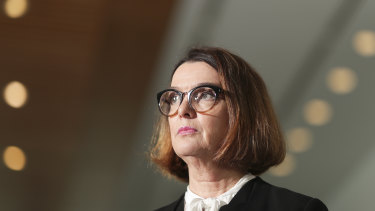 Minister for Families and Social Services Anne Ruston says the government has guaranteed funding to the social sector.Credit:Alex Ellinghausen

The Australian Council of Social Services and the Australian Services Union welcomed the government's plan but said they were worried money channelled through other government departments and the states had not been guaranteed.

"The government is securing the pay of thousands of social workers, disability advocates, financial counsellors and others employed by charities and community organisations which run programs for the Department of Social Services," Senator Ruston said.

Workers in the sector won pay rises of as much as 41 per cent in 2012 after the national pay tribunal decided they had been historically underpaid because most workers were women.

The then-Labor government set aside money to cover the higher cost of those wages for social organisations that depend on Commonwealth grants for their funding. That money was due to run out next year, which sparked fears from social services organisations they may have had to make deep cuts to jobs, services, or workers' hours.

The Australian Services Union, which represents workers in the sector, said there was uncertainty surrounding money the federal government channeled through partnerships with the states for services like homelessness and housing.

"On face value an actual funding cut is being proposed rather than the funding increase that is needed," said Natalie Lang, the union's New South Wales branch secretary.