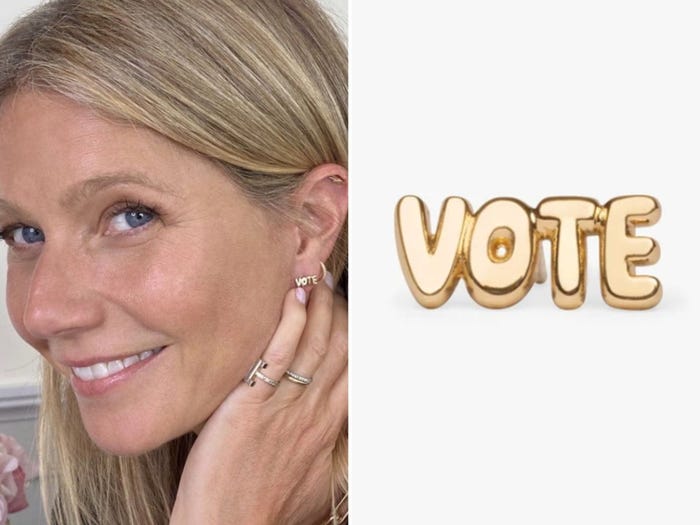 Gwyneth Paltrow is the latest celebrity to encourage voting while simultaneously making a fashion statement.

The actress was pictured wearing a pair of gold stud earrings that spell out the word "vote" in an Instagram picture shared Thursday by the maker of the jewels, Studs — a New York City ear-piercing boutique that also sells baubles on its website.

"@gwynethpaltrow is ready to rock the Vote (Stud)🤘Are you?" Studs' caption read.

@gwynethpaltrow is ready to rock the Vote (Stud)🤘Are you?  20% of our Vote collection goes towards @whenweallvote and we’re giving an extra $1 for every email sign up for our voters guide. Not registered yet? Head to studs.com/vote to shop the collection and get prepared to vote. #whenweallvote #realstudsvote

Paltrow was wearing the brand's Vote Studs, which cost $70 for the pair and $35 for a single earring at the time of writing.

The design sold out within 48 hours of its release, according to the Studs website, but the style is now available for pre-order and is set to be restocked and delivered the week of October 12.

The earring brand's website says that 20% of the purchase price of the limited-edition Vote collection products will be donated to When We All Vote, a nonprofit, nonpartisan organization dedicated to increasing participation in US elections.

The brand sells four other earrings as part of the collection, including two peace sign styles, and two minimalist huggie designs that are available in gold and silver.

In addition to Studs' collection, other fashion and accessory brands have released "vote"-centric styles ahead of the 2020 presidential election.

In August, Michelle Obama nearly broke the internet after wearing a "vote" charm necklace during the live-streamed Democratic National Convention. The necklace, designed by Chari Cuthbert of ByChari, retails for between $295 and $1,260, and the brand had its best day of sales the day after Obama wore the accessory.

Jill Biden also recently sported a pair of Stuart Weitzman knee-high boots with the word "vote" printed across the calf. Proceeds from the $695 shoes benefit the nonprofit I am a Voter.

Representatives for Studs did not immediately respond to Insider's request for comment.