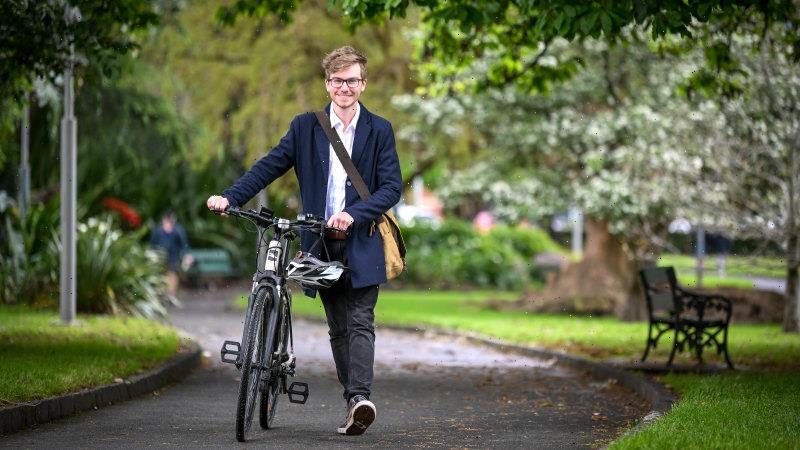 When Nick Savage decided he wanted an electric bike, the Greens candidate for the state seat of Hawthorn priced them and realised they could be expensive.

So the 25-year-old did something logical: he sold his car, used the money to buy an electric bike kit and converted his five-year-old Giant bike.

“It works very well, and it’s perfectly road legal,” said the tutor and former bartender, who quit his job serving drinks at a Docklands bar to run for parliament. The bike, he said, “is great for this area as there are quite a few hills”.

Savage, who lives in Camberwell, has this week begun letter-boxing and knocking on doors in this hilly, leafy electorate where, 26 years ago, the first Greens member to stand in the seat attracted just 8 per cent of the vote.

The electorate is one of Australia’s wealthiest areas – the median weekly household income in Hawthorn is $2313 compared to the state average is $1759 – and its Greens vote grew to about 20 per cent over the past two state elections.

But at May’s federal election something happened in this area to send a chill down the spine of Greens members: in the federal seat of Kooyong (which the entire seat of Hawthorn sits within), their vote collapsed.

People wanting to cast a vote on climate change concerns appeared to transfer their allegiance en masse to teal candidate Monique Ryan. The Greens at the 2019 federal election polled 21 per cent of the primary vote; in May they polled just 6 per cent.

The Age is covering the state seat of Hawthorn in detail until election day, and one of the key questions is whether the teal success that swept the nation in May will repeat at state level. The independent candidate for Hawthorn, Melissa Lowe, hopes it will.

The Greens’ Savage isn’t sure it matters if Lowe takes some votes on environmental issues that would typically go to his party.

“We’re running against the teals, but we do want the same thing: we both want action on climate change,” he said.

Climate change will be front and centre in the seat on Wednesday night when community group Lighter Footprints stages one of its regular candidate forums at the Hawthorn Arts Centre (formerly the Hawthorn town hall).

Lighter Footprints have run candidate forums in the area for more than a decade. Their most recent event in April took on national prominence when, having attended their previous forums, the then federal treasurer Josh Frydenberg declined to appear alongside Ryan and candidates from Labor and the Greens.

The group’s Lynn Frankes said the forums were held so community members could hear first-hand where the candidates stood on climate action.

She said key issues for Hawthorn residents included climate targets, forest policy and clean energy. “Elections can be full of spin and misinformation. Instead of faceless names on a ballot paper, community members will be able to assess the candidates responding in real-time to difficult questions,” she said.

The four main candidates for Hawthorn – Labor’s incumbent MP John Kennedy, Lowe, Liberal John Pesutto and Savage – will be at the forum. There is space for about 500 people and by Tuesday more than 300 people had sent an RSVP. To register to attend, visit the Lighter Footprints website.

Savage recently graduated from Monash University with a masters in public policy, focused on environment and sustainability. He said the three election issues that came up when talking to Hawthorn residents were climate change, integrity and the cost of living. ”People often mention cycling infrastructure too,” he said. “It’s scary riding around on bike lanes in this area.”

Last month the Greens released a “Big Bike Build” policy that would result in $2.5 billion committed over the next four years to building hundreds of kilometres of separated bike lanes, creating more safe pedestrian crossings and improving footpaths.

Savage said the Andrews government’s electric vehicles tax was “ridiculous” and there was a lot of interest in electric cars in the seat.

Savage disagrees. “Electric vehicles should be subsidised, not taxed.”

This story is part of our in-depth local coverage of the key seats of Hawthorn, Melton and Richmond at the November state election.