Opposition MPs accused the state government of running a protection racket for Professor Sutton during a hearing on Friday, which was attended by the Deputy Chief Health Officer in his absence.

Mr Hunt and acting Premier James Merlino both called the criticism of Professor Sutton unfair because he travelled to Canberra to attend a meetings of the National Health and Medical Research Council and the organisation’s annual dinner. 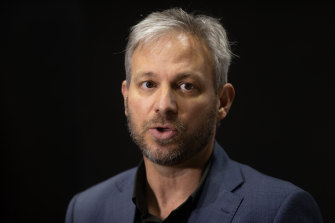 The chief health officer of every state and territory was invited to the nation’s capital from Wednesday. NSW Chief Health Officer Kerry Chant attended virtually so she could remain in Sydney to deal with a growing outbreak in Sydney. Her Western Australia and Northern Territory counterparts also stayed at home.

With Professor Sutton on leave on Friday after the two days of meetings, Deputy Chief Health Officer Allen Cheng filled in as the Health Department answered questions at Victorian Parliament’s public accounts and estimates committee.

Professor Sutton’s absence triggered immediate vitriol in the hearings: Liberal MP Richard Riordan’s first question to Health Minister Martin Foley was whether it was his decision for the Chief Health Officer not to attend the hearings. 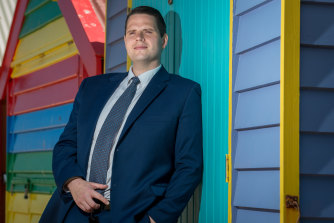 Amid further questions on whether it was a good look for the Chief Health Officer to be “wining and dining” at a dinner on Wednesday when a 25-kilometre movement limit was still in place in Melbourne, Health Department secretary Euan Wallace clarified that Professor Sutton went to Canberra in a working capacity and therefore it was appropriate to travel.

“He was at work in Canberra on behalf of our state,” Professor Wallace told the committee.

“I think that story was deeply unfair; this was a meeting of the National Health and Medical Research Council, he plays an important role,” the federal Health Minister said.

Mr Merlino agreed that it was a “work-related event”.

“I think it was appropriate.”

Separately, Professor Cheng revealed in Friday’s hearings that coronavirus cases in Victoria were growing at a rate of 10 to 30 per cent per week before the statewide lockdown started on May 27.

“1.3 would mean we expect 30 per cent more cases after six or seven days, so that is still a growing epidemic,” the acting Chief Health Officer said.

“What we really need is to get it below one. And I think for example at one point last year it was 0.9 or so. That is still a very slow rate of decline.”

Professor Cheng said a sharp intervention such as a lockdown was therefore necessary.

“Otherwise you’d be extending it for a long period of time. But 1.3 is clearly too high and it does mean an epidemic that is continuing to spread.”

He estimated that by the end of Melbourne’s two-week lockdown last Thursday, the Reff rate was 0.7.

18/06/2021 Lifestyle Comments Off on ‘He was at work’: Hunt, Merlino defend Sutton over trip to Canberra despite 25km limit
Lifestyle