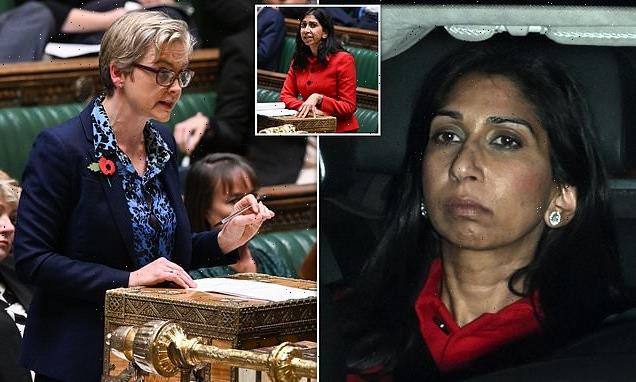 Coo-ee! A dainty wave to the Press Gallery… then she came out swinging: HENRY DEEDES watches Suella Braverman facing down her critics

Nothing gets opposition MPs’ nostrils flapping quite like the whiff of wounded minister in the air.

So naturally Suella Braverman’s arrival in the Commons late yesterday afternoon had them all baring their teeth – a school of sharks circling in freshly chummed water.

The Home Secretary had come to make a statement on the Manston migrant processing centre in Kent, where conditions are said to have deteriorated dramatically on her watch.

What with all that boring hoo-haa about using her private email to send official documents which forced her resignation first time round, Labour hopes were raised for getting her booted out again by the end of the week.

As a steely-eyed Suella took her seat, the atmosphere tingled. Sat glaring at her over the Despatch Box opposite were the unlovely trio of Yvette Cooper, Emily Thornberry and the Shadow Leader of the House, Thangam Debbonaire. 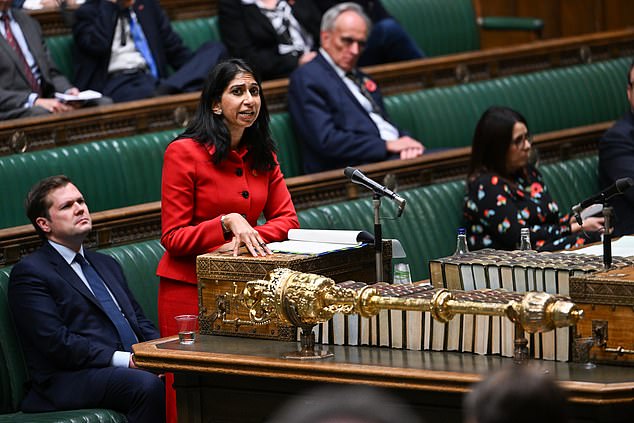 HENRY DEEDES: Nothing gets opposition MPs’ nostrils flapping quite like the whiff of wounded minister in the air

Mrs Braverman, though, is not someone who is easily pushed around the playground. If anything, she appears to derive strength from her critics.

When metropolitan snoots such as Thornberry and Cooper start getting all hoity-toity with her she takes it as confirmation that she is upsetting exactly the right people.

As she took her place at the Despatch Box she greeted her audience with a nonchalant sang-froid.

A smile here, a casual toss of the fringe there. She even had the brass neck to look up at the Press Gallery and give an unfriendly Guardian journalist a dainty little wave. Coo-ee!

And then she came out swinging.

She denounced the whole immigration system as a mess. Broken. ‘We need to be straight with the public. Illegal migration is out of control,’ she informed the House. 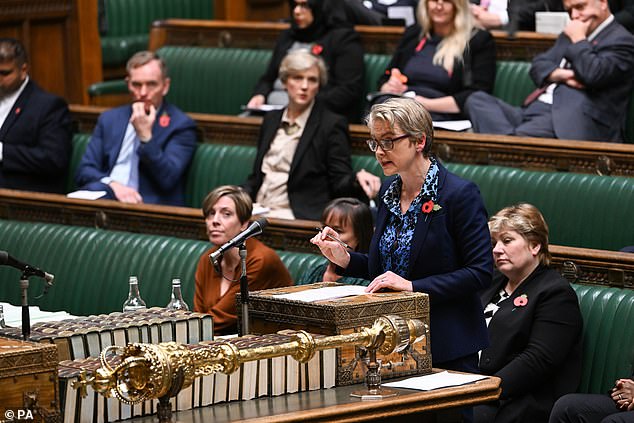 Enter Yvette, little coils of steam already emanating from her ears. While waiting her turn, Miss Cooper had been so eager to get stuck into her opposite number she managed to dribble water all down her front

Some 40,000 immigrants had already arrived this year and Government was spending the £6.8million a day on hotels for them. There was an ongoing ‘invasion on our southern coast’. Cripes.

Suella denied claims that she had ignored legal advice about sending migrants to hotels and accused Labour and the other opposition parties of playing ‘political parlour games’. It was all part of a witch-hunt.

They were simply trying to get rid of her because she, Suella, is the only one with the guts to try to get a grip on the problem.

‘Let them try!’ she cried with Boudicca-like defiance.

Enter Yvette, little coils of steam already emanating from her ears. While waiting her turn, Miss Cooper had been so eager to get stuck into her opposite number she managed to dribble water all down her front. Oops.

The Home Secretary was ‘failing,’ she announced, that ear-grinding voice chewier than boiled scrag end.

‘Failing to provide proper accommodation… failing and letting everyone down…’

She then launched into the Government’s proposed Rwanda scheme which she demanded be dropped along with the other ‘gimmick policies’.

Yet once again she offered no solution to halting the thousands of illegal and dangerous crossings of the Channel made by boats each week. 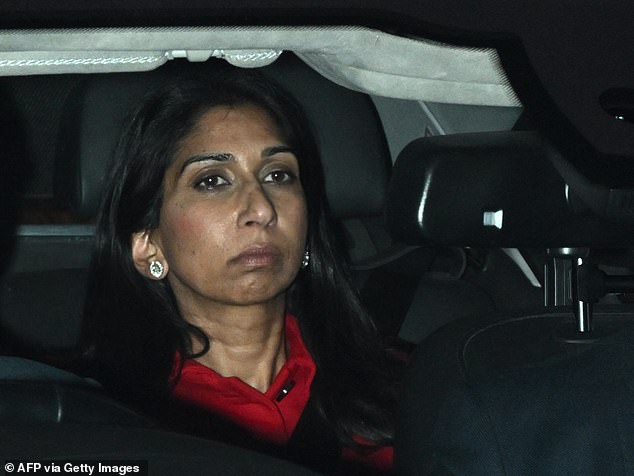 Mrs Braverman, though, is not someone who is easily pushed around the playground (Pictured on her way to the Commons to make a statement on October 31)

Indeed, her only suggestion was for the Government to engage in greater co-operation with France. What, like send them another 45million spondoolicks?

Some Tory MPs were not wholly supportive. William Wragg (Con, Hazel Grove) spent most of the session smirking at her words dismissively.

Sir Roger Gale, in whose North Thanet constituency Manston lies, was full of praise for the centre, saying it ‘operated wonderfully’ before Braverman took office. Do Sir Roger’s constituents share his enthusiasm for it, I wonder?

Most of the other claret-nosed grandees, though, were right behind her in getting tough on migrants. Sir Edward Leigh (Con, Gainsborough) belongs firmly in the ‘send ’em back’ camp.

‘If they don’t want to be in Manston, they can stay in France,’ he chuntered.

Sir John Redwood (Con, Wokingham) announced that Mrs Braverman had ‘spoken for the nation’. It’s rather sweet when Sir John speaks up for Suella.

Despite his rather limited emotional repertoire, he tends to go all gooey. Such affection he previously only reserved for Margaret Thatcher.

The Prime Minister might have found Suella’s ‘I’m telling it like it is’ approach a bit, well, trenchant, at times yesterday, but many voters will undoubtedly share Redwood’s admiration for her.