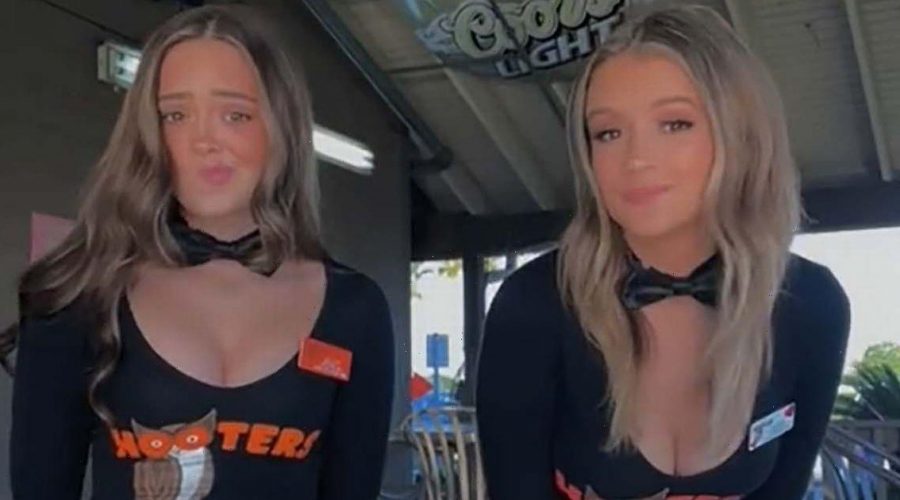 A pair of Hooters waitresses have hit back at trolls with a savage reply after they were branded “wh***s.”

But despite its popularity among men – Alley has revealed that she receives some nasty messages for just doing her job.

The employee and her fellow scantily clad co-worker have taken to TikTok to hit back at those dishing out cruel remarks with a rather sassy response.

Donning a black version of the usual orange Hooters branded get-up, the brunette and her blonde colleague can at first be seen posing for the camera.

Alley revealed with on-screen text that trolls said: “Y’all are wh***s for working at hooters.”

However, the vicious comment about their choice of career has not got to the couple of bombshells. Defying the haters, the pair brutally snapped back and pointed out: “Don’t be mad when it’s YOUR dad paying our bills.”

In the clip, the two women held hands as Alley turned around and wiggled her perky bum towards the camera teasing her 76,000 TikTok fans.

The waitress claimed in the caption: “We have self respect I promise.”

Many people took the comments with messages of empowerment for the pair of waitresses, supporting the pair and their job role. One person voiced: “Repeat after me: Your job and your clothes don’t define your person.”

Another user added: “Whoever said that (is) just jealous they can’t fit into those shorts.”

While a third fan gushed: “You girls look beautiful!! Nevermind the haters.”

Someone else remarked: “They’re making that money…no hate when they’re willing to have a job! Nothing but love for the waitresses.”

As a fifth person expressed: “Y’all are queens. Don’t listen to the jealous.”