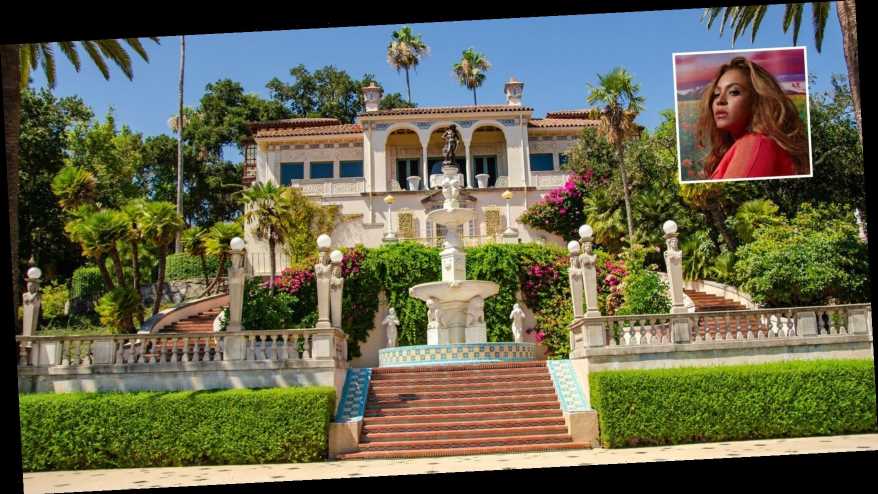 When it comes to luxury estates, no place in the nation comes close to the posh homes in Beverly Hills. At bird’s eve view, there’s a sea of million to billion dollar properties. The Hearst Estate, one of the city’s most iconic homes – of the Godfather and Black is King fame – is finally back on the market for lucky big spenders. Those with pockets full enough to afford the $89.75 million mansion would ultimately live in a huge piece of entertainment history.

Famed architect Gordon Kaufman build this dazzling Mediterranean Revival home in 1927 for banker Milton Getz. The mansion was then owned by acclaimed actress, Marion Davies for her husband Willlam Hearst in 1947. The fame house covers 29,000 acres of land, a large feat for the glamorous 90120. Inside the main house are eight bedrooms and more than double the amount of restrooms. It also features lush hand painted ceilings, a two story library, and even a nightclub with a bar furnished from Hugh Hefner’s old club, Touch.  The amazement doesn’t stop there as behind the mansion sits two guest homes that cover 3.5 acres.

Yet, amidst all these truly outstanding amenities, a major selling point for many prospective buyers is the mansions numerous appearances on the big screen. Who can forget the iconic scene of the Godfather when an unlucky foe of Vito Corleone discovers the head of a horse in his bed? Or, more recently, its stunning feature in Beyonce’s 2020 visual album, Black is King? Fun fact, before his assassination, John F. Kennedy and Jacky Kennedy choice the mansion as the backdrop for their honeymoon in 1957. Surely there are some wealthy elites that would happily pay up to live in such an iconic estate.

The selling of this home although came out of unfortunate circumstances for the soon-to-be former owner, Leonard M. Ross filed for bankruptcy by the lofty price of this estate. He tried to sell the mansion in 2016 for a whopping $195 million to no avail. As a result, he’s accumulated an outstanding debt of $50 million! The lender of the home, Fortress Investment Group, achieved in getting the court to allow a forced sale.

With tons of balconies, a huge pool house, and a stone fireplace that’s been moved from the even more stunning Hearst Castle in Saint Siemon, this home really has it all and more.

Read Next: The Top 10 2021 Most Expensive Celebrity Mansions Sold or Listed So Far, Ranked