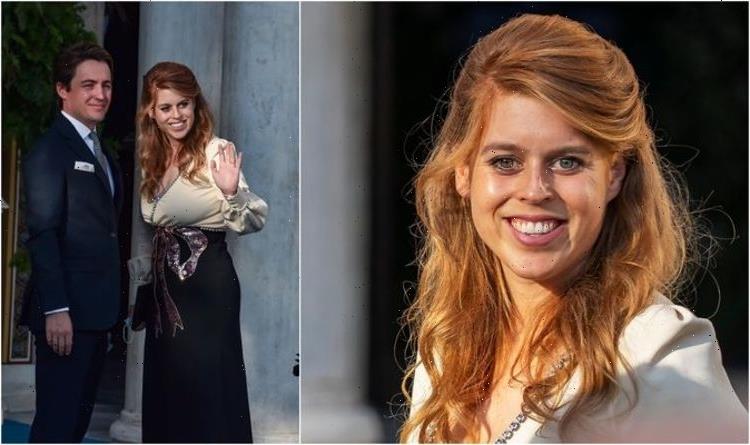 Princess Beatrice married Edoardo Mapelli Mozzi on July 17, 2020, in a secure and private wedding at the Royal Chapel of All Saints, Royal Lodge, Windsor. Their wedding took place at the height of coronavirus restrictions, therefore had to be a smaller affair than normal royal weddings. According to the hosts of the royal podcast Royally Obsessed, Roberta Fiorito and Rachel Bowie, Princess Beatrice nearly broke royal protocol with her original wedding plans prior to the pandemic.

On an episode of Royally Obsessed, the hosts were discussing the origin of Beatrice and Edoardo’s daughter’s name, and then gave slip the fact Beatrice nearly broke royal protocol with her original wedding plans.

Roberta said: “Beatrice and Edo wanted an ‘S’ name to honour Sarah, Beatrice’s mother, but also Sienna is a red and burnt orange colour, so I guess that’s a tribute to Fergie and Beatrice’s hair.

“According to a source, Sienna the Italian city is supposedly where they were going to have their original wedding, which would have broken such tradition by having a royal wedding, not in the UK.

“Sarah Ferguson was sleuthing out wedding venues in August 2019, which I think was before they even announced their engagement.

“But she had sleuthed out this gorgeous villa in Siena, Italy and so I think that may be why they picked the name because their original wedding was supposed to be there.”

The original wedding was scheduled to take place in May 2020, however, the country was under lockdown at the time so the wedding had to be postponed.

After being restricted due to the pandemic, the couple decided to hold a private ceremony with their parents and siblings in July 2020.

There was speculation that Beatrice would marry abroad, as Fergie headed to Villa Cetinale in 2019, which is 12km off the city of Siena.

This would have broken royal protocol, as the British Royal Family have always married in the UK.

For instance, the Queen in 1947 and later Prince William and Kate Middleton in 2011 got married in Westminster Abbey in London.

Princess Diana also got married in London in 1981, however, opted for St Paul’s Cathedral as it allowed for a larger congregation to attend.

Prince Harry and Meghan Markle, as well as his cousin Princess Eugenie, all got married in St George’s Chapel in Windsor Castle in 2018.

Even more minor royals like Zara Phillips got married in the UK, as she tied the knot with rugby player Mike Tindall in Canongate Kirk in Edinburgh in 2011.

However, due to the pandemic, Beatrice and Edoardo got married in the UK with a few attendees in what was a very private affair by royal standards.

Princess Beatrice paid homage to the Queen on her special day, by loaning a vintage gown by designer Norman Hartnell that belongs to her grandmother.

Queen Elizabeth wore the dress in 1962 to the premiere of Lawrence of Arabia at the Odeon Theatre in Leicester Square, and to a 1961 state dinner in Rome.

Beatrice also wore the Queen Mary tiara, the same one that Her Majesty wore during her wedding to Prince Philip.

It is said that the wedding was done around the Queen’s schedule, to ensure she and Prince Philip could both attend.