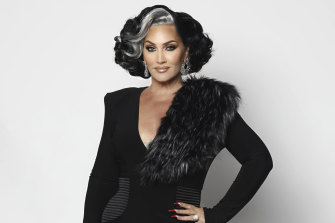 Michelle Visage, 53, is the breakout star of the Drag Race franchise.

When the gay community was wholly outside the mainstream, drag shows were its off-off-Broadway, a kind of razzle-dazzle that turned the back corner of a neighbourhood gay bar into a smudged reflection of the New York stage. They were complete with showgirls, sequins and 11 o’clock numbers, those show-stopping songs that close out big-ticket musicals.

RuPaul’s Drag Race Down Under judge Michelle Visage first saw drag when she was 17. “I didn’t really know much else except I liked the way it looked, and it was very queer,” she says. “Even the word ‘queer’ back then, it was offensive and now, beautifully, it’s been reclaimed. For me, a kid from central New Jersey, I jived with the thought of somebody being able to be who they want to be.

“It was the first time I found my family, my people, and no, I wasn’t gay; I was this lower-middle class, white girl from South Plainfield, New Jersey, who wouldn’t be a likely candidate – cisgender heteronormative presenting – and then they welcomed me in.”

Visage, who appears on the US, UK and Australian editions of the Drag Race format, says she felt like she had found her place. “And I thought, I will never leave, I will never go back,” she says. “I will never get famous and then forget about the gay community. It’s the community that I always walk hand in hand with because they have always been my family.” 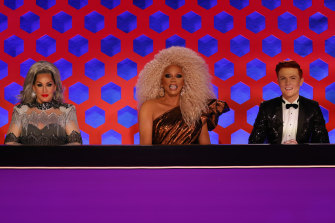 The complicated cultural side note – how drag interacts with trans culture, whether it is offensive, whether there is a trans perspective on drag – is a thorny issue for some. Visage, as a cisgender woman, is perhaps unqualified to comment. When I tackle the subject with her, she readily admits she “can’t speak on behalf of trans people”.

That speaks easily to the success of the Drag Race format. A stepchild of sorts to American Idol and Project Runway, it puts a group of aspiring or established drag queens in competition against each other in a series of challenges that test their skills in costume design, performance and showmanship.

If the show’s producer and host RuPaul is the deity at the centre of the cult of worship that surrounds the Drag Race format, then Visage, the New Jersey-born singer, actress, dancer and former showgirl, is its breakout star.

When I think of Australian drag, it’s got comedy, it’s not hard, almost like British drag.

While Jersey itself is frequently the butt of jokes – thank you, Jersey Shore – you could also wonder what they’re putting in the tap water. Aside from Jersey Shore’s perennial D-lister Snooki, America’s garden state also gave us Jon Bon Jovi, Jack Nicholson and Meryl Streep, as well as Frank Sinatra, Whitney Houston, Gloria Gaynor, James Gandolfini and Bruce Springsteen.

“I wear my state with pride,” says Visage. “You can take the girl out of Jersey, but no, you can’t take Jersey out of the girl, and that’s OK. I spent 17 years of my life there, I grew up there. I think New Jersey gets a bad rap, because of shows like Jersey Shore. It is a big part of who I am, and I’m very proud of it.” 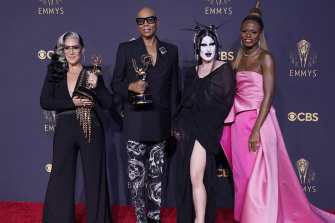 Visage, 53, crossed paths with RuPaul for the first time in New York in the 1980s. They moved in the same circles but did not properly become friends until a decade later when the pair shared a moment backstage at a show. Visage was hesitant, unsure if RuPaul remembered her, but he said to her: “Girl stop, you are a motherf—ing superstar.”

Visage says: “It was the first time in my life that somebody told me that I was a superstar apart from my mum and dad.”

Encouragement matters, Visage says. Perhaps most in a television culture which, in the past two decades, indulged in the increasingly unwelcome art of humiliation. Studio formats such as American Idol, or Britain’s Got Talent, which to some extent can be felt within the framework of Drag Race, also use audition, performance and competition elements. 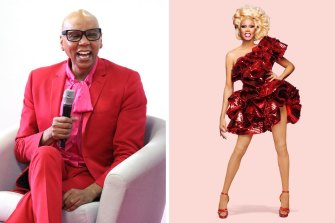 RuPaul Charles is the deity at the centre of the cult of worship that surrounds the Drag Race format.Credit:Getty Images, Supplied

But those older, perhaps more mainstream formats were known for snide asides and the “nasty judge” trope. Those elements, while popular in the 1990s and 2000s, are unwelcome on Drag Race, says Visage. Instead, Drag Race tries to strike a balance between encouragement and what might be described as a maternally firm hand.

“I had a mother who was from Brooklyn, who tried to protect me in every way that she could,” she says. “But she also [gave me] tough love in the sense that she had said many times to me, the world is not a nice place, if I don’t prepare you, you’re not going to be prepared.”

The popularity of the TV format around the world also taps into the notion that while drag is a very universal art form, it is also deeply regional.

“Australian drag will be different from the rest of the world because of where it is. When I think of Australian drag, it’s got comedy, it’s not hard, almost like British drag. It’s not as fiercely polished as the Americans want to make it now, like an Instagram photo.”

You need to not only look good, but you need to be what they call in the pageant world the total package. You need to have all of it.

“You’ve heard me say over the years, ‘OK, you’re pretty, what else can you do? We need more.’ What I love about [Australian] drag is that there’s still a roughness to it, and that makes it authentic and that makes it vulnerable. And I love that.” 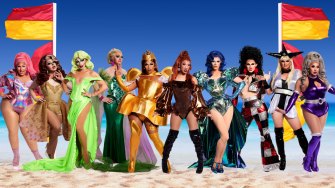 The competitors on the new season of RuPaul’s Drag Race Down Under.Credit:Stan

Modern drag too, perhaps, owes as much to the culture of traditional drag as it does to the nascent beauty pageant industry of the 1970s and 1980s. In that sense RuPaul’s Drag Race looks more like a Miss America, Miss World or Miss Universe pageant at times as much as it does anything else in the same genre on television.

“I think it definitely plays a part,” says Visage. “I think all little gay boys growing up would watch the Miss America pageant. Everyone that I know anyway. Queer pageantry is different from straight [pageantry], but they all have the glamour and fabulousness of walking that stage and having those crowns and being gorgeous in a gown.”

What has changed, too, is the scale and depth of the commercial side of the drag business. While there are still small-town bars with a corner stage and a drag micro-culture, the popularity of Drag Race, and the film and stage musical of Priscilla, Queen of the Desert, has pushed drag into the commercial mainstream.

“Well, it’s now a business; when I was growing up, it wasn’t a business,” Visage says. “Those kids had day jobs, and then they would go to clubs six or seven nights a week and do their drag show because drag queens didn’t really get tips. They got paid, if they were lucky, I don’t know, $50 a night.

“But it’s a business now, so that’s why the expectations are high because RuPaul’s Drag Race made expectations high. You need to not only look good, but you need to be what they call in the pageant world the total package. You need to have all of it. You need to know how to sew, to sing, to act. And by the way, not always well. You just need to be able to fake it so you make it.”

RuPaul’s Drag Race Down Under (season 2) is on Stan from July 30. Stan is owned by Nine, the owner of this masthead.