Global warming is now projected to peak at 1.9 degrees this century due to pledges made at the COP26 climate talks and the days beforehand, according to a new analysis.

It is the first credible projection that suggests warming could be held at less than 2 degrees. 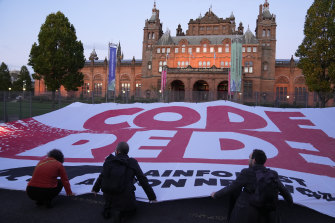 Similar analysis of pledges and reductions goals made just weeks before the Glasgow talks placed the world on a trajectory for a catastrophic 2.7-degree temperature rise.

The analysis, which was prepared by an expert team including Professor Malte Meinshausen, an Associate Professor at the University of Melbourne, assumes that all the commitments and pledges made are kept, and that funding is found to help developing nations reach their targets.

“It is a very credible analysis,” said Dr Simon Bradshaw, chief researcher with the Australia’s Climate Council, who is attending the talks in Scotland. “But a lot of things would have to go right, and it is still a long way from the goal of keeping [the Paris target of ] ‘1.5 alive’.”

The analysis takes into account the announcement that India had set its first net zero target, as well as a pledge by around 80 nations to reduce methane emissions by 30 per cent by 2030, and a second pledge by almost 100 nations including Australia to end deforestation by the same date, as well as newly announced national 2030 reduction goals.

Organisers hope that side deals and pledges, when combined with the official UN negotiations, will see the Glasgow talks succeed. Showing momentum at the start of the talks is seen as vital for a positive outcome.

During the climate talks’ third day, which had a focus on finance, it was announced that any company listed on the United Kingdom stock exchange will soon need to have a plan in place to get to net zero.

It was also announced that firms representing $130 trillion of assets had joined the Glasgow Financial Alliance for Net Zero, which was established in April with just $70 trillion committed.

“I’d say it is a big f—ing deal, and you can quote me on that,” said Nigel Topping, a so-called High Level Champion for the talks appointed by the UN with a brief to help harness private sector support for the goal of achieving Paris Agreement targets.

“This is now disruptive change, it has gone exponential,” he told The Sydney Morning Herald and The Age.

Banks and asset managers representing around 40 per cent of the world’s financial assets have now signed up to the Alliance, and as signatories must use science-based guidelines to hit net zero carbon emissions by 2050 and meet 2030 interim goals.

Larry Fink, the chief executive of BlackRock which has $10 trillion of assets under management and has made climate considerations central to its investment approach, told a panel hosted by the Financial Times that focusing only on money and assets controlled by public companies, banks and financial institutions was “not going to change the world” and could drive more hydrocarbons from public to private entities.

“If we’re serious about this … we have to ask all of society to move forward, or we’re lying to ourselves, we will not get to a net zero.”

Attending a breakfast briefing of mayors from cities around the world, US climate envoy John Kerry said the world had a 60 per cent chance of reaching the goal of capping a rise in average temperatures at 1.5 degrees.

He said an estimated 65 per cent of the global economy was now covered by implementable climate change plans.

The word has already warmed 1.1 degrees, and some projections suggest it is inevitable warming will break through 1.5 degrees in the coming years, even if we are able to pull it back later this century.

Get daily updates on the climate summit that will shape our future. Sign up to our COP26 newsletter here.

03/11/2021 Lifestyle Comments Off on If pledges already made at Glasgow are met, warming ‘to peak below 2 degrees’
Lifestyle