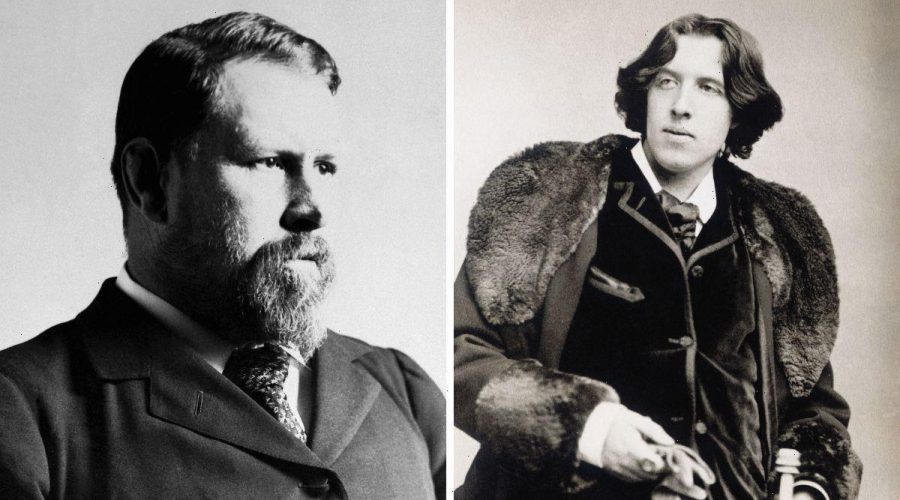 Dracula comes to blows with Sister Agatha in episode two

Today marks iconic Dracula author Bram Stoker’s birthday, the celebrated writer having been born on November 8, 1847. He enjoyed an incredible career as he combined writing his unique horror stories with a role as personal assistant to actor Sir Henry Irving, in addition to his work as manager of the West End’s Lyceum Theatre. His efforts in the world of literature began after he started working as a theatre critic for an Irish newspaper. This is where the Dublin-born Stoker found the inspiration for his Dracula novel years later, when visiting the English coastal town of Whitby.

But while his novel Dracula remains one of the most famous pieces of English literature, with countless incarnations of the vampire appearing in film, TV and on the stage, Stoker’s real life, and the relationships he enjoyed, often remain firmly in the history books.

Among the strong bonds Stoker shared was with fellow writer Oscar Wilde, similarly a Dubliner who became one of London’s most popular playwrights, and the author behind books such as The Picture of Dorian Gray and The Importance of Being Earnest.

Stoker and Wilde continued their friendship throughout their lives and were fond of each other. But unearthed accounts show that the former actually stole the affection of the latter’s flame.

Florence Balcombe, daughter of Lt. Col. James Balcombe, married Stoker in December 1878, and supported the author as he made his way in London’s theatrical circles. The Devon-born woman herself had grown up in Dublin, with their nuptials happening in the Irish capital.

Barely days after their marriage was finalised, the pair made the move to London, where Stoker began his working relationship with the theatre.

Before they had wed, Florence for a time dated Wilde, who according to the Bram Stoker estate “displayed his penchant for drama after their breakup, requesting she return a trinket while sending her flowers anonymously”.

It continued: “There must have been no lasting ill will, as the Stokers remained friends with Oscar and the Wilde family (Oscar’s older brother Willie was a classmate and friend of Bram’s at Trinity, and their mother, Lady Speranza Wilde, was influential in her support of Bram’s career). “

The start of Florence and Stoker’s relationship reportedly hurt Wilde, as he and the Dracula author had been good friends during their years as students. Such was their closeness, Stoker even reportedly proposed Wilde for membership of their university’s Philosophical Society while he was president. Florence and Stoker would stay together until his death in 1912.

According to The Franken Pod, which released an episode detailing the writers’ relationship titled The Dracula Connection, a month after Wilde was imprisoned for gross indecency in May 1895, Stoker began writing Dracula, with Count Dracula said to be based on Wile.

In an accompanying article, The Franken Pod wrote that the novel was “filled with transgressive sexual and a text which has been of great interest when applying queer theory to the Gothic English literary canon. Whilst correlation is not causation, this timing may not be entirely without meaning”.

It continued: “We don’t know much about Stoker’s life (due to his own Charlotte Brontë style curation), but an overwhelming number of scholars assert his role as a ‘gay observer’.

“This is has something to do with close textual interpretations and some of the more blatant homoeroticism in his most acclaimed work, Dracula, and with writings that have been discovered as part of a recently recovered ‘Journal’.”

The podcast noted that The Count in Dracula is “similar to the caricature of Wilde that developed during his trials,” adding: “Suffice to say that Dracula and vampirism are a direct threat to the moral fibre of 19th century Christian British moral fibre, in much the same way as many saw Wilde and “transgressive” sexuality.

“This idea that you can catch homosexuality has never quite gone away sadly.”

History would show these two Irishmen as close, but according to author Talia Schaffer in a 2021 piece for Medium, Stoker “never mentions” Wilde “even in a 12-page list of his famous acquaintances”.

She continued: “His desire is imprisoned in cryptic texts; his private life undecipherable through thick layers of transference.

“Endlessly secretive, Stoker is the great codifier, the author who dared not speak his own name. Instead, he transforms it into numerous riddles and fictions…”

Wilde’s role as The Count was also detailed in a 1997 study by Nina Auerbach, who wrote in the book, Our Vampires, Ourselves: “Dracula was one particularly debased incarnation of the fallen Wilde, a monster of silence and exile…”