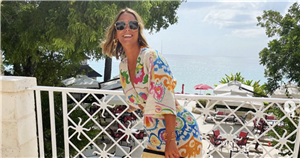 Frankie Bridge has given a glimpse inside her Barbados getaway with her husband Wayne and their two adorable boys.

The songstress, 32, who has recently revealed that she was waiting to be admitted to psychiatric ward while filming a music video with The Saturdays, has given a peek inside her idyllic getaway to the five-star Sandy Lane Hotel in Barbados.

Frankie, who shares sons Carter, six, and Parker seven, with former footballer Wayne, 41, looked very content with her surroundings as she posed for a sweet family snap with her brood, captioned: "My guys".

Meanwhile the Loose Women star also shared a snap of the family to her 1.3million Instagram followers enjoying 'sunset swims' in the turquoise Caribbean Sea before sharing a 'golden hour' selfie to show off her radiant skin and sea-salt tresses.

Frankie also raised a strawberry daiquiri to her much-needed vacation but later revealed how she could only 'handle one' of the frozen tipples.

The mum-of-two also gave a glimpse of the stunning powder white beach at the world famous resort which offers a two-bedroom penthouse suite set among manicured gardens for £3,281 per night.

Frankie also looked gorgeous as she posed in a cut-out Zara dress against the backdrop of the gorgeous sun-soaked view.

Elsewhere Wayne also posted a collection of family snaps to his 255,000 followers on Instagram including one with his beautiful wife Frankie along with a snap of his boys playing in the sea.

Captioning the post, he penned: "The only two pictures we’ve managed to get in six days…"

It comes after Frankie revealed that she had been booked into a hospital to tackle her worsening mental health for the day after the 2011 shoot for My Heart Takes Over.

Speaking on Thursday's Loose Women, she explained that husband Wayne and her GP had arranged for her to spend some time in a psychiatric hospital to help get her depression and anxiety under control – but that she had to complete a day's music video filming in Iceland first.

She said: "I'd mentally prepared myself, this is going to be my last job, then I'll go to the hospital.

"I look at that video and I just feel that I look dead behind the eyes. I looked so slim…"

However, Frankie's mental health took another hit when the bad weather meant that the shoot in Iceland might run into two days instead.

The singer, whose bandmates didn't know of her plans to go to hospital while they were filming, said: "This anxiety hit me and I remember just looking at my manager, like begging him, please, I can't, I've mentally prepared myself for this one day.

"On the way back we were pictured at the airport, Wayne came to pick me up and we just looked like a happy couple, but actually we were both aware that I was leaving and going straight to this hospital."