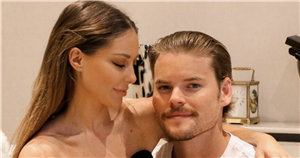 Louise Thompson has announced the heartwarming news that she has welcomed her first child with fiancé Ryan Libbey.

The former Made in Chelsea star, 31, shared the sweet announcement with her 1.3 million Instagram followers, where she introduced the couple's baby son Leo-Hunter Libbey.

But when did the couple first start dating? Let’s take a look at their relationship timeline…

When did Louise and Ryan meet?

Louise split from her ex-boyfriend Alik Alfus in 2016 following a two-year relationship after she was not prepared to re-locate with him to New York.

Ryan made his Made in Chelsea debut on the South of France spinoff series in August 2016 and was introduced to Binky Felstead and Ollie Locke.

Speaking about how the couple met, Ryan said: “We met in Mayfair at my old workplace – in a gym. She came down for a training session.

Ryan was pictured at Sam Thompson’s 24 th birthday at The Ivy Chelsea Garden in August 2016.

The personal trainer was introduced to Louise’s mum along with Sam’s now ex-girlfriend Tiffany Watson.

When did the Ryan pop the question to Louise?

The former Made in Chelsea star had been dating boyfriend Ryan for two years before he popped the question.

Speaking with OK!, Louise details how her boyfriend popped the question in style.

“We were in LA for Ryan’s birthday and I know how much birthdays mean to him, so I was panicking all day,” Louise says.

“In the evening, Ryan said: ‘I really want to go on a hike,’ and I was like: ‘I’m really tired – and we’ve got dinner plans.’ but he convinced me to come.” Louise continues.

Louise said Ryan led her to the top of a hill in LA, before finding a more private area off the track.

Ryan explained: “I didn’t have a speech, but I had a few things I wanted to say.

“I said something like: ‘I’ve had the best birthday ever, but there’s one more birthday wish I’d like. Will you marry me?”

Ryan described how he was on one knee for “what felt like a lifetime” before Louise said yes.

Where do they live?

The couple live in a gorgeous London townhouse which is next door to Louise’s brother Sam Thompson and his girlfriend Zara McDermott.

Ryan revealed how he thinks the finished look of the home is “Soho Farmhouse style” but admitted that it was Louise who called the shots when it came to interior design.

Ryan moved in with Louise five years ago and the couple now use the space as the headquarters for their business Live Like Louise.

When did they get matching tattoos?

Ryan was persuaded to have a tattoo of Louise’s name by her brother Sam during an episode of Made in Chelsea which aired in November 2017.

The fitness star had Louise’s name inked onto his wrist at a tattoo parlour with Sam and Oliver Proudlock.

Ryan revealed his wrist to Louise, who exclaimed: “That’s not real! Are you serious! Bub, that is so intense!”

In August 2020 Louise shared an Instagram snap to reveal her matching tattoo which Ryan’s name during their trip to Italy.

Louise had Ryan inked onto her ankle and shared a snap alongside her fiancé, captioned: “First. And. Last.

“I wish I could say quarter life crisis but that would give me a damn good innings.”

How did they announce their pregnancy?

The couple looked radiant with happiness as 30 year old dad-to-be Ryan held onto the scan snap while Louise sat on his lap and clutched onto a pair of tiny shoes.

Louise then gushed in the caption: “Counting our blessings” surrounded by two rainbow emojis.

She described the first 12 weeks of her pregnancy as she went on: “I thought I’d have all sorts of creative ways to deliver this information but the truth is the last 12 weeks have been quite challenging.

“Unlike last time, Ryan and I haven’t documented our journey at all.

“I’ve hardly taken any pictures or videos for fear that something might happen.”

The mum-to-be then admitted: “I’ve also felt like A**. I never knew that fatigue or ‘flatness’ like this existed in pregnancy.

“There are 0 before and after snaps, no week-to-week transformations or fun reveal videos with friends and family leading a trail of buns to an oven, instead there is a drawer filled with 10000000x billion gazillion pregnancy tests (shameless and expensive) and some sensitive conversations where we try not to get too excited.

“I’d be lying if I said it’s been an easy ride but the truth is I think poor Ryan has found it even harder than I have.”

Louise then took the opportunity to praise her man Ryan as she gushed: “I’m definitely lucky to have such a sensitive partner and I feel safe in the knowledge that you are going to be the best dad in the world.”

When was their baby born?

Louise took to Instagram to announce the birth of her and Ryan's first child, Leo-Hunter Libbey, five weeks after his arrival.

The new mum revealed she'd kept the birth private due to suffering severe complications, which saw both Louise and baby Leo admitted to ICU.

Louise shared an adorable snap of the newborn to her 1.3million Instagram followers as she announced the 'happy news' that the pair have been discharged from hospital to 'recover' at home for Christmas.

The former Made in Chelsea star then happily told fans: "I can't wait to start our new journey together as a family of 3 and to start bonding [with] little baby Leo."