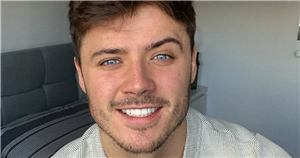 Love Island hunk Brad McClelland has caught the eye of beauty Faye Winter and the pair are officially in a couple.

But when he is not sunning himself in the villa, Brad, 25, who has been single for two years, lives with his 76 year old Nanna in Northumberland.

The labourer, who shared the first kiss of the 2021 series on Monday, has also revealed that he is not worried about his grandmother watching his steamy sex scenes and described her as “very down to earth”.

Taking a look inside his bedroom, Brad has opted for a chic grey theme as seen by a padded headboard and striped sheets on the double bed.

The walls have been given a lick of fresh, white paint and Brad has a sleek bedside table where we can see a protein shaker – a must-have for the reality star who dramatically transformed his physique in ten weeks.

Brad also has pale grey curtains to complement the décor and a huge TV in front of the bed to relax when he is not working away as a labourer.

The reality star also appears to be very sentimental and has a collection of family pictures on a cabinet in his bedroom.

We can also see a large white wardrobe which is certain to be stacked with plenty of workout attire.

It comes after Brad has described how he blames the pandemic for his dry patch after splitting with his ex-girlfriend as he refuses to do dating apps.

He says: “I split up with my girlfriend, had a couple of months of going out and boom,Covidhit.

“I don’t do dating apps because it’s just small talk. You match with someone, you say ‘hello, where are you from?’ and the conversation stops and you’re onto the next one.

“As for the villa, I don’t have a game plan. I am just going to be myself as that’s what got me on the show to start with and it has always worked for me.”