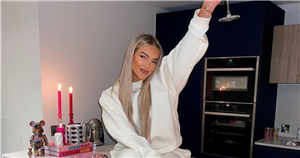 The 22 year old model took to Instagram to announce that she had finally moved into her own home, as she shared a snap of herself posing on the kitchen counter.

Mary looked stunning in a white tracksuit paired with beige sliders, as she donned her signature glam make-up look.

Holding a glass of wine, she excitedly told her fans: "It’s official, I have my own apartment to get drunk in every night", as she celebrated the milestone.

The picture gave fans a glimpse into the star's new home, which she then revealed more of on her Youtube channel later on.

The post was liked over 100,000 times as Instagram users flocked to congratulate Mary on her new pad. Many of her Love Island co-stars sent well wishes, including 2021 winner Millie Court who wrote: "Congrats girly", and runner-up Chloe Burrows, who added: "Congrats girl!!!!"

Mary, 22, then took to her Youtube channel to document her moving process, where she gave fans another peek into her swanky new pad.

She started off by explaining how excited she was, as she waited in Leeds to make the big move. She said: "I can't believe it. I've literally been counting down the days like it's Christmas!"

Mary then showed her fans around her new abode, taking them first through her bedroom and then into the apartment's main bathroom.

She explained how all of her new furniture had been ordered, and she was set to replace the items already in the flat.

The star's huge double bedroom features light grey carpets and glossy white doors with gold handles. Mary revealed she was awaiting the delivery of her custom-made bed, which she'd had designed by The Luxury Bed Company.

She showed fans around her main bathroom and her guest bathroom, which are both decorated with stylish marble tiles.

Mary showed off her new purchases for the bathrooms, which included a selection of fresh white towels, a wooden bath tray, and luxury hand soap.

She then re-entered the open plan kitchen and living room area of the flat, as she set about showing fans what she had recently purchased for her new home.

Mary revealed she'd been super busy all weekend shopping for all of the essentials she needed to move into her first apartment, and she'd also been busy picking out the perfect decor.

The model showed off her hot pink candles that were lit in the kitchen area, as well as two huge pink books which she'd picked up after one of her friends had recently purchased them.

The kitchen in the apartment could be seen in the background, which features sleek black fittings and glossy white counter tops.

The living room had a huge grey and silver patterned rug covering the laminate flooring, and a stylish black coffee table could be seen in front of a dark grey sofa.

The blonde beauty concluded her video by telling fans she was really excited about finally having her own place, and that she was celebrating with a well deserved glass of wine.

Mary shot to fame when she entered the Love Island villa as part of the Casa Amor twist earlier this summer, and has amassed a huge fanbase off the back of the popular show. Her glam make-up looks and sleek hair 'dos proved popular with viewers, as she continued to be praised for her stylish looks each evening.

Mary enjoyed a short-lived romance with footballer Aaron Simpson before the pair were both dumped from the show, and they soon split.

For all the latest celebrity gossip, sign up to our daily newsletter here .