Made from liquid sugar stabilised by gelatin, it’s a joyfully insubstantial confection. But, sadly, Boomf, the company which charged £19.99 for sending a box of nine personalised marshmallows through the post, has proved equally fragile.

The firm, founded by James Middleton, the Duchess of Cambridge’s younger brother, fell into administration last month with heavy losses after eight years.

Last week its creditors — many of them also small businesses — were told that they face getting just 25p in the £1 of their money back.

Boomf’s well-heeled investors have had to face up to the not-so-sweet reality that they have poured hard cash into a commercially flimsy proposition.

Some £2.2 million was raised by Middleton and ploughed into the business, which had branched out into other postal gifts and cards.

Its accumulated losses stand at £2 million.

Rather embarrassingly for Middleton, 34, who called himself the ‘Wonka in chief’ — a reference to Roald Dahl’s fictional confectionary genius Willy Wonka — shareholders include his brother-in-law James Matthews, married to his older sister Pippa.

Nick Jenkins, the Moonpig greetings card mogul and a former Dragons’ Den judge on TV, is another. He came on board as chairman in 2014 after investing and it was his success Middleton had hoped to emulate.

In a statement when joining, Jenkins said: ‘Boomf is a very personal and rather tasty way to say happy birthday, thank you or congratulations. A card you can eat. What is not to like about that!?’

Certainly, the Estonian businessman who snapped up the failing business this month for the relatively small sum of £300,000 (Middleton reckoned it was worth £10 million in an interview in 2015) will be pleased with his bargain.

As will Boomf’s 29 staff, based in Reading, who will keep their jobs. Not so happy, one imagines, are the shareholders who will surely be rueing their investment.

Others who bankrolled the venture include royal chum Charlie Gilkes, who founded the Bunga Bunga night club where Prince Harry liked to party. Another shareholder is Quintessentially Ventures Ltd, a ‘private members’ investment club for sophisticated investors’.

Middleton said that he had drawn around £2.2 million in investment in Boomf in total. He commented in an interview: ‘This is not a business propped up by friends or family.

That calibre of investors do not just give handouts. They are people who want us to make a return for them.’

The administrators’ ‘proposal’ for the business also makes sombre reading. As is customary, the taxman will be paid in full but the other creditors face getting only a quarter of what they are owed.

They include marketing agencies, print companies and even the providers of envelopes. One of the largest, an investment company called Forward Partners, is due £350,000 and can expect to get £87,500. They declined to comment this week. 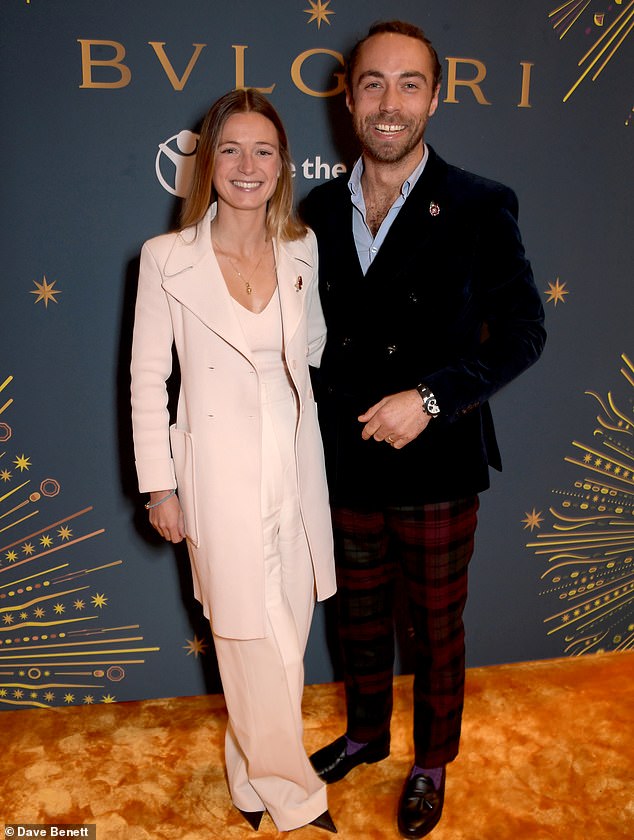 Some £2.2 million was raised by Middleton (pictured with wife Alizee Thevenet) and ploughed into the business, which had branched out into other postal gifts and cards.

In total, the sum of £414,000 is outstanding to creditors. Chris Goslar, of the print company Chroma in Reading, said: ‘We would prefer not to discuss Boomf.’ He’s owed just under £5,000. Erica Ashner of the internet analytics agency Contentsquare, out of pocket to the tune of £17,661, feels the same way.

Boomf also went down with unsettled marketing debts: Facebook is a creditor to the tune of £55,000 and two separate digital marketing and analytics firms are owed a further £76,000.

It’s a disappointing outcome for a man who once told friends he hoped to be the next Richard Branson. Not, it should be noted, that Middleton’s marshmallows were an outright disaster.

After a rocky start — between 2013 and 2018 Boomf recorded losses of £3 million — there were some signs that its fortunes were turning around.

The firm reported a profit of £175,000 in December 2019 and a profit of £1,107,222 in accounts filed for 2020. No furlough claims were made during the pandemic and, as the draft accounts for 2021 show, the company turned over plenty of money during lockdown as it doesn’t rely on any physical purchasing.

However, by late last year, a cash crisis had arisen owing to business costs, at which point the shareholders decided not to spend further funds saving it.

The administrators make a series of stark findings, among them that the company was so in thrall to marketing and advertising that it was spending £5 to attract each customer order.

‘The cost of customer acquisition had significantly increased in 2021, nearly doubling to £5 per customer,’ the administrators note. Meanwhile, the profit margin on each order was just £1.

The business was heavily seasonal — hitting a peak between February and May when people were buying for Valentine’s Day and Easter — and falling off afterwards.

Repeat orders were low, indicating perhaps that the product was less fantastic in reality than the advertising suggested.

And a management decision to reinvest all profits into developing the website seems to have sealed its fate.

Draft accounts up to December 2021, when the plug was pulled, show a turnover of £9.1 million. However the cost of sales — which includes manufacture, overheads and advertising — was punishing, standing at £4.1 million.

Taking into account ‘other expenses’ meant that Boomf made a loss of £686,000.

As the administrator’s report states: ‘The company had exhausted its available cash resources and its cash constraints were impacting on its ability to continue trading and no further funding was available from the company’s shareholders or third parties.’

Sophie Dummer, its chief executive, commented: ‘As a niche personalised brand, it has become difficult for Boomf to survive as a standalone business in this increasingly competitive environment.’

Naturally it’s an enormous blow for James Middleton, whose delighted face was all over the marketing.

More than that, the collapse of this venture marks a dubious hat-trick for Middleton, who with three failed companies now under his belt, has yet to display the business acumen for which his mother is famed.

The contrast with Carole — who built her Party Pieces business, said to be worth £30 million, into a successful firm from her kitchen table when James, Pippa and Catherine were children — could not be more stark. 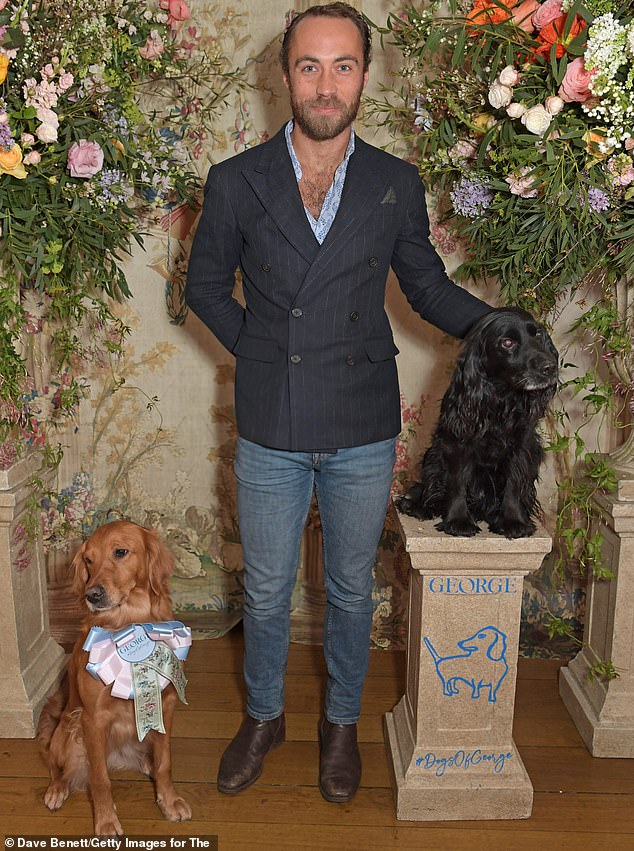 Rather embarrassingly for Middleton, 34, who called himself the ‘Wonka in chief’ — a reference to Roald Dahl’s fictional confectionary genius Willy Wonka — shareholders include his brother-in-law James Matthews, married to his older sister Pippa

The Middleton family is famously tight-knit and they have long supported James in his bid to become a successful businessman.

It was uncle Gary Goldsmith — Carole’s flamboyant younger brother, a successful businessman and James’s godfather — who loaned James £11,000 to start his first business, the Cake Kit company, which aimed to provide kits for people too busy to bake.

The Nice Group, which took revenues from James’s two businesses The Cake Kit Company and Nice Cakes, which produced cupcakes for upmarket social events, reported losses for five successive years before it was closed in 2017. According to Companies House, the firm lost £130,179 in total.

James said: ‘They did not fail. When you first go into a job, you start at the bottom and work your way up — you learn.

‘With the Cake Kit Company, I had difficulty scaling it up. I learnt from that and applied the lessons at Nice Cakes. Then you find other issues. You can’t fit a cake through a letterbox, cakes are fragile and so on. So that developed into marshmallows.

‘So those companies shut down, but I shut them down myself and did so with my head held high. I learnt so much from them. That is important.’

Quite what Middleton — a gentle and somewhat eccentric character who seems happiest when in the countryside with his dogs — will learn from this latest reversal of fortune is yet to be seen.

Last summer he and new wife Alizee Thevenet, a French financial analyst, moved into a £1.45 million Grade II-listed farmhouse near the £4.7 million Middleton family home in Bucklebury, Berkshire. Sister Pippa also has a farmhouse in the village.

He has been calling on sister Kate to help him decorate his first ‘proper’ home. They were seen shopping in Hungerford for home interior items together.

He has spoken, and written, movingly about his long struggles with depression, which he called a ‘cancer of the mind’ and which brought him to the brink in 2017.

He was also recently diagnosed with attention deficit hyperactivity disorder, which he says explains his ‘restless’ and ‘impulsive’ character — but also his creative spark.

However, James is not giving up on his business ambitions. He is now concentrating on Ella & Co, the ‘happiness and wellbeing’ company for dogs which sells freeze-dried and cold-pressed raw dog food.

Documents filed at Companies House show Middleton is the founder and shareholder of Hello Ella, which was set up in the spring of 2019.

Accounts filed last year show that in the period between April 2019 and April 2020 — before it launched — it made a £170,000 loss. Intriguingly, the business has its headquarters in Poundbury, Dorset, the Prince Charles model village.

Middleton clearly has great hopes for the dog food, and promises your dog’s ‘coat, energy level and poos will improve’ within a few days.

It uses ‘human-grade’ meat, fish and vegetables and has been inspired by his love for cocker spaniel Ella, one of his six dogs, who helped him through the struggle with depression.

He says of her: ‘She is my teacher, therapist and best friend.’

He also writes a blog on the website about being a ‘pet parent’ including ‘cycling with your dog — do’s and don’ts’ and ‘how to prepare for a holiday with your dog.’

One wishes him well, of course. Although whether this will at last be the venture which allows him to step out of the shadow of his sister, a future queen, to be a captain of industry in his own right, remains to be seen.