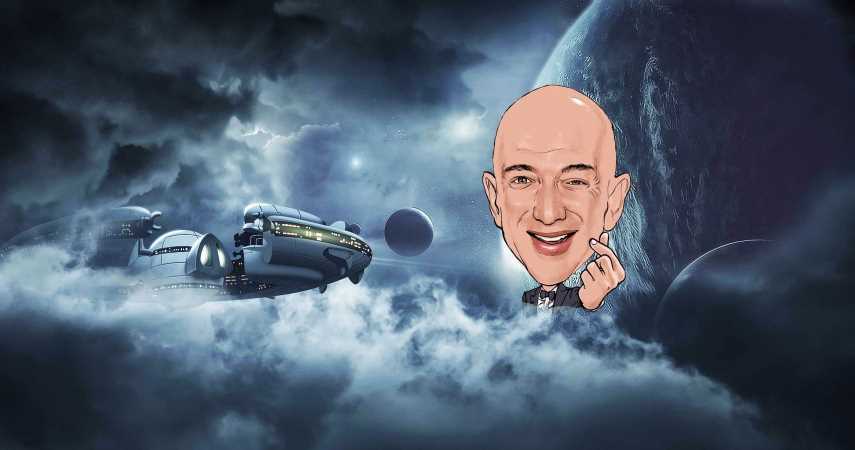 Billionaire Jeff Bezos is about to go out of this world… literally. The Amazon CEO is planning to take part in the first crewed flight on a rocket ship produced by his privately funded aerospace manufacturer, Blue Origin, TMZ reports. It’s going to be a family affair, however, as his younger brother, Mark Bezos, is also planning to join the space expedition.

Jeff made the announcement on his Instagram page, which boasts over 2.9 million followers. The billionaire shared a video clip of himself explaining his decision to take part in the risky journey. In the caption, he says going to space has been a dream of his since he was 5-years old. Since it was posted on Monday morning, the clip has been viewed over 350,000 times on the social media platform. It’s received over 2,000 comments and countless likes.

“I want to go on this flight because it’s the thing I’ve wanted to do all my life,” Jeff says in the video as old childhood photos flash on the screen. “It’s an adventure. It’s a big deal to me.”

The businessman went on to discuss his brother’s participation, saying it makes sense since he’s his “closest friend.” Mark, a firefighter, also spoke directly to the camera, saying he wasn’t expecting his brother to opt into the trip let alone ask him to be a part of it. In the video, footage shows Jess asking his brother to come alongside him to space, which receives an enthusiastic ‘yes.’

The video concludes by giving a date for the “first human flight.” It appears as though Jeff and his crew plan to go into space sooner than later, as they’re estimating they’ll leave Earth  next month on 07/20/2021. July 20th is a significant date, as it will mark the 52nd anniversary of the moon landing. It’ll be a brief journey, however, as reports suggest it will last approximately only 10-11 minutes. The rocket itself is only 59-feet long with 6 seats and is projected to go no higher than 60 miles above Earth.

Aside from his brother, it’s unclear who all will be joining Jeff on his journey into outer space. However, it’s been reported that one slot is being reserved for whoever bids the most at a charity auction. The funds, in turn, are directly going towards supporting the billion-dollar project. TMZ reports that the highest bid so far is going for almost $3 million.

CBC notes that Jeff is making plans to focus the majority of his time and energy on Blue Origin’s space tourism. On July 5th – a little over two weeks before the rocket launch – the businessman will officially step down as Amazon’s CEO. In the future, it’s expected that Blue Origin will begin selling tickets for short trips into space, though details have not been revealed.