JENNI MURRAY: ‘Why I feel so sorry for Britain’s brightest children’

Today thousands of young people are waking up wondering what their A-level results will be, and whether or not they will make it to the university and the course which will determine the rest of their lives.

Nothing could be more nerve-wracking, and this year it is all the more uncertain than ever before, partly because of chaos caused by the pandemic, but also because of what appears to be appallingly bad planning and sheer greed.

It’s a long time since I faced my own results day in 1968, but I remember as if it were yesterday how sick I felt as I waited for the letter to arrive. I had an offer to study French and drama at Hull University and needed two As and a B. I made the grades — and my future fell reassuringly into line. 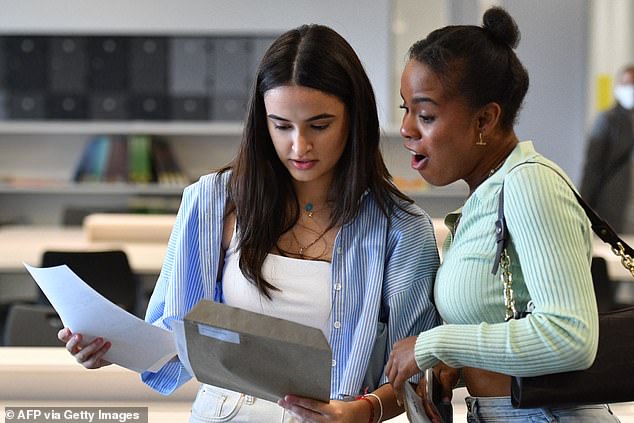 Today thousands of young people are waking up wondering what their A-level results will be, and whether or not they will make it to the university and the course which will determine the rest of their lives

I could trust absolutely that I would have a grant, no fees to pay and could become the first person in my family to go to university. My parents could not have been prouder. A daughter with BA after her name. A degree which would open doors to whatever career she chose. They believed it would set me up for life — as indeed it did.

This year, even for those who get good results, such certainty is far from assured. The number of potential students awaiting confirmation from universities has exceeded 250,000 for the first time, and this year also sees the highest ever number of candidates with no offers at all — 27,850 in total.

There has been a 5 per cent surge in applications to universities, some of which over-recruited during the pandemic and persuaded students to defer until this year.

In short, today’s admissions round will be the toughest in living memory. Too many students are fighting over too few places, and even those with predicted A* grades have received rejection after rejection. 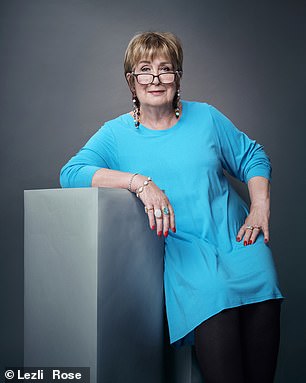 Jenni Murray (pictured) writes: ‘It’s a long time since I faced my own results day in 1968, but I remember as if it were yesterday how sick I felt…’

It’s simple greed that’s limiting the number of places for home students. They will have to pay the £9,250 per annum fees, but international students pay more than two and a half times that amount — an average of £24,000.

No wonder the best universities are keen to bring in foreign students and the numbers have soared. Some 54.3 per cent of students at University College London are recruited from abroad. At Warwick it’s less at 31.5 per cent, but it’s still blatantly unfair.

As Mark Corver, a former head of data at UCAS, said this week: ‘Selective universities have not recruited more UK students because they don’t pay as much as overseas students.’

Some may say that’s the way the market works. But surely our universities — which receive large sums of public money as well as all that cash the Government lends students — should aim to boost our society by nurturing the talents of our own brightest and best?

Why are they being allowed to treat British students as second rate, when surely they should prioritise those who will live and work here, pouring their skills back into our economy?

How can our leading centres of excellence think £9,250 a year is not enough — it’s crippling for ordinary families, but why worry about that when a much more comfortable amount will come in from China or Dubai? 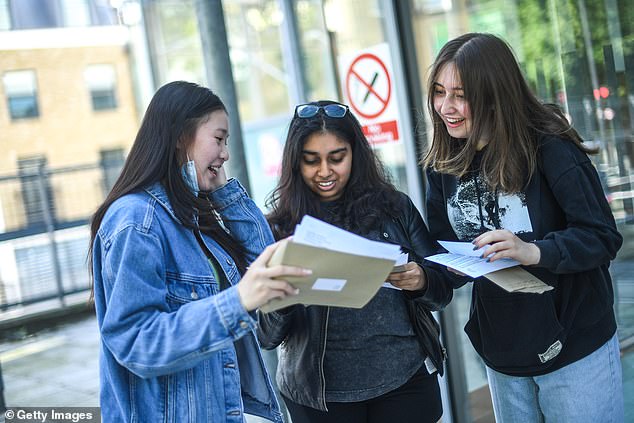 Jenni pens: ‘Education should be funded by, and available to, us all from the lowest to the highest…’

This model of funding, although it is similar to the grotesquely expensive U.S. system, is not the only way.

In Germany, universities are funded by the local government, with both domestic and international students offered courses for free. That may not be the way forward here — but surely we can find a model that puts UK students on an equal footing, at least, with those who come from overseas?

It’s a terrible betrayal of students who have worked hard throughout school and proved their merit, for universities to tell them there are just not enough places.

University is an essential part of the education system, which is the responsibility of our society, just as schools are.

University is not for everyone. It shouldn’t be a mark of class or wealth either. Instead, it’s an opportunity for those with a true academic leaning to think at the highest level. 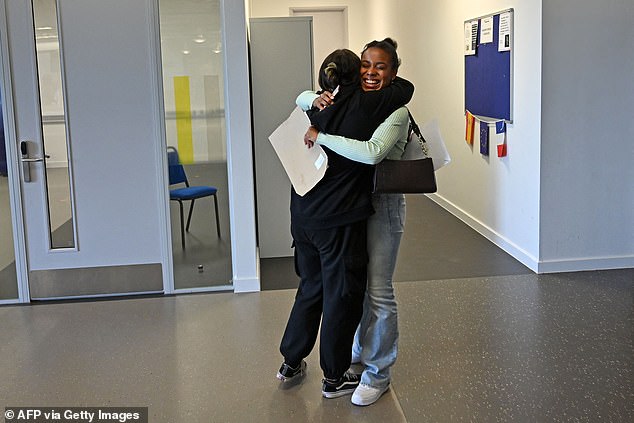 Jenni says: ‘In my view, there should be two questions asked before a university place is offered. Is the student good enough, and will their education benefit this country?’

I have no children anxiously awaiting results. That was all over years ago. I do, though, have a very bright Ukrainian boy who returned to his war-torn country to do his A-level equivalent exams. His results come out on August 29.

He’s hoping to return to England next week as a refugee. And if all goes well, he wants to go to university in this country to study law. It’s been agreed that refugees will pay the same fees as UK students, if they’re good enough.

In my view, there should be two questions asked before a university place is offered. Is the student good enough, and will their education benefit this country?

Ustym wants to study here and work here. Not a foreign student at all and so entitled, I hope, to a student loan.

I’m wishing for the best results and then a settled future for him. His past has been too unsettled for any young person to bear.

It’s not a talon contest, Cynthia 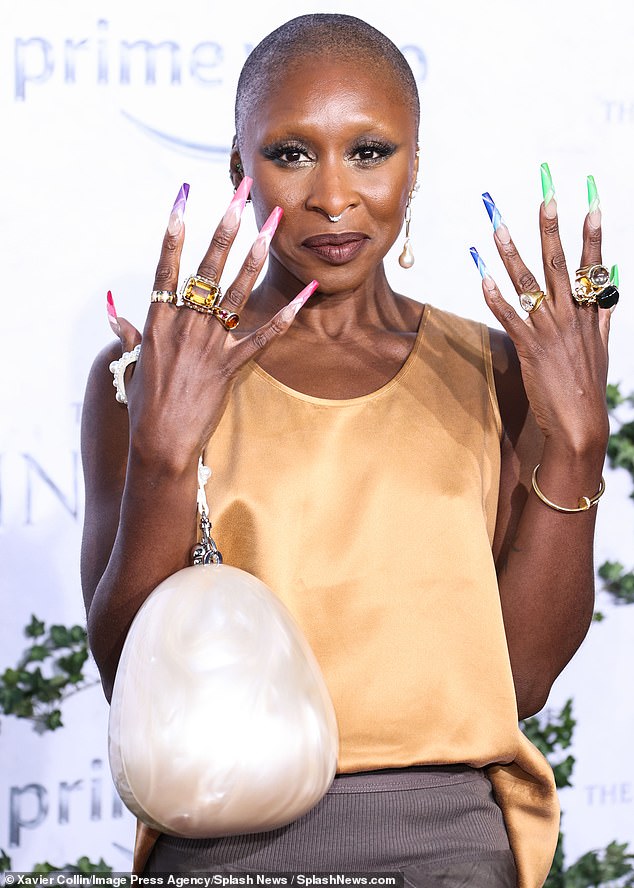 Jenni writes that she keeps her nails a ‘sensible length, unlike the actress and singer, Cynthia Erivo’ (pictured)

I’m lucky to have strong nails and I go to a nail bar every couple of weeks. No one asks what colour I want. They know it’s red.

I do keep them a sensible length, unlike the actress and singer, Cynthia Erivo, who appeared at The Lord Of The Rings: The Rings of Power premiere sporting what can only be described as claws. I wonder — how does she pull her knickers up?

I have never quite got used to the idea of calling my local chemist a pharmacist, but I couldn’t agree more strongly with Lord Grade that we must improve the NHS contract these small, independent businesses rely upon to stay afloat.

Some 650 of them have closed in the past six years and I would be devastated if mine were to shut.

When I go in, Hugh doesn’t need to ask my name as I’ve been with him so long.

Out comes my prescription and any over-the-counter items he knows I will need.

When I fell outside the next-door supermarket last year, he came to my rescue and hustled me into a chair in the store to clean up and disinfect my bloodied face.

A shopkeeper with time for a chat.

Ready with advice on anything you won’t bother the doctor with.

I urge a campaign to ‘Keep your local chemist’. They must not be lost.

They are part of your community.

Mega-bags will wreck my back 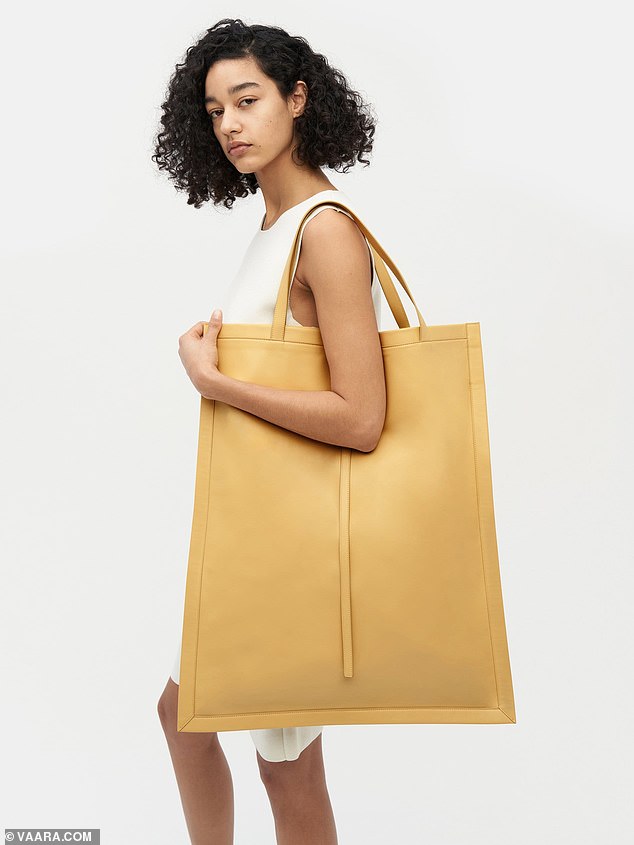 Jenni remarks: ‘The new mega-bags from designers such as Fendi and Alexander McQueen should carry a health warning: “This ridiculous fashion item will do you harm”

But I’ve no doubt it hasn’t helped my back even though I’ve changed it from shoulder to shoulder. The new mega-bags from designers such as Fendi and Alexander McQueen should carry a health warning: ‘This ridiculous fashion item will do you harm.’

17/08/2022 Lifestyle Comments Off on JENNI MURRAY: 'Why I feel so sorry for Britain's brightest children'
Lifestyle