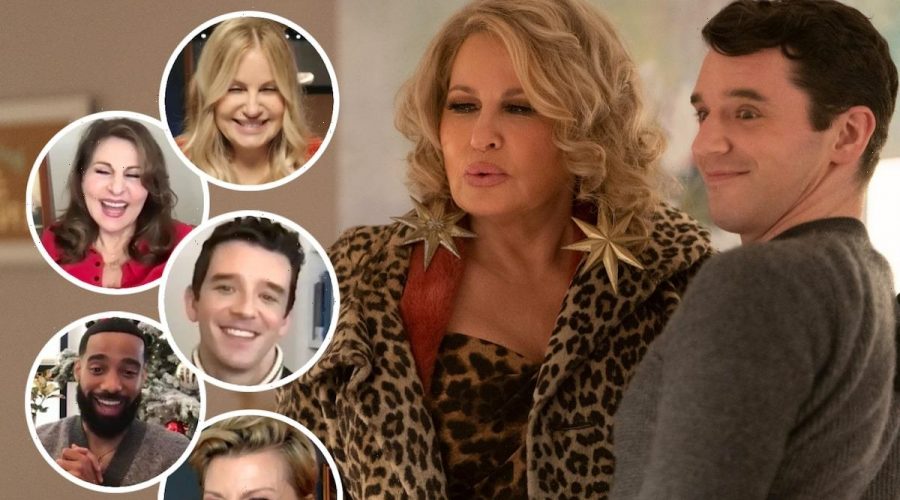 The stars of Single All the Way reflect on how the movie celebrates Britney Spears and the one and only Jennifer Coolidge.

In the new gay Netflix holiday romcom “Single All the Way,” Jennifer Coolidge’s character remarks that “the gays” are “always obsessed with me” — and a quick scan of Twitter proves that’s very much the case for Coolidge herself.

Celebrated for her recent stint on “The White Lotus,” Coolidge has been a gay icon for years, thanks in part to her camptastic work in Christopher Guest’s films like “Best In Show” and her scene stealing roles in “Legally Blonde” and “American Pie.”

But if you ask Coolidge herself why she’s so respected in the queer community, it all comes down to mutual respect. 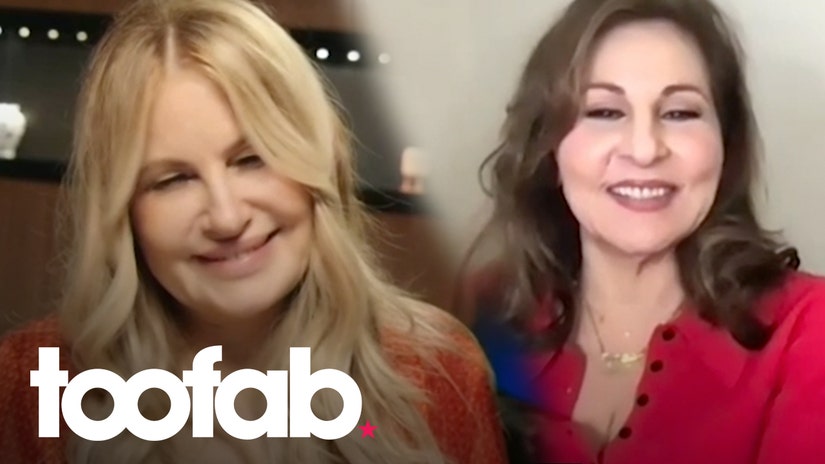 “I think it’s a very mutual thing,” she told TooFab during a junket for the film. “I think people like you back when you like them. It’s sort of always been an unconscious choice. When I was growing up like I was very unaware kid, I was sort of oblivious, but I just always gravitated toward gay men, gay women, like that was sort of my crowd.”

“It just makes a lot of sense that it sort of becomes a mutual thing,” she continued, adding, “I don’t know, you have the same taste.”

Costar Kathy Najimy — another actress the queer community loves thanks to her work in projects including “Hocus Pocus,” “Sister Act” and “Veronica’s Closet” — said she’s been an ally for the LGBTQIA community since her teen years, joking she’s “forced my way into the gay community, demanding that they liked me.” Comparing herself to Coolidge, she added that she believes both of them, “in a slight way” also “represent the outside circles,” endearing them to other possible outcasts.

“I think that she is among the pantheon of great female icons that the gays love” said costar Michael Urie, first crediting Coolidge’s “glamorous” persona. “She’s fearless, and she is constantly surprising. I mean, this is the thing about Jennifer Coolidge.” 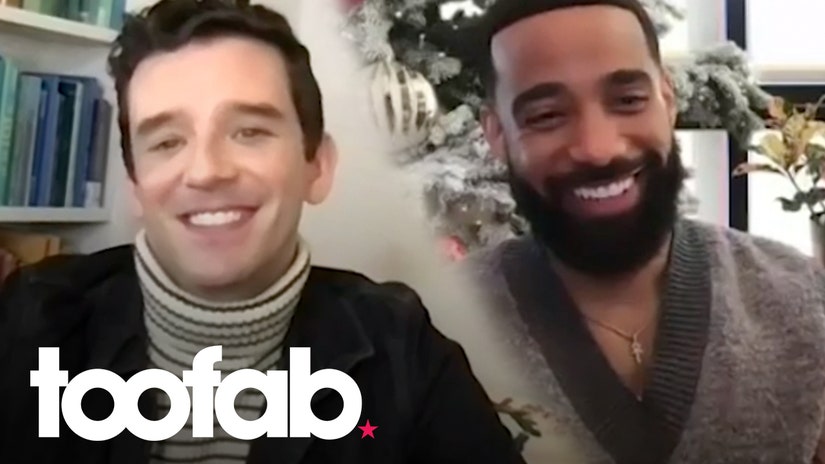 Coming from “someone who’s seen every movie she’s ever made,” Urie said he had an idea what Coolidge would bring to the project when she arrived on set, but was still surprised in the end.

Urie’s potential love interest in the film, Philemon Chambers, agreed with his sentiment — and said Coolidge is “so surprising each moment” she’s on set.

“When you see Jennifer Coolidge on film, you are like, ‘Oh my gosh, is she like that in real life?’ And it’s like, I mean, she’s not not like that,” he joked, adding that he feels she’s like a “shapeshifter” thanks to the “many different layers to her.” He also dropped a quick Coolidge impression — you’ll have to check it out in the video above.

For “Schitt’s Creek” alum Jennifer Robertson, she’s collecting Christopher Guest collaborators like Infinity Stones, working with Coolidge for the first time here after costarring with both Eugene Levy and Catherine O’Hara for years on the beloved Canadian comedy. 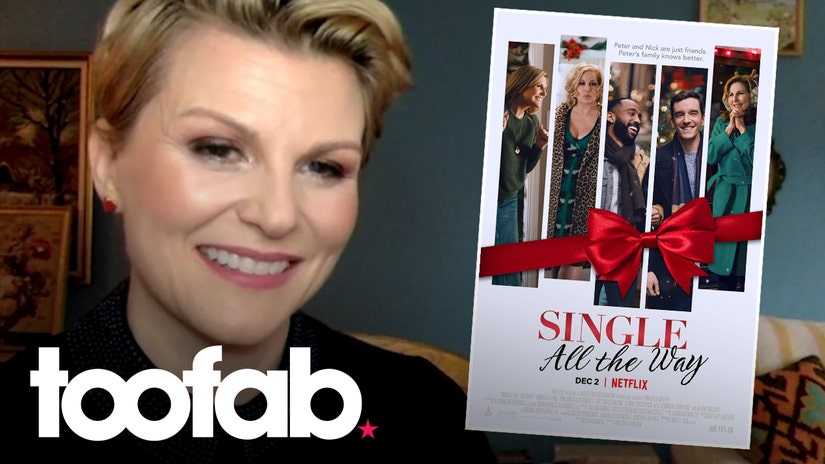 “Jennifer is phenomenal and I wish I was in all the scenes with Jennifer and Kathy too. God, they’re both so good. It’s very hard with Jennifer to not laugh,” she said. “Very, very challenging and very hard to not become an audience member and just watch, watch this beautiful comedy just sort of fall out of her.”

Calling Coolidge “so generous … kind and lovely,” Robertston revealed the first scene the two actually filmed together was actually the one in which she says the gays are obsessed with her. “It was such a great scene,” added Robertson. “She’s amazing, she’s a legend. It was so cool to be in her presence. She did a fair amount of improv that slayed all of us.”

Another beloved female performer who gets some much-deserved love in the film: Britney Spears. No spoilers here, but her underrated holiday song “My Only Wish (This Year)” is part of a pivotal scene in the film. It’s a bop — and one Urie was more than happy to not only sing along to, but perform a choreographed dance to in the movie.

“It’s so great that she’s free now and that we are giving her money, so happy about that,” he joked, celebrating Spears’ conservatorship coming to an end. “This song … it is it is under appreciated. I didn’t even really know it. I definitely heard it before but not played, it gets the short end of the stick when it comes to great pop Christmas music.”

“I’m so glad that we have it in the movie and it’s such a great moment, a great dance,” he added, “and especially now that she’s free and she’s about to be back and maybe maybe she’ll even be like doing something. Maybe she’ll perform!”

While we all cross our fingers for an eventual followup Christmas jam from Ms. Britney Jean, the stars of “Single All the Way” are already thinking about a sequel to their film — something that clearly isn’t out of the question if you look at all those “Princess Switch” movies.

“I would love a sequel because I think that there just needs to be more films like this,” said Chambers. “The fact that these characters, going on this journey and how sweet it is and how nice it is. I mean, of course, then you got Jennifer Coolidge, you got Katherine and Jimmy and Barry Bostwick, Michael Urie and me now, see?”

“There’s so many good characters in this movie. When it’s over you are, you are not satisfied. You want more, you want to see more combinations,” added Urie. “I need more! We need more seeds, we need more Coolidge, we need more than Najimy, there’s so much, there are so many opportunities for stories and characters. So yeah, let’s do more.”

But Robertson may have the best pitch of them all.

“Michael and I have already talked about it. We would love a sequel and a three-quel and a four-quel. Um, we go to Hawaii — I’m just gonna pick places I want to go,” joked Robertston. “Um, the family goes to Hawaii, there’s a wedding. Obviously. We need the wedding episode, we need … I don’t know … we need them going, maybe like an X-Men. Maybe we become the new X-men.”

“Single All the Way” hits Netflix on December 2.