Despite Joker's uncomfortable publicity campaign that saw fan favour turn against director Todd Phillips and the film's violent themes, audiences have flocked to see Joaquin Phoenix as the latest incarnation of Batman's arch-nemesis. 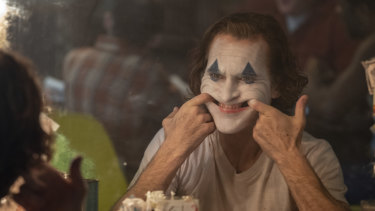 Joaquin Phoenix’s Joker has killed at the box office.Credit:Warner Bros

In the US, the film – made on a modest comic film budget of $US55 million ($81 million) – grossed an estimated $US93.5 million ($138.5 mill) in tickets sales across 4374 screens to set a record October opening; besting previous record-holder Venom, which opened to $US80 million last year.

In Australia, the film had a similarly strong start earning $9.75 million across 556 screens nationally since Thursday, a Roadshow spokesperson confirmed. The Joker usurped Ride Like a Girl as number one atop the Australian box office, yet its opening trailed blockbuster showings from the year's leaders; Avengers: Endgame ($34.1 million) and The Lion King ($20.5 million).

Joker's box office success came after weeks of uneasiness leading up to its release. Its Golden Lion-winning debut at the Venice Film Festival last month was underscored by divisive reviews – with some critics having praised its timely depiction of modern alienation, while others decried its sympathetic nod towards "incel" culture and white male violence in the film.

Responding to anxieties that the film could inspire violence, multiple theatre chains in the US banned costumes at screenings while authorities in numerous cities said they were stepping up police patrols around theatres. Some relatives of the 2012 Aurora movie theatre shooting even asked Warner Bros to commit to gun control causes – the studio said it always has, and publicly denied the film was "an endorsement of real-world violence of any kind".

In a raucous publicity trail, Phillips – to date best known as the director behind The Hangover franchise – chastised the outrage around the film, telling one publication "the far left can sound like the far right when it suits their agenda". In another interview before the film's release, he criticised "woke culture" for ruining comedy and suggested Joker was his attempt to make "something irreverent" outside the comedic sphere.

While some worried this would all impact poorly on Joker's box office, it has not. Senior analyst for US box office tracker Comscore, Paul Dergarabedian, told the Associated Press that the convergence of critical acclaim and controversy actually helped the film become bigger than expected at the box office.