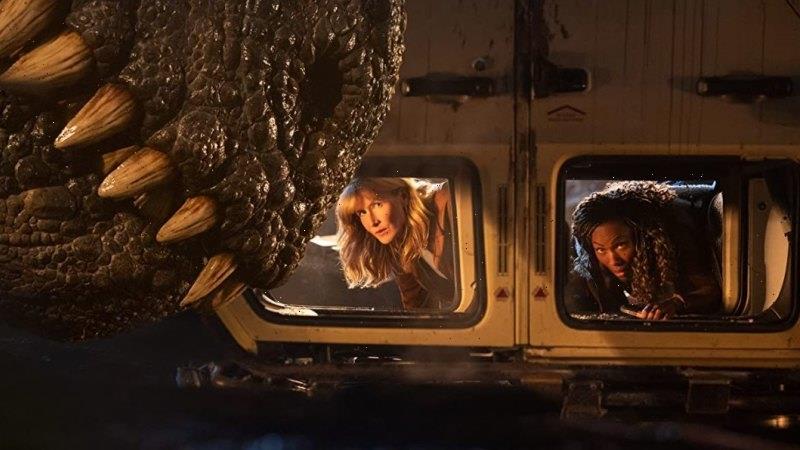 A lot has happened since the last Jurassic World movie was released four years ago. Dinosaurs have now been free to roam the planet for so long that human beings are reluctantly concluding they may have to coexist.

The problem is that the dinosaurs themselves don’t really understand about sharing. They tend to pop up everywhere, gulping down fishermen’s catches, nets, hooks and all, breeding offspring that like to chase small children, and indulging in fast food by snatching up passing pedestrians. 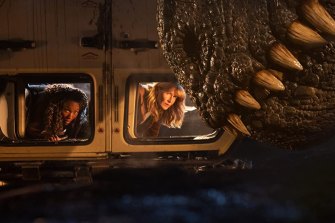 The dinosaurs, as ever, are the stars in this latest entry in the Jurassic franchise. A Giganotosaurus terrorises Kayla Watts (DeWanda Wise) and Dr Ellie Sattler (Laura Dern) in Jurassic World Dominion.Credit:Universal Pictures and Amblin Entertainment

To be fair, unscrupulous human beings are responding in kind by trapping the more manageable breeds and selling them at underground markets where dinosaur sausage sizzles are also on the menu.

And at the high end of the trade, there is the biotech company Biosyn, which is holding dinosaurs in its “sanctuary” somewhere in the Dolomites so it can experiment with their DNA in the hope of making a fortune from using it to manufacture agricultural pesticides and cures for all variety of diseases.

The film’s own DNA has its roots in Michael Crichton’s books, Jurassic Park and Jurassic World, which have proved to be the gifts that keep on giving. This is the sixth film in the franchise and fans seem as besotted as ever. 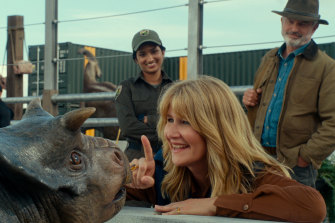 For months, they feverishly speculated about the make-up of the dino cast. How many species would appear? How, precisely, they would be horned, fanged and feathered? And which would play the leads rather than being relegated to cameo roles?

Yes, it’s all about the dinosaurs. The human players are regarded only as supporting cast yet there are plenty of familiar faces. Sam Neill, Laura Dern and Jeff Goldblum are together for the first time since the original in 1993, while Chris Pratt is back as raptor whisperer Owen Grady, who’s still working with Bryce Dallas Howard’s Claire Dearing in her fraught attempt to stand up for dinosaur rights.

When the action begins, these two are in the Sierra Nevadas, looking as if they’re in a wintry pastiche of a John Ford Western. Instead of herding buffaloes, Grady is happily wrangling Parasaurolophus while Claire is doing her best to parent Maisie (Isabella Sermon), the child cloned from the DNA of Charlotte Lockwood, daughter of Jurassic Park’s co-founder. Maisie’s undergoing an adolescent identity crisis. She’s also being hunted by Biosyn’s boss, Lewis Dodgson (a deceptively mild-mannered Campbell Scott), who wants to analyse and exploit her DNA.

As you can tell, a lot of exposition is required to bring us up to speed and create a reason for bringing the human leads together in the Dolomites, where the rampaging climax is to take place. But director Colin Trevorrow, a Jurassic veteran, and co-writer Emily Carmichael make action-packed work of it. 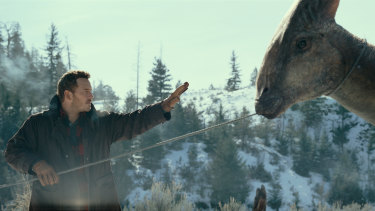 The DNA of Jurassic Park’s creator Steven Spielberg is discernible in a series of stunts that could have been plucked from an Indiana Jones movie. Malta’s capital Valletta lends its winding streets to a chase sequence that has Grady and his motorbike trying to outrun a couple of doggedly determined Dilophosaurus and the city’s cellars prove a good choice as the setting for the inventively sleazy dinosaur market scene. Trevorrow also finds time to cut away to the wheatfields of West Texas, which are being convincingly ravaged by a genetically engineered plague of outsize locusts.

In the Dolomites, we’re reunited with Goldblum’s Dr Ian Malcolm, whose specialty – chaos theory – means his consulting skills are in high demand. He’s still dispensing bleak jokes about the human race’s imminent end and by that stage, I was wishing he had arrived earlier.

There’s not nearly enough humour to offset the basic loopiness of the plot and although Neill and Dern make an engaging pair as they consider reigniting the romantic friendship they once enjoyed, thought soon becomes a luxury they can’t afford.

The ending is a fiendishly choreographed battle for survival that successfully suspends all your critical faculties, ending the franchise on a giddy high – if it is the end. I suspect not. Where movie dinosaurs are concerned, never say die.

Jurassic World Dominion is in cinemas from June 9.

A cultural guide to going out and loving your city. Sign up to our Culture Fix newsletter here.