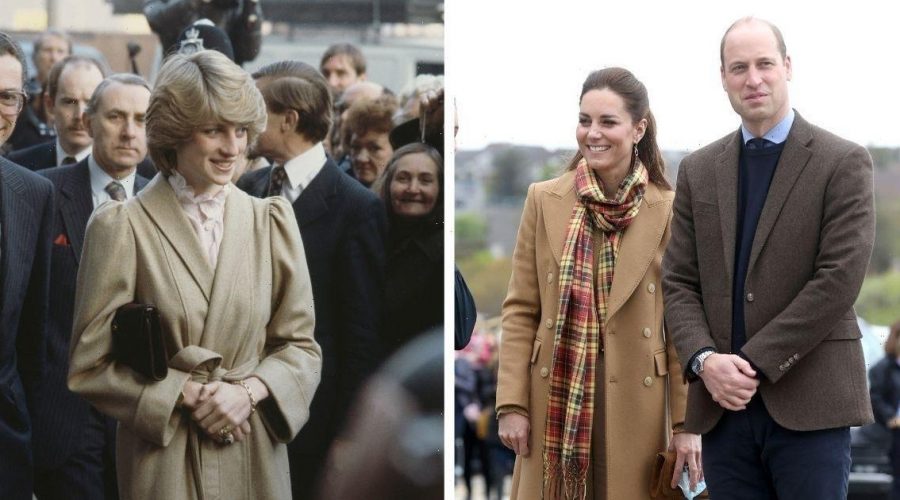 Join the Club! Get all the gossip on fashion and beauty and never miss out on top stories again

Whenever Kate Middleton makes an appearance our fashion radars start to activate as this is one lady who never fails to disappoint us with her effortless style.

Thankfully with lockdown restrictions lifting, we are able to see The Duchess venture out more to public appearance and naturally, we’ve been obsessed with each and every outfit so far.

This week Kate joined Prince William as the couple embarked on their royal tour of Scotland and made a bold start on Monday in a vivid blue ensemble.

However, on Tuesday, the pair paid a visit to Orkney's new hospital, The Balfour and of course, Kate looked as flawless as always.

Kate previously wore the stunning coat during an appearance at the Ely and Careau Children’s Centre in Cardiff, Wales in January.

Underneath the tailored coat, Kate opted for a very on-trend pair or camel Max Mara wide-leg trousers and a matching knit.

The chic outfit was finished off with a traditional tartan pattern scarf to pay homage to the city which she originally wore in 2013.

Following on from her close resembling outfit to Princess Diana during Monday’s appearance, we also saw another tribute to her late mother-in-law with Tuesday’s look.

Diana is known to be one of, if not the most stylish of The Royal Family even after her death, however, when we look back at her style Diana was a fan of beige tones.

Back in 1982 when Diana attended an appearance at Wandsworth DHSS office sporting a wonderful beige trench coat by designer Caroline Charles.

Just like Diana, we can see how much Kate is also a lover of re-wearing her favourite wardrobe items.

For her first appearance on the tour, Kate sported a bold royal blue blazer from high street brand Zara, which we have seen her sport during an appearance on the International Day of the Midwife at the start of May.

The military-style blazer was paired with a colour-matching pleated skirt from high street brand Hope.

Whilst we were in awe of the super stylish outfit, we were left with a striking flashback of a time in which Princess Diana wore a very similar outfit back in September 1992.

There is no denying that both of these women are two of the best Royal fashion influencers so we can’t wait to see what else Kate wears as the tour continues this week.