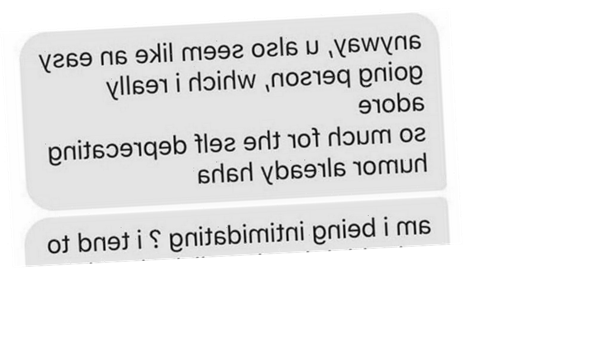 A woman wasn’t impressed when a male admirer tried to chat her up over text.

In the cringe-worthy exchange shared online by Bristol-based Rachel, he boasted about his “high level of English”.

But instead of putting this talent into practice, he sent her messages that were littered with errors.

He wrote: "Anyway, u also seem like an easy-going person, which I really adore. So much for the self-deprecating humour already haha.

"Am I being intimidating? I tend to write high level english already upfront.

“But don't worry u can rest assured that I don't intens to overhem. I in fact trying to impress u." If the multiple spelling errors weren’t off-putting enough, the blundering bloke went on to compliment the recipient’s “wide pelvis bone”.

He was even audacious enough to suggest it would come in handy if they had children.

The unnamed man added: "U also hav a wide pelvis bone, which make u look fertile and procreation-ready, thus more feminine and attractive.

“Say like a woman that deserves to grow my seeds.

"Thre real question now: Will u nurse my seeds and grow them?"

Far from wanting to start a family with the guy, the woman appeared to leave him on read.

When Rachel stumbled across the text exchange online, she took to Twitter to mock his attempt at flirting.

She wrote: “Someone needs to work on his spelling, grammar and chat up lines.”

The post garnered more than 960 likes – and many were equally freaked out by his flirting technique.

One responder wrote: “Wide pelvis bone? F*** me, I thought I’d heard every chat up line by now. I was mistaken.”

And a third joked: “Wide pelvis eh? How can you resist such compliments?