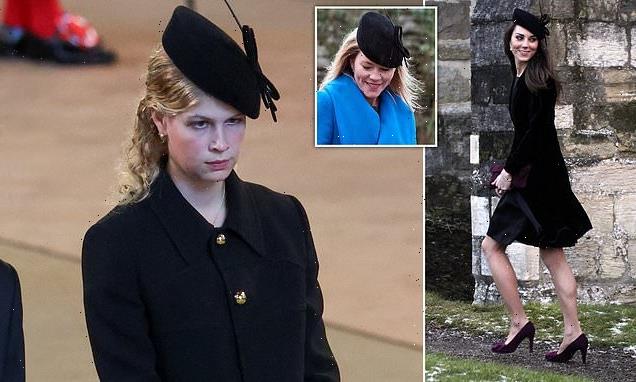 Taking inspiration from Kate? Lady Louise Windsor, 18, wore a black fascinator previously seen on the Princess of Wales and Autumn Phillips for the Queen’s service

Lady Louise Windsor took some fashion inspiration from her cousin’s wife yesterday – as she donned  a black fascinator previously worn by the Princess of Wales for the ceremony at Westminster Hall.

Prince Edward and Sophie Wessex’s daughter, 18, donned a stylish pillbox hat with an intricate fascinator from hatter Whiteley Hats yesterday as the family accompanied the Queen’s coffin to the former heart of Parliament, where she will lay in state until her funeral on Monday.

But while she was wearing it for the first time, the hat has been beloved by other women of the royal family in recent years.

Kate Middleton wore it once before she married Prince William, at a friend’s wedding in January 2011, and then during an engagement at Baker Street with the Queen in 2013. 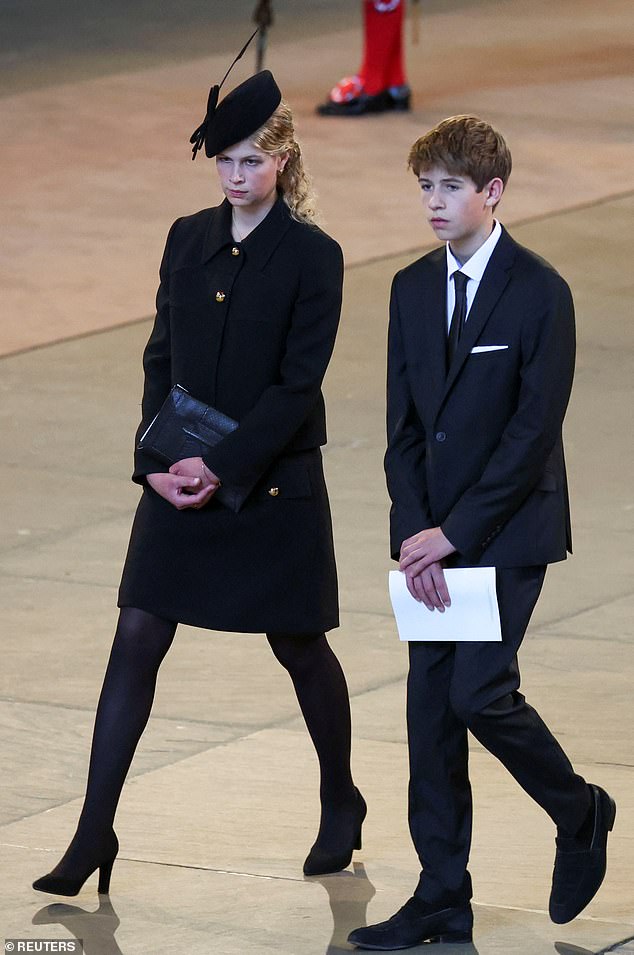 Kate Middleton first donned it to the wedding of Harry Aubrey-Fletcher and Sarah Louise Stourton in January 2011 in Aldborough (left). Peter Philips’ ex-wife Autumn has also previously worn the fascinator (pictured right, in 2019)

Lady Louise looked deep in thought as she attended yesterday’s emotional service for Her Majesty at Westminster Hall.

Her blonde locks were neatly tucked under the hat, which was adorned with a long black feathery fascinator and three black bows.

The young royal, who enjoyed a close relationship to the Queen, wore the hat with a black coat dress with golden buttons.

Her accessories seemed to have been provided by her cousin William’s wife Kate, who has worn it twice in the past.

Kate first donned it to the wedding of Harry Aubrey-Fletcher and Sarah Louise Stourton in January 2011 in Aldborough, where she paired it with a style black dress with a short hem.

Her own wedding to Prince William was then only a few months away.

Kate, who is known to recycle her wardrobe, later wore the pillbox hat for a second time in 2013.

She sported it as she accompanied the Queen to Baker Street Station, this time pairing it with a stylish blue dress.

Six years later, it was Peter Phillips’ ex-wife’s turn to wear the Whiteley number. She wore the fascinator for Lena Tindall’s christening at St Nicholas Church in Cherington. 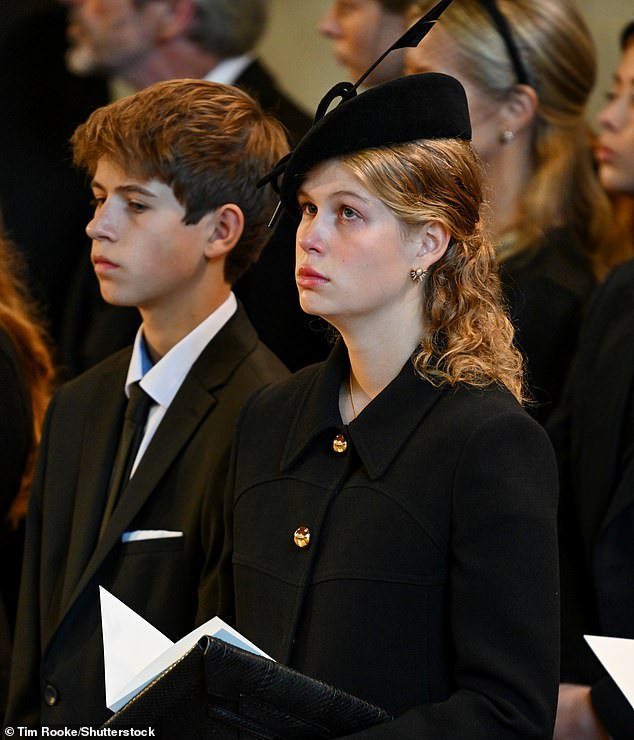 Louise, who seemed upset on Wednesday, could take comfort that she was wearing a little piece of Kate with her

The daughter of the Earl and Countess of Wessex enjoyed a close relationship with her grandmother the Queen and grew up just a stone’s throw from the late monarch’s home of Windsor Castle, in Bagshot Park.

During the occasion today, Louise performed a curtsy when stepping forward to say goodbye to her grandmother, alongside her 14-year-old brother.

During the walkabout at Balmoral on Saturday, Louise, who has previously been described as Her Majesty’s ‘favourite’ grandchild and a ‘secret weapon’ for the Firm, spent around 10 minutes reading the tributes and admiring the flowers with her parents, before they returned inside Balmoral Castle. 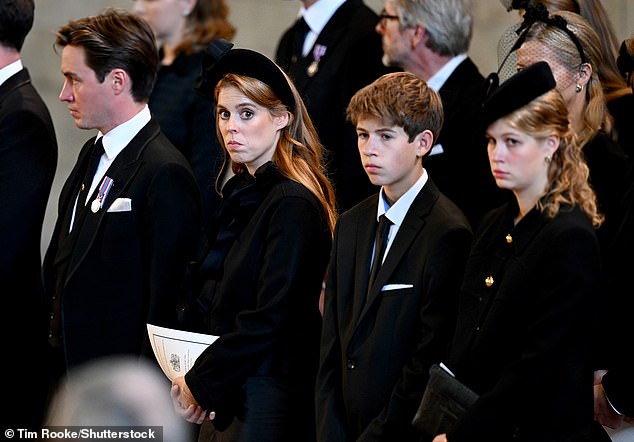 Lady Louise was standing close to her brother, James, Viscount Severn, and her cousin Princess Beatrice and her husband Edo Mapelli Mozzi 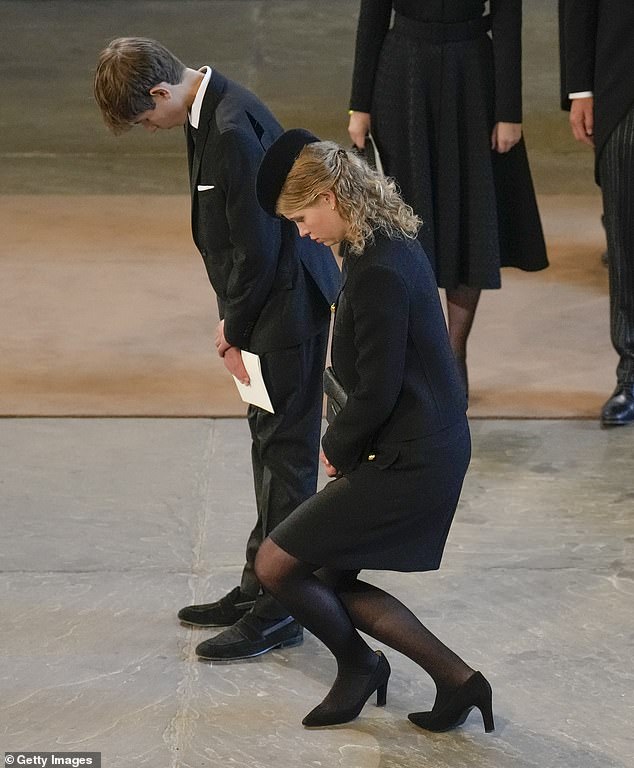 James, Viscount Severn and Lady Louise Windsor pay their respects in The Palace of Westminster after the procession for the Lying-in State of the Queen

Over the last two years, Lady Louise has taken on an increasingly public role as her parents Prince Edward and the Countess of Wessex have been bumped up the royal food chain following the disgrace of Prince Andrew and the departure of the Duke and Duchess of Sussex.

She was front and centre in the Platinum Jubilee celebrations, joined her parents at the Commonwealth Games and made her successful TV debut in a documentary about her beloved grandfather the Duke of Edinburgh.

Unlike her older cousins, Princes William and Harry, Louise was able to see a lot more of her grandparents growing up because she has always lived just 11 miles from Windsor and had the benefit of being born around the time the Queen and Prince Philip scaled back their long-haul travel.