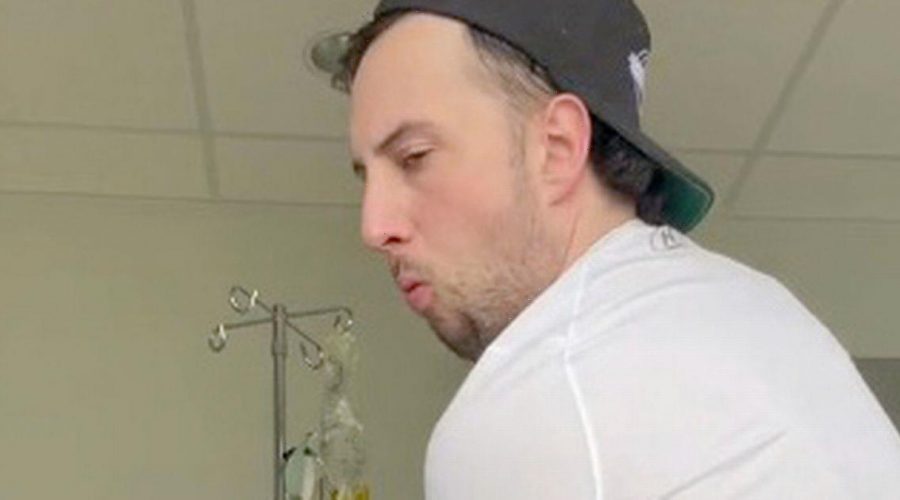 Giving birth is no easy task for a woman – but this bloke acted like it was difficult for him.

Danielle Foord filmed the moment she gave birth in hospital so should look back on the special day.

However, the baby being born was not the centre of attention in the intimate clip.

Her husband’s dramatic reaction has quickly become the focal point of the birth after being posted onto TikTok.

Despite holding her hand for support, the chap couldn’t handle the ins and outs of child birth – so much so, he needed to ‘take a break’.

In the clip, which has racked up a huge 41 million views, Danielle laid on the bed as she attempted to push out her baby daughter.

At first, her husband was squeezing onto her hand while she did all the hard work.

But it wasn’t long until he started gagging.

Visibly in pain, Danielle continued to push as her husband gagged while he still gripped on tight to her hand.

However, it appeared to get all too much for the hubby as he flopped down onto the bedside chair to have a breather.

Danielle explained: “Not my husband gagging as I’m pushing out our daughter…then sits down at the end as if he needs a break.

Feeling sorry for the new dad, many people fled to the comments to praise him for supporting Danielle despite his consistent gagging throughout.

One person commented: “Mans out here fighting for his life.”

Another user added: “Poor guy. Looks like he was trying his best not to faint at the end. some people don't do well around blood.”

While a third person giggled: “She’s creating life and killing one simultaneously, impressive.”

Someone else mocked: “Dudes full on going through labour in his own way.”

Meanwhile, a fifth person voiced: “Omg he is trying so hard to stay with you! He's a keeper and gave it his all! Gold medal!!”

Despite many people praising the hubby and relating to his struggle, others were not too kind.

One person slammed: "So sorry he had to make that moment about him."

A second blasted: "Men need to grow up, did he think you were pushing flowers."

And, this user jibed: "The fact that he’s so out of touch with human nature is so concerning. I’m sorry but this seems like a boy, not a man."

However, Danielle defended her husband and his response to her giving brith.

“Don’t know why people are hating so much, he was the best support that day and we both laugh watching this video back!”