As The Chase celebrates its 10th anniversary, show reveals the stars who smashed the Cash Builder round by answering at least 10 questions in a MINUTE – but could YOU do better?

We’re all guilty of sitting on our sofas and shouting answers at the TV when The Chase is on – but could you do as well as these celebrities did?

The British ITV programme is a firm favourite with families across the globe, raking in millions of viewers each episode as the Chasers face off against contestants.

A new quiz book, released to celebrate the show’s 10th anniversary, highlights the ten celebrities with the most know-how, after playing in the spin-off The Celebrity Chase for charity.

The stars all scored a tremendous 10 in their Cash Builder rounds, which sees them have one minute to answer as many questions from presenter Bradley Walsh as they can – with each one earning them £1,000.

But are you as clever as these well-known faces? Put your general knowledge to the test and see if you can out-do the stars, including Jonathan Ross, Matthew Wright and Jessica Taylor… 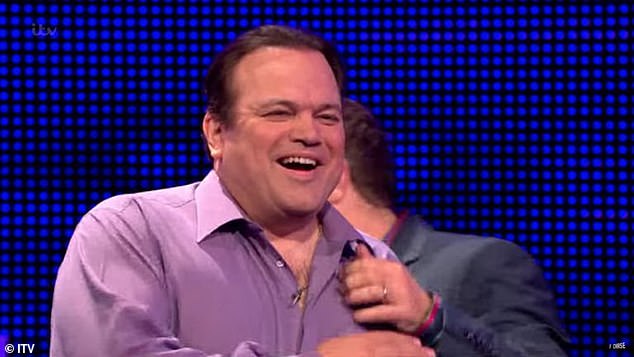 He’s best known for playing dopey Barry Evans in EastEnders, but Shaun Williamson (pictured on the programme) proved he’s much sharper than his former character when appearing on The Chase

He’s best known for playing dopey Barry Evans in EastEnders, but Shaun Williamson proved he’s much sharper than his on-screen persona when appearing on The Chase.

1. Who composed the stage musical Cats?

HOW DOES THE CHASE WORK?

The Chase is one of the most popular quiz shows on TV – but how do you beat The Chaser?

A team of four players each takes it in turns to win some money in a quick fire round, but will join together in the final chase to take the money home.

In between those rounds they face The Chaser, and if they get more questions wrong than the professional quizzer they’re out.

If they pass through that round their money is added to the bank with the remaining players’ money.

In the final chase the team has two minutes to answer as many questions as possible, but if The Chaser gets more points they will go home empty handed.

2. What is the shiny, colourful lining inside an oyster shell called?

3. Tafari Makonnen took what title as Emperor of Ethiopia?

4. The American company Baskin-Robbins is famed for its 31 flanours of what food?

5. Theophilus P. Wildebeeste was an alter ego of which TV comedian

6. The flugelhorn belongs to what family of musical instruments?

7. In 2011, Delia Smith left her post as catering manager of what football club?

9. Helen Mirren played Morgana in what film about King Arthur?

10. What word of German origin was used for the bombing of London in World War Two?

Proving he really did have the Wright Stuff, British TV presenter Matthew Wright was another celebrity to score ten in the first round of the show.

1. The pub snack ‘scratchings’ is made from the skin of what animal?

2. Anne Bancroft played what character in The Graduate?

3. Which pop superstar headlined the half-time show at the 2012 Super Bowl?

4. What South American country claims sovereignty over the Falklands?

5. What sport was once described by Robin Williams as ‘baseball on valium’?

7. What airport was mentioned by Lorraine Chase in a ’70s TV advert for Campari?

8. From 2013, what awards ceremony will take place at the Dolby Theatre?

10. The only meat a kangatarian chooses to eat comes from what animal? 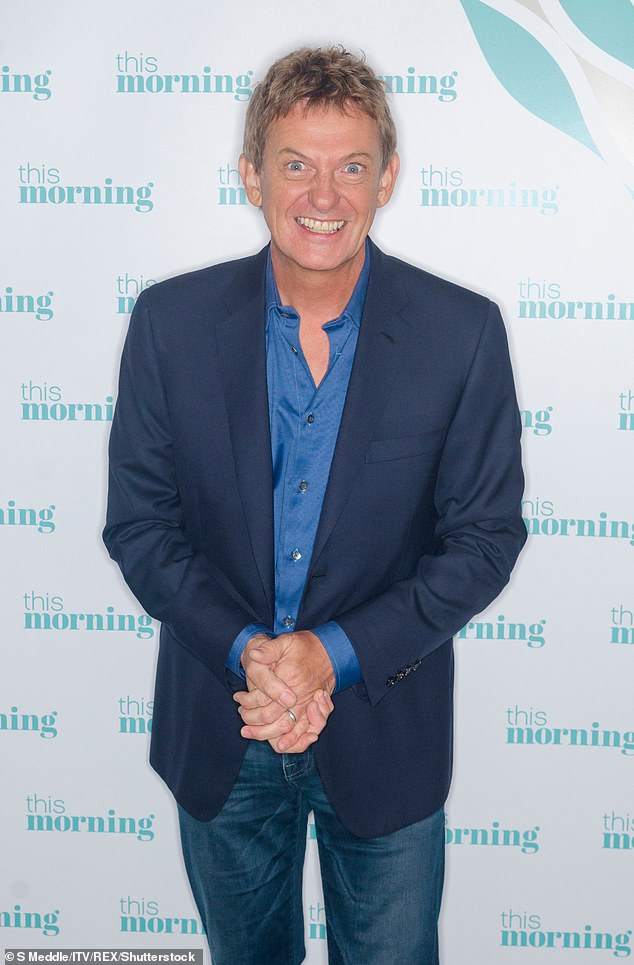 Proving he really did have the Wright Stuff, British TV presenter Matthew Wright (pictured) was another celebrity to score ten in the first round of the show

Newscaster Alastair Stewart has appeared on The Celebrity Chase twice, both in 2013, as he took to the stage during the Text Santa charity special as well as the standard show.

He scored ten the first time before facing Anne The Governess in his Head to Head round.

1. Tartan Day is a celebration of the heritage of what country of the UK?

2. The kissing party game played by teenagers is called ‘spin the…’ what?

3. In 2013, David Dinsmore became editor of what tabloid newspaper?

4. What trees feature in the name of one of the five classic horse races?

5. In Doctor Who, what does the letter ‘T’ stand for in TARDIS?

6. The astronomer Sosigenes was the advisor of which Roman leader?

7. Strictly Ann is an autobiography by which former Conservative MP?

9. Winnie the Pooh was indirectly named after which Canadian city?

10. Which of Prince Charles’ parents was playing squash when he was born? 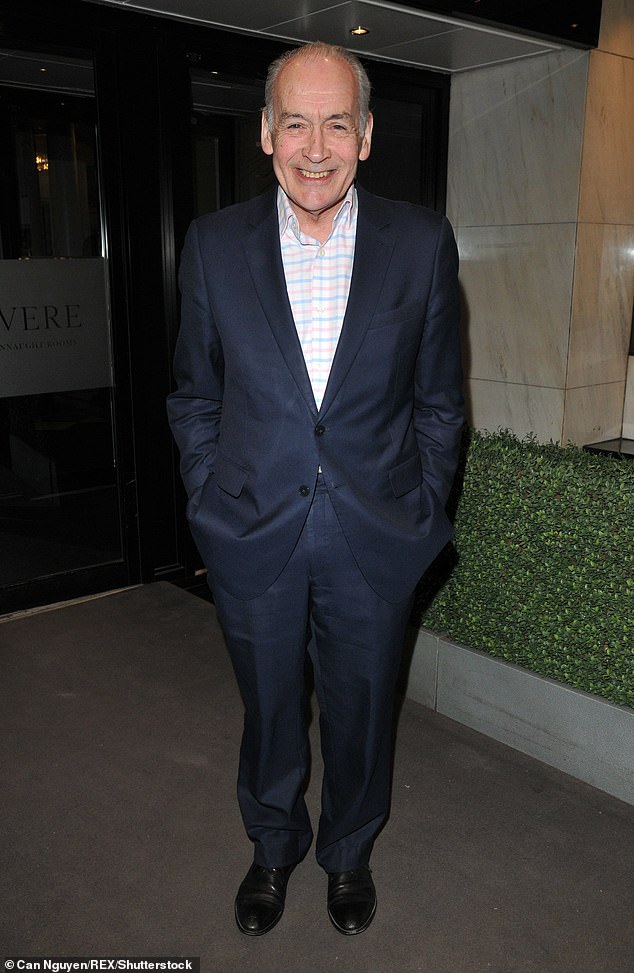 Newscaster Alastair Stewart (above) has appeared on The Celebrity Chase twice, both in 2013

TV presenter Keith Chegwin faced the Chasers alongside newscaster Alastair Stewart and went home with a pot of £29,000 to split between four charities.

1. What popular board game allows a maximum of 32 houses and 12 hotels?

2. Treacle, custard and Bakewell are types of what open pastry case dessert?

3. In what ’90s film did Arnold Schwarzenegger play a spy called Harry Tasker?

4. Who succeeded John Curry as Olympic skating champion in 1980?

5. The name of what optical instrument comes from the Greek for ‘far-seeing’?

7. In 1945, Clement Attlee replaced Winston Churchill in what political office?

8. The actor Lee Marvin got to Number One in the UK with what song?

9. Soft and sustain are names used to describe what parts of a grand piano?

10. Maritime Law deals with navigation and commerce that takes place where? 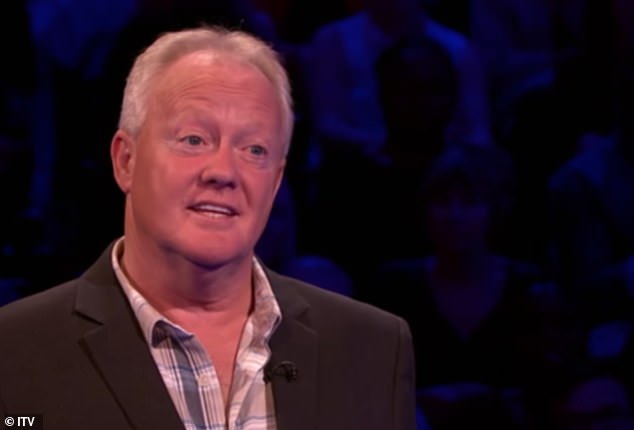 TV presenter Keith Chegwin (pictured) faced the Chasers alongside newscaster Alastair Stewart and went home with a pot of £29,000 to split between four charities

Liberty X singer Jessica Taylor appeared on the celebrity edition of The Chase in November 2013.

She faced off against The Beast Mark Labbett, taking the high offer of £75,000 in her individual chase – a gamble that paid off.

1. In the novel Treasure Island, Long John Silver has how many legs?

2. In cricket, which fielder must remain directly behind the stumps as the ball is bowled?

3. Inspector Javert is a character in what stage and film musical?

4. What old term for any meat caught in a hunt is now only used for the meat of the deer?

5. What animated children’s TV show is set in the town of Pontypandy?

6. What sign of the zodiac has the longest name?

7. In what film does Richard Gere literally sweep Debra Winger off her feet?

8. In what human organ would you find nerve-cell groups called basal ganglia?

10. What precious gem gets its name from the Greek word for ‘invincible’? 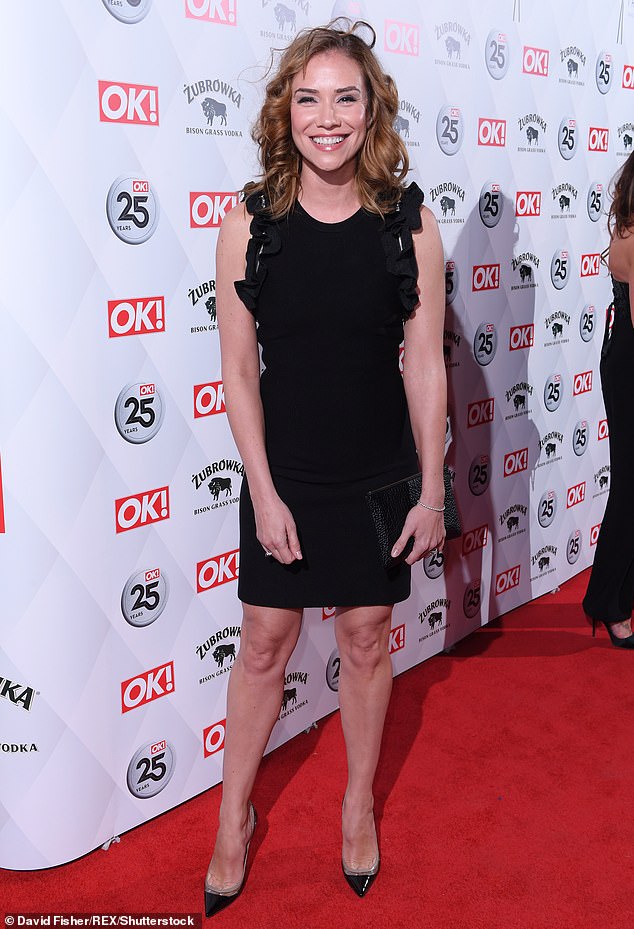 Comedian Rory McGrath was on the same team as Jessica Taylor and the pair were certainly a dream combination.

Rory also had a stormer in his cash builder round, but despite his ten answers, took the low offer of £3,000 from Chaser Mark Labbett. An odd decision, but he made it home.

1. In ‘Sing a Song of Sixpence’, how many blackbirds were baked in the pie?

2. The original Ashes Trophy is usually kept at what cricket ground?

3. ‘Jo-Jo left his home in Tucson Arizona’ in what Beatles song?

4. Which French explorer popularised scuba diving in his book The Silent World?

5. The port of Mahon is thought to have lent its name to what creamy dressing?

6. The Gulf of Aqaba is part of what sea?

7. What was discovered in Bonanza Creek in the Yukon in 1896?

8. Who starred as Will Turner in the Pirates of the Caribbean films?

9. Which British scientist received the first Albert Einstein Medal in 1979?

10. Which 18th century French queen was often referred to as ‘the baker’s wife’? 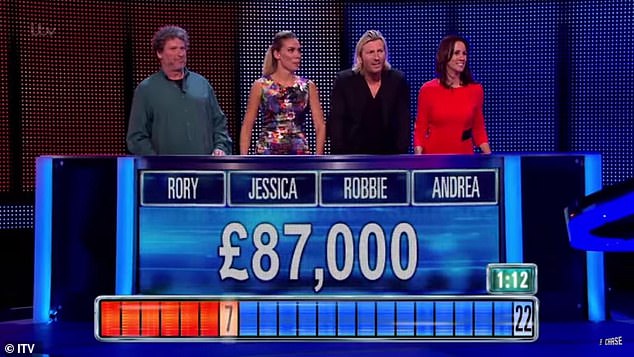 Rory, pictured far left beside Jessica, also had a stormer in his cash builder round, but despite his ten answers, took the low offer of £3,000 from Chaser Mark Labbett

Jonathan Ross proved he’s the master of quiz shows as well as chat shows when he scored 10 in his cash builder round. He was then offered a high offer of £66,000 by Shaun Wallace, which he accepted.

Thankfully he made it home and he and his team mates managed to win a stonking £120,000 for their chosen charities in 2018.

1. In the title of novels, what number links Men In A Boat and Musketeers?

2. In the US, Bazooka Joe is the mascot of what kind of confectionery?

3. Benedict Cumberbatch won a 2014 Emmy for his role in what series?

4. Who was the last monarch before the Queen to celebrate a diamond jubilee?

6. Who starred as inventor Cade Yeager in the film Transformers: Age of Extinction?

7. What religious ritual is designed to expel bad spirits from the living?

8. Which Eurovision winner modelled for Jean Paul Gaultier in 2014?

9. The name of what Japanese comics means ‘aimless pictures’?

10. What country’s capital city is Reykjavik? 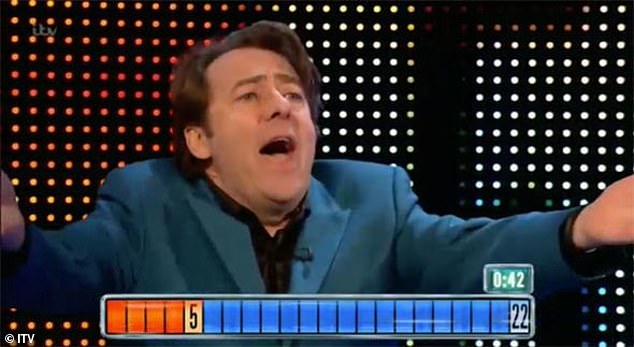 The League of Gentlemen actor proved to well and truly be in a league of his own with his impressive performance in the cash builder.

Steve scored 10 in the Christmas special in 2014 and faced Mark Labbett in his head to head, where he brought back the high offer of £50,000 to the team.

1. Which character says to Little Red Riding Hood ‘All the better to see you with’?

4. Who is the only man to have been married to a British Prime Minister?

5. Meaning ‘spirit of the times’, the word ‘zeitgeist’ is from what European language?

6. The musical The Book of Mormon was written by the creators of what TV show?

7. When it first opened, what motorway ran from Watford to Crick?

9. What South African mountain is flanked by the Lion’s Head and the Devil’s Peak?

10. One Leg Too Few is a biography of Peter Cook and who else? 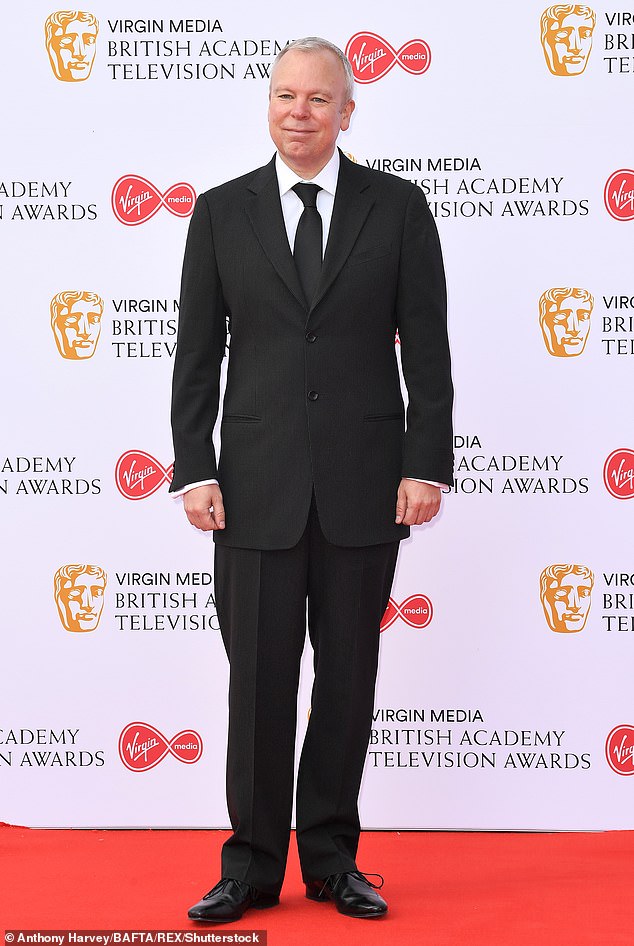 Comedian Ian Lavender, known for his portrayal of ‘stupid boy’ Private Pike in Dad’s Army, showed he was anything but after scoring ten his first round on the show in 2016.

1. In what type of restaurant are you most likely to eat a naan bread?

2. Henry Blofeld and Jonathan Agnew are best known for commentating on what sport?

3. Which Prime Minister said ‘I was the future once’ on his last day in office?

4. Which gardener is the Saturday morning DJ on Classic FM?

5. Brecon Beacons National Park is in what country of the UK?

6.  The black-and-white film The Lucky Dog was the first to feature what comedy duo?

7. What racecourse is roughly seven miles from Windsor Castle?

8. In the rhyme ‘Tinker Tailor Solider Sailor’, who follows Beggarman?

9. In the Bible, Jesus fed the five thousand with two fish and how many loaves?

10. Construction began on what California bridge in 1933? 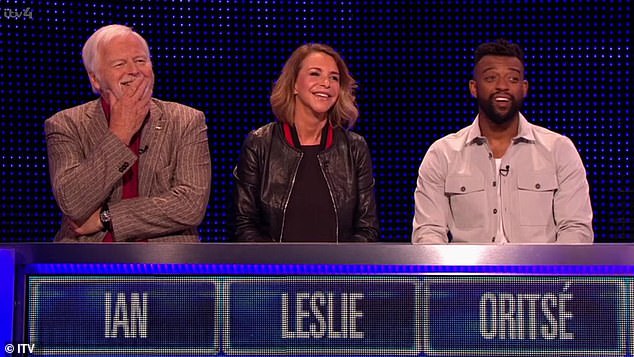 Comedian Ian Lavender (pictured with his fellow contestants), known for his portrayal of ‘stupid boy’ Private Pike in Dad’s Army, showed he was anything but after scoring ten his first round on the show

Rogue Traders presenter Matt Allwright might be known for his humorous antics, but he was all business when appearing on the show in 2016.

1. Complete the Guys and Dolls song: ‘Sit Down, You’re Rockin’ the…’ what?

2. What flowers share their name with a Cadbury’s chocolate assortment?

3. How many of the wives of Henry VIII died while still married to him?

4. What religious book gives it name to a so-called ‘Belt’ in the southern USA?

5. Which Scot co-organised the Live Aid concerts with Bob Geldof?

6. What director links the films Jabberwocky and Time Bandits?

7. A difficult situation is said to balance on the edge of what piece of cutlery?

8. In 2016, the Switch House opened as part of what modern art gallery?

9. Which British athlete retained his European long jump title in 2016? 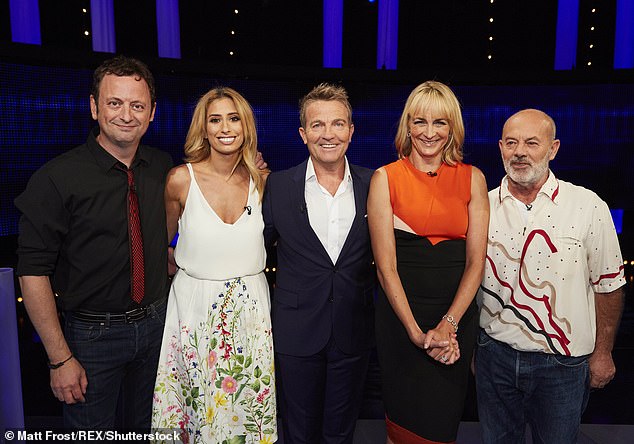 The Chase 10th Anniversary Quizbook will be available to purchase on October 3.