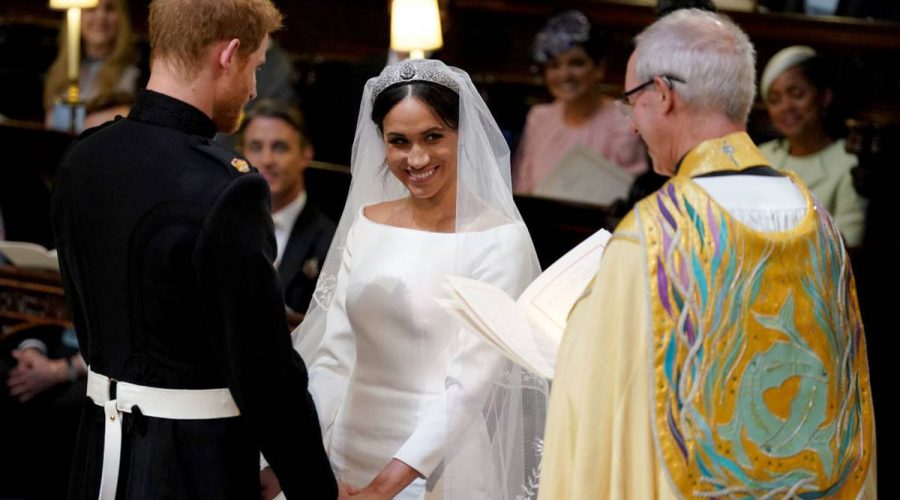 A vicar who claims he has insider knowledge says Prince Harry and Meghan Markle’s backyard wedding “did not take place”.

Rev Mark Edwards claims he discussed the event in a phone call with the Archbishop of Canterbury’s office and was told it was not as it seemed.

The Duke and Duchess of Sussex famously told Oprah Winfrey they had married “in our backyard” on the Wednesday before the televised public ceremony at Windsor Castle in 2018.

During the tell-all interview, Meghan said: “You know, three days before our wedding, we got married. No one knows that.

“The vows that we have framed in our room are just the two of us in our backyard with the Archbishop of Canterbury.”

Later in the interview, Harry stated that it was just the couple and the Archbishop of Canterbury, Justin Welby, present.

The ceremony was said to have been in a small garden of Nottingham Cottage at Kensington Palace, where the couple lived at the time.

Edwards, a Newcastle vicar, was flooded with private wedding requests during lockdown and claims he contacted the Archbishop’s office to “get some clarity” on the church’s policy, the Sun reports.

But the vicar claimed to the Sun he was told by a Lambeth Palace staff member that “Justin does not do private weddings. Meghan is an American, she does not understand”.

Edwards said the person – whose job title was not specified – that he spoke to then told him: “Justin had a private conversation with the couple in the garden about the wedding, but I can assure you, no wedding took place until the televised national event.”

According to the Church of England, weddings require at least two witnesses, and the public must have “unrestricted access” to the ceremony so objections can be lodged.

If a couple is already married, they legally cannot do it again, unless there was an issue with the first marriage. Experts believe from this that Harry and Meghan’s first wedding would not have been legally binding and likely just an exchange of intent.

The law also states that the Church of England weddings must take place in “a certified place of worship” and cannot be conducted outside.

The claims of a private wedding also raised doubts among members of the church and the public.

Edwards said it was “in the public interest for the leader of the church to put the record straight”.

He told ChronicleLive: “It puts us priests in a difficult position on what constitutes a Church of England wedding.

“Should there be witnesses and licensing and legality or is it now just an ad hoc arrangement with members of clergy? Can we now do private weddings without witnesses in our back gardens?

“Justin saying he refuses to comment is not helpful to the rest of us clergy and our own policies and practices.

“I have had people ask me during lockdown if they could have a private wedding, and I have had to explain that would not be a legal wedding and not according to canon law.

“I think we need a clarifying statement — we need to know what our policies and procedures are. It can’t appear to be one rule for one and another rule for another.”