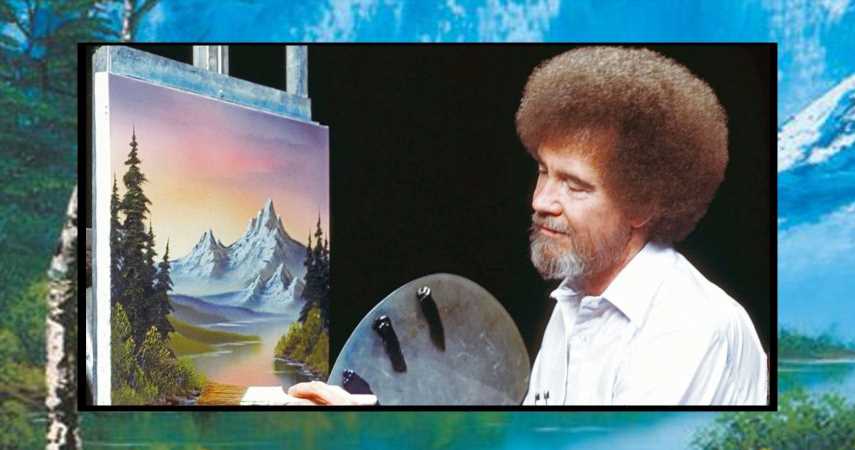 Artist Bob Ross is perhaps more famous today than he was during his PBS television show, The Joy of Painting which ran from 1983 to 1994.

His likeness was featured in a Mountain Dew commercial in the 2021 Superbowl and fans can easily find his image on t-shirts, plush toys, watches and more. In 2020, Hasbro released a Bob Ross Monopoly game featuring the icon and Netflix has released a documentary about the soft-spoken painter.

However, if you plan to purchase your own Bob Ross original, be wary. According to the staff at Bob Ross Inc., they have no plans to sell the 1,143 paintings they estimate to have in storage, making the vast majority of sales a mere copy of Ross’ work.

Ross passed away after a lymphoma diagnosis, shortly after his final season of The Joy of Painting, so whatever happened to the thousands of paintings and what will their future hold?

Ross Finds His Joy in Painting

The Daytona Beach native dropped out of high school and enlisted in the Air Force during the 1960’s. During his rise to the rank of master sergeant over 20 years, he was stationed in Alaska and in the meantime, discovered oil painting. According to Grunge, after taking classes from mentor Bill Alexander in Alaska, Ross retired from the military and returned to Florida, settling in Orlando.

He began taking classes through art schools and mastering his favorite technique, ‘wet on wet’; a process of layering paint one on top of the other. The process allows the artist to create work in a short time frame and once he began teaching his technique to others, Ross landed his own television show with the educational station.

The PBS series launched in 1983 and fans found Ross’ soft voice, bushy hair and positive rhetoric inspirational and refreshing. Ross made a habit of calling mistakes in his work, “happy accidents” and as he’d encourage viewers to try “happy little clouds” and “happy little trees” they’d watch in rapt attention.

According to CheatSheet, only an estimated three percent of viewers actually painted along with him but fell in love with his calm personality.

Purposefully choosing words that brought peace and joy to the painting process, Ross would make comments like, “Shoot, we have a pretty nice-lookin’ little sky” and as he changed gears, he’d pull out a specific brush and say, “Now then – let’s get crazy.”

With growing popularity, merchandise emerged for the rookie artist, including how-to books, art supplies and classes in which one could become an official Bob Ross instructor.

Ross painted three duplicate works for each of the 400 episodes of The Joy of Painting; one that sat behind the camera for his reference, one during the show itself and another to use for books and instruction manuals.

The Hunt For a Bob Ross Painting

Ross passed away at the age of 52 with an estimated net worth of $10 million. While Ross claimed he didn’t make a dime from the PBS program, his fortune came from teaching, merchandise sales and selling some of his now-famous landscape paintings.

What happened to the rest of the paintings? We can thank a team from the New York Times who hunted down the results of Ross’ 11-year television career.

His longtime business partner Annette Kowalski and her daughter Joan, the president of the Bob Ross Inc. company, have been storing them at their Virginia headquarters. Sadly, Kowalski explained the works were sitting in cardboard boxes, with no care for temperature control or other white glove handling.

According to TIME, the women hadn’t even considered selling the artwork because they felt it wasn’t what Ross would have wanted. They did, however, recently donate some of the paintings to the Smithsonian to join a permanent exhibit at the National Museum of American History.

While the exhibit is not on display as of yet, it’s reported to include other works from great American icons such as Julia Childs and Fred Rogers.

Though the paintings are not on display at this time and you’d be hard pressed to find one for sale, the few that have been sold, are estimated between $8,000 and $10,000. Fans have meticulously watched the PBS series (still airing reruns today) and have learned a few new things about their favorite landscape painter.

More than 91 percent of Ross’ paintings contain at least one “happy little tree”, but he didn’t care for flowers or palm trees. More than his dislike for painting palm trees or flowers, Ross only featured one person in his series of work, and that was of a silhouette.

Not only did fans love his calming voice and positive comments, Ross claimed he had received letters from people who say they sleep better when his show is on the television in the background. Perhaps that’s why, in a world where constant communication and noise is something difficult to escape, we still love to flip on the television and find Ross, with his soothing voice, explaining how to form those “happy little trees.”