‘The ONE TIME I ask him to watch her!’ Brilliant viral video captures mother’s horrified reaction after discovering her partner SHAVED their daughter’s head as a joke

A mom received the wake-up shock of a lifetime after her daughter’s father decided the shave the newborn’s head while in his care — and her reaction has quickly gone viral.

Jasmin Aileen Valero from California decided to leave her daughter, Jazlyn, with the father so that she could get some much-needed sleep.

But then footage shows Jasmin reuniting with her daughter after her nap to discover the baby’s hair is completely gone, and the change in style left the mother in tears. 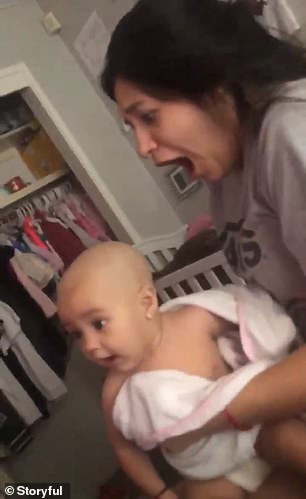 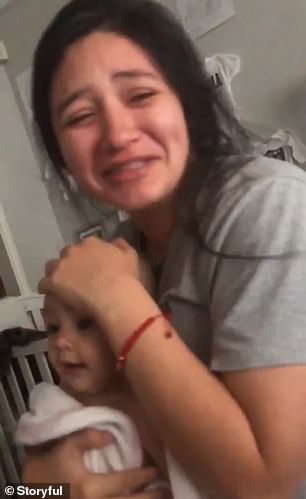 Surprise! Jasmin Aileen Valero from California asked her partner, Joseph Luevanoz, to watch their infant daughter while she took a nap 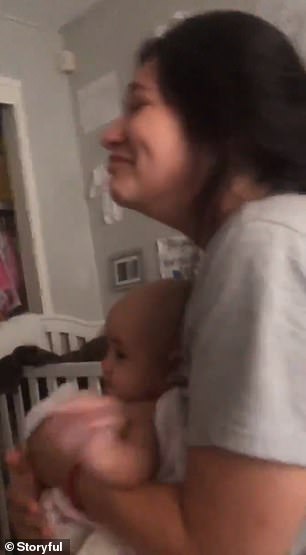 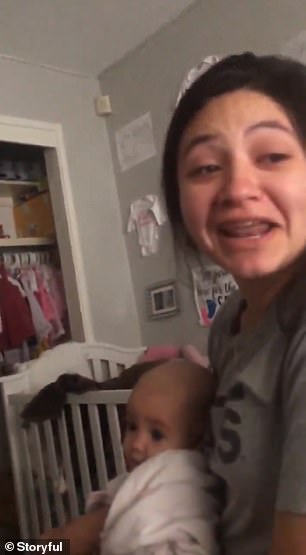 In tears: But when she woke up, the man surprised her by shaving the baby’s head. The video shows the baby, Jazlyn, all smiles while Jasmin cries over her hair

‘The one time I ask him to watch her so I can sleep in and…’ Jasmin wrote when sharing the video on Twitter. 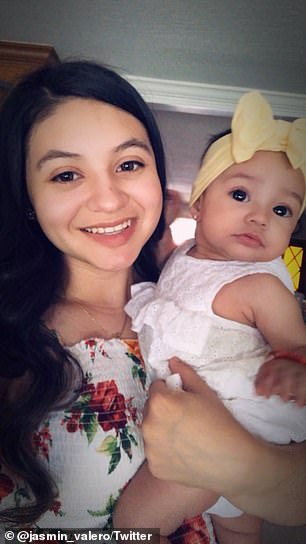 Before: Jasmin said she had no idea her partner was going to shave their daughter’s head . Pictured is the baby before the haircut

Her video, which was filmed by Jazlyn’s father, Joshua Luevanoz, quickly went viral and garnered more than 3.9 million views because of Jasmin’s stunned reaction to the shaved head.

In the video, Jasmin is seen bouncing Jazlyn on her lap while the baby’s head is covered by a towel.

The mom appears to have no clue the baby’s head is shaved until the father pulls the towel off her head to reveal the new haircut.

Jasmin’s mouth instantly dropped open by the reveal, and she let out a scream in shock to signal to her partner she was unhappy by the surprise cut.

In the background, Joshua is heard laughing during the reveal.

Deciding the shave the youngster’s head was not completely random, though, as it is custom in Mexican families to shave the head at a young age ‘so their hair can grow thicker and nicer,’ Jasmin told Storyful.

The couple had previously discussed doing it with their daughter but had not decided on a specific time.

‘My daughter’s father and I had agreed we were not going to do that until that day where I had asked him if he can watch her so I can sleep in a bit longer and he woke me up with that surprise,’ she added.

‘I was heartbroken because my baby went from a full head of hair to none at all, but as you can see she was not bothered one bit. Always such a happy baby.’

The baby did appear to be all smiles even though her mom was crying over the shaved head.

Commenters online had a lot of opinions about the surprise, with some unimpressed with the father’s decision to pull the prank.

‘This wasn’t funny, this is child abuse,’ one commenter wrote.

‘This is the type of thing men do so they are never again given the responsibility of taking care of their own child. Don’t fall for it,’ another person commented.

Jasmin has since shared images of her daughter modeling the shaved head, showing she moved on from the prank.