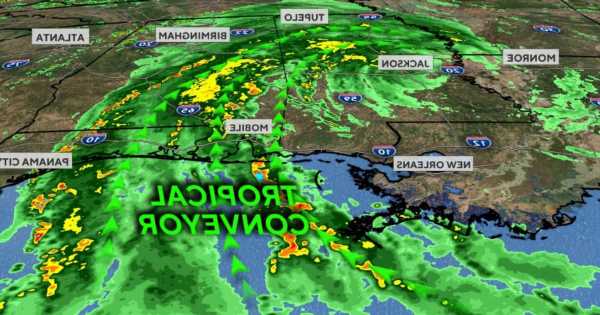 After slamming into Louisiana with wind gusts of up to 172 mph and 15 inches of rain, Ida is weakening and heading north. But as the storm moves inland, the threat of dangerous flash flooding increases far away from the Gulf Coast.

From now through Thursday, the storm is forecast to cover a lot of real estate, bringing with it a tropical connection of moisture from the Gulf of Mexico. 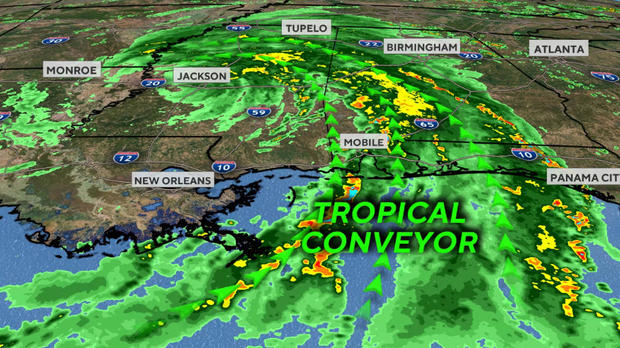 What is especially concerning is that the computer models are showing as much as 10 inches of rain in store for the Northern Appalachians.

Right now the storm is still located in the Southeast, having weakened substantially from the Category 4 monster it was when it made landfall in Grand Isle, Louisiana. Sustained winds are now dropping below 40 mph.

Next the storm will move through Birmingham, Alabama, and Atlanta, Georgia, into central Tennessee by tomorrow. Along its path, several inches of rain will fall and tornadoes are likely, especially on the east side of the storm’s circulation.

Although the general wind threat is winding down, some storms will produce damaging wind gusts and more scattered power outages. 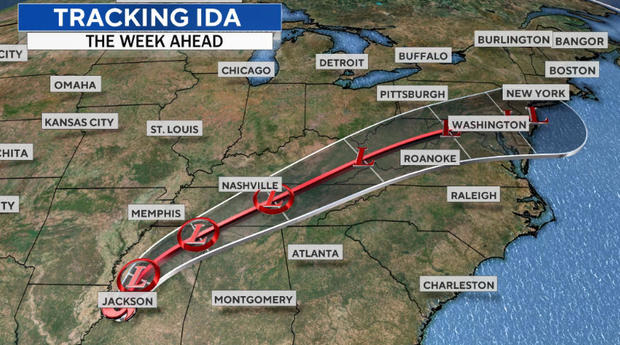 But perhaps the biggest threat will come on Wednesday. This is when the system will crash into the hilly terrain in and near the Appalachians. The tropical moisture being carried by Ida will then be squeezed out at a faster rate, leading to torrential downpours. Much of the rain will runoff from the hills into the valleys, creating a risk for dangerous flash floods.

The latest weather computer models show rainfall of several inches, with isolated locations picking up to as much as 10 inches. The largest threat looks to be the hills and mountains from eastern Kentucky northeastward through West Virginia, Maryland and Pennsylvania.

When Tropical Storm Fred moved across the Southern Appalachians, it dumped up to 20 inches of rain, causing devastating flooding and mudslides and reportedly killing 6 people. It illustrates the danger of tropical moisture running into mountains. 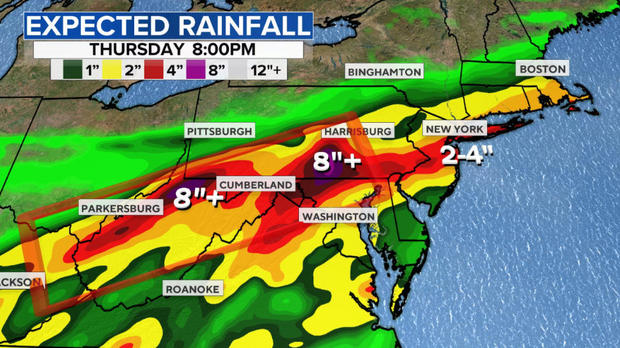 On Wednesday night and Thursday, what’s left of Ida will move through the Mid-Atlantic, Northeast and New England. For this area, Ida will be the third tropical storm, including Fred and Henri, in the past two weeks. Much of the area has seen far above normal rainfall and the ground is saturated. With 2 to 5 inches forecast, flooding is again likely.

The storm will also spawn tornadoes across the Mid-Atlantic and Carolinas as unstable hot air meets tropical moisture and the rotation of Ida.

The storm will finally exit later Thursday as it heads into the Atlantic Ocean.