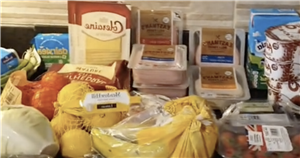 A mum-of-ten has left people stunned with her huge weekly food shop which takes up her whole kitchen.

However, Dana Stockman shocked people even more as she revealed the shop doesn't actually last them a week, but just four days.

The parent took to TikTok to share her mammoth family shop, much to people's disbelief.

The busy mum laid it all out on her bench top, and it completely took over her massive kitchen.

The haul, which included huge amounts of cereal, crisps, fresh fruit and milk, was seen as the mum panned her camera around the kitchen.

And despite the tons of food, she admitted it would only last four days.

This is apparently a small shop too, as Dana claimed she "didn't need a lot" this week.

People were amazed, as one person admitted they wanted to see her fridge too.

While another exclaimed: "Wowzers! I wouldn't have room to store it all, bet you're glad you have a big kitchen."

A third chimed in: "I'd hate to put that all away."

Someone else also asked how much she Dana spends on food, as she quipped back "too much."

It's easy to see how she spends out so much on food, as in another video she showed the huge amount of food it takes just to feed her family breakfast.

Many were again left stunned as one exclaimed: "Now that's what I call a fry-up."

As another joked: "Can I come for breakfast?"

Dana said in the comments that it takes about 40 minutes to cook, and that people often judge her for "bulk buying" food items.