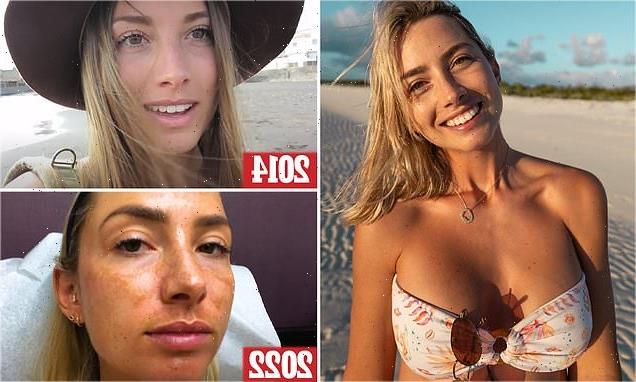 The dark side of ‘living the dream’: Mum-of-two, 28, shares shocking skin damage to her face after sailing the world with her family full time

An Australian mother who spends her days travelling around the world on a yacht has shared the heartbreaking skin condition she has been dealing with while on board.

Riley Whitelum, 37, and Elayna Carausu, 28, have developed a combined following of more than 764,000 users on Instagram while documenting their life sailing around the world aboard a luxury yacht with their two young children.

On Tuesday Elayna posted a video titled ‘Why I’ve been distant lately’, explaining that suffering with melasma in patches on her skin has left her feeling self-conscious and introverted. 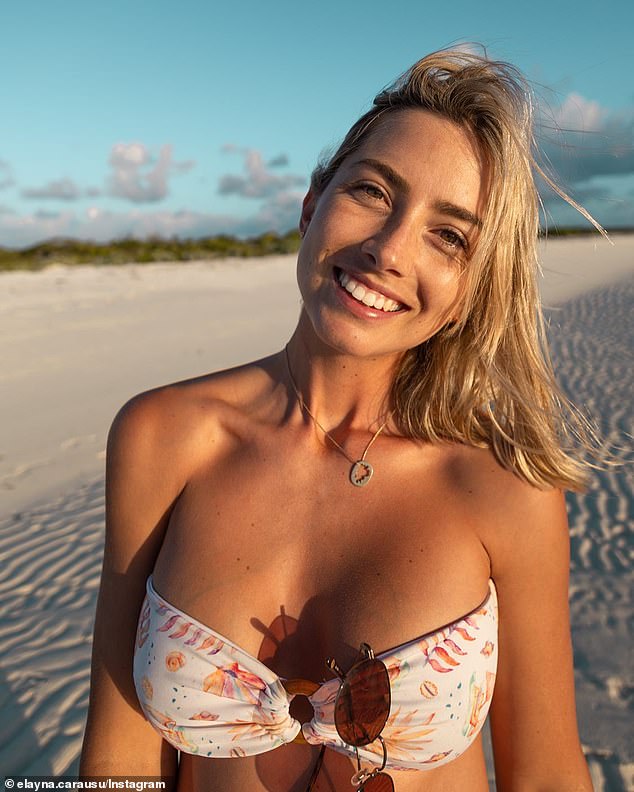 On Tuesday Elayna posted a video titled ‘Why I’ve been distant lately’, explaining that suffering with melasma in patches on her skin has left her feeling self-conscious and introverted

‘Only now do I feel confident enough on camera for you to see me and this issue which has been really getting me down over the years,’ she said.

‘I realise this is so small but to me this has weighed heavy on my mind.’

Elayna first started noticing melasma, which can be caused by sun exposure and hormone changes, in 2018 while she was pregnant with her first son Lenny, only for it to get worse with her second pregnancy.

‘I love freckles but not these freckles in patches,’ she said.

Elayna in 2014: She thought back to her skin pre-pregnancy and how clear it was 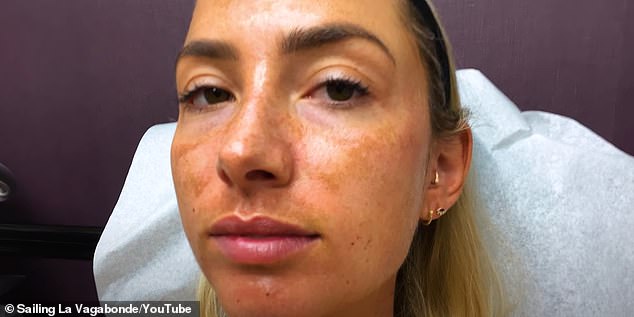 Elayna in 2022: She now gets Fraxel done every six months to get rid of the melasma temporarily

Fraxel became the most effective procedure she could use for six months at a time despite being ‘very painful’.

It’s a type of laser that resurfaces the skin completely, almost ‘melting’ off the top layer to reveal smooth, freckle-free epidermis.

‘When it gets bad I’m withdrawn and distant from the camera,’ she said.

Elayna has had three Fraxel treatments so far and said she will continue to book them in every six months to give her the confidence to be on camera.

In April the travelling couple came under fire after they posted a video of them feeding a shark from their boat just centimetres away from their toddler.

Elayna posted a short video of the couple with their two-year-old Lenny standing on the edge of the boat as Riley fed a thrashing shark that was so close it was bumping against the yacht. 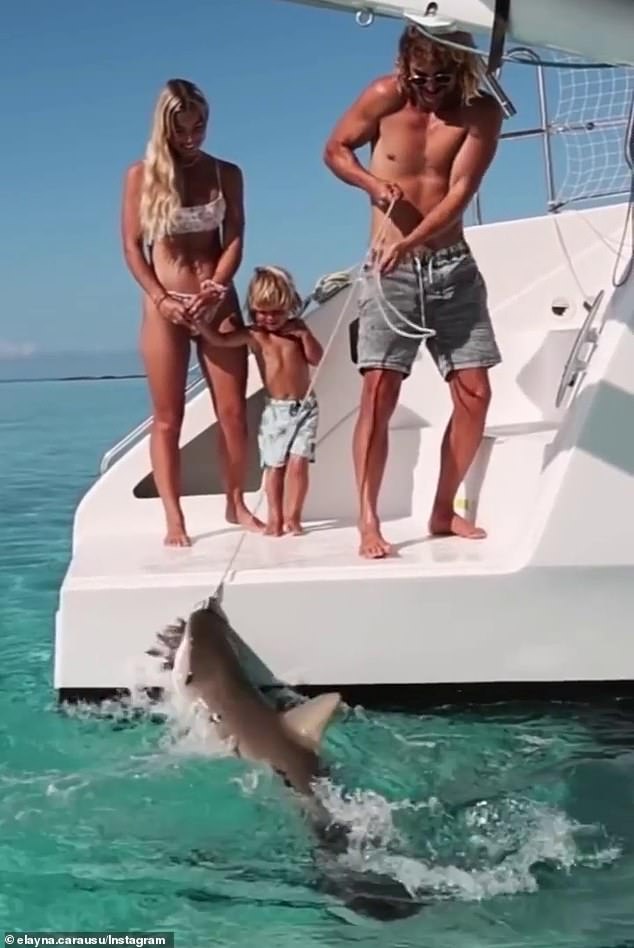 Riley Whitelum, 37, and Elayna Carausu, 28, have come under fire after they posted a video of them feeding a shark just centimetres away from their two-year old Lenny

Many in the comments were quick to condemn the adventurous couple’s ‘irresponsible’ actions they say put the toddler at risk.

One viewer wrote: ‘I don’t think these videos are worth the risk you’re putting your family in. I’m afraid one day this is going to backfire for you. The “clicks” aren’t worth it.’

‘Not cool. Your child looks scared. You won’t get my support on content like this, I’m unfollowing,’ said a second.

‘It’s scary to see a child so close to that,’ commented a third. 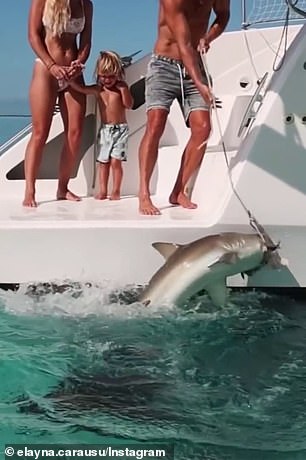 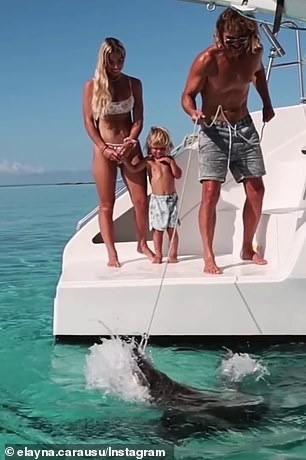 Elayna posted a short video of the couple with their two-year-old, Lenny, standing on the edge of the boat as Riley fed a thrashing shark that was so close it was bumping against the yacht

Others were concerned handfeeding sharks could lead to an attack.

‘Great! Now sharks will be coming up to boats expecting to be fed. Some poor kid will be in the water and get chomped,’ one woman responded.

‘This is terrible and super irresponsible, you are training sharks to associate human interaction with getting fed!’ another agreed.

‘Isn’t this kind of training sharks to attack things that fall off the back of boats? Could this make them more aggressive around swimmers?’ said a third. 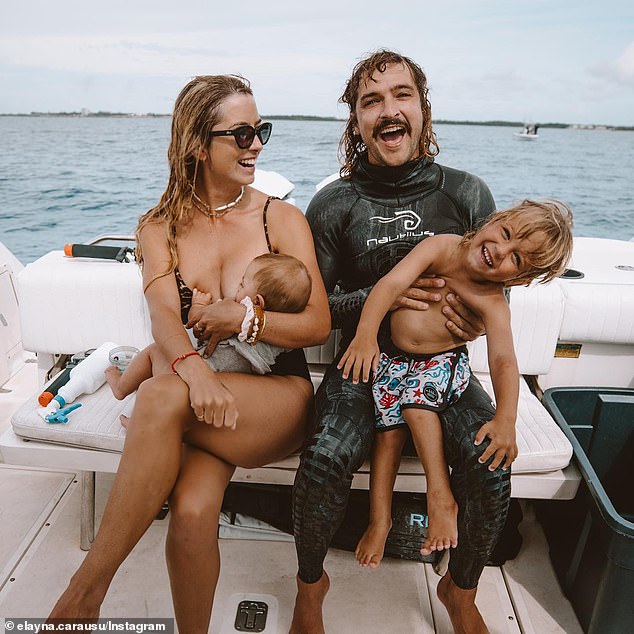 There were some viewers who took to defending the couple and praising Lenny for his bravery when so close to the predator.

One fan noted that the courageous toddler ‘didn’t even flinch’ at the sight of the shark.

‘Little Lenny is going to be fearless in life, good job,’ said another.

‘As insanely experiences and knowledgeable parents who have dedicated their whole existence to the ocean, I feel they are entitled to teach their children about every element of the ecosystem they are very much apart of,’ a commenter wrote.

This isn’t the first time Elayna and Riley have copped criticism for letting Lenny get up close and personal with sharks.

In February they raised eyebrows after sharing a YouTube clip of the two-year-old snorkelling at Jaws beach in Nassau, the capital of the Bahamas, surrounded by Caribbean reef sharks and nurse sharks. 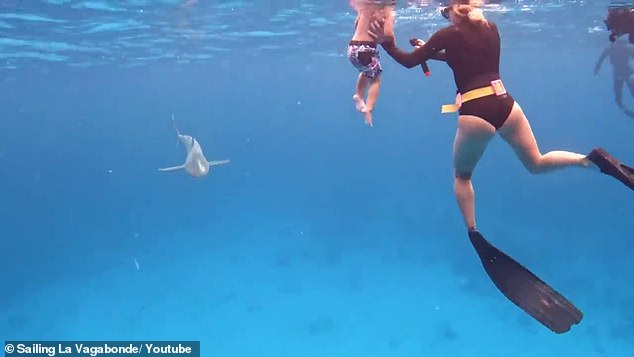 Previously, they raised eyebrows after sharing a clip of Lenny snorkelling at Jaws beach in Nassau, the capital of the Bahamas, surrounded by Caribbean reef sharks and nurse sharks

‘A lot of people would think diving with a two-year-old in the water with sharks is crazy but we trusted Andre [their instructor] and he’s an expert,’ Elayna said.

Lenny was told to lightly step into the water rather than jump because the splashing would alert the surrounding sharks to his presence.

‘Wow that was a big one! So many sharks,’ the excited toddler, wearing a pair of blue goggles and boardshorts, said.

Plenty of the couple’s fans were excited to witness Lenny’s big day in the ocean.

‘I’m so proud of Lenny! Swimming with the sharks! He’s so brave,’ one woman wrote.

‘I think you’ll have a lot of viewers questioning their fears after this one… me included. Cautious, calm bravery is how I would describe it,’ said another.

A third added: ‘Fair warning, some Karen is definitely going to get into your personal parenting business and call child welfare for letting Lenny swim with sharks. It’s bound to happen.’